Why do deep-sea fish glow?

Q3. Why do deep-sea fish glow?

Many deep-sea fish, including the famous deep-sea ceratioid anglerfishes, emit light. Why do they make parts of their bodies glow? Is it for lighting?
A. To lure prey and to make themselves less visible. 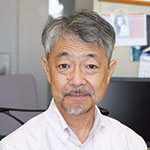 The deep sea is dark and cold, with virtually no sunlight. The deep-sea ceratioid anglerfishes are some of the most well-known creatures that inhabit these waters at depths of over 200 meters. The fishing rod-like object protruding from the head of these deep-sea fishes is part of their dorsal fin and is called the illicium. At the tip of the illicium is a bioluminescent organ called an esca, which is a lure-like body on which light-emitting bacteria live. In the deep, dark sea, this organ glows to attract shrimp and small fish as food. Also, although this is only speculation, it is possible that these fish communicate with other members of their own species using this organ.

The deep-sea ceratioid anglerfishes spend their lives floating between the sea surface and the sea floor, and the shapes of their esca differ between species. So far, 166 species have been identified, and each species is recognized by these bioluminescent organs.

Many deep-sea fish are bioluminescent. However, unlike the deep-sea ceratioid anglerfishes, most have their bioluminescent organs on their abdomen. Since the little light that penetrates into the sea comes from above, they are believed to counteract the shadows by causing their abdomens to glow, making them harder to spot from below. The color of these organs actually differs depending on the species. I have seen blue, green and pink ones (unfortunately, I haven’t seen a deep-sea ceratioid anglerfish when it’s emitting bioluminescent light).

As deep-sea ceratioid anglerfishes live in the deep sea, it is very difficult to catch them, and they are rarely seen. Thus, I was fortunate to capture a female Cryptopsaras couesii Gill 1883 in very good condition during a research cruise conducted aboard the academic research vessel Hakuho Maru in 2000. My knees shook when I found this specimen among the fish in the net. This female had eight males parasitized on its body surface. I caught an ichthyologist’s dream!

Among the 166 identified species of deep-sea ceratioid anglerfishes, 25 species are known to have males that parasitize the females’ body surface. After attaching itself, the male receives nourishment from the female and continues to grow and mature. The males are believed to have evolved this way because, if they are always with the females, they can fertilize and produce offspring whenever convenient. Multiple male parasites are also beneficial in terms of maintaining genetic diversity, as they can produce offspring with different traits.

How do males find females to parasitize? Looking at the male from the front, there is a pair of very large nostrils at the center of the head. Within that nasal cavity is a very well-developed odor-sensing organ called the olfactory rosette. Males are thought to use the organ to detect the scent of female pheromones. Males that fail to become parasites seem to die when they grow to a certain size. It’s a tough world.

We are also continuing our research on the ecology of the deep-sea fish, Chlorophthalmus albatrossis (commonly known as “mehikari,” or “greeneye” in English). It is tasty when fried, and juveniles can be caught in large numbers. As they grow older, however, they disappear from fishing grounds all over Japan. They are thought to depart on their spawning migration, but it is not clear how far they travel. All deep-sea fish remain full of mysteries.