Why do satellites not fall?

Q5. Why do satellites not fall?

After being launched into space, satellites continue to orbit the Earth. Why do they not fall to the ground?
A. Actually, they are in a constant state of falling. 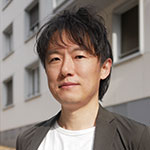 If there are no obstacles, they will keep flying

Satellites orbit the Earth at tremendous speeds while they continuously fall. The most important factor affecting their flight is the presence or lack of obstacles. As long as there is nothing to obstruct them, they can keep moving. For example, if you dig a hole from Japan to Brazil to create a vacuum tunnel and drop a ball into it, the ball will continue to fall with increasing speed and finally reach the center of the Earth since there are no obstacles. Because there is nothing in the center of the Earth that would stop the ball, the momentum keeps it going to the Brazilian side. When it reaches the surface of Brazil, gravity applies the brake, and the ball slows down and stops. Then it falls toward the center again, repeating this back and forth. Satellites continue to fall in the same way.

In other words, the essential requirement is to come up with a speed and height that would put the satellite into an orbit where it wouldn’t hit any obstacles. For spacecraft that orbit close to the Earth at an altitude of around 400 km, such as the International Space Station (ISS), a speed of just under 8 km per second is necessary. At this speed, one could complete a full marathon in about 5 seconds. At about 400 km altitude, there is still a small amount of atmosphere, and the satellite will gradually fall to the Earth because of atmospheric drag. Hence, the ISS adjusts its orbit by occasionally firing the thrusters. The more distant the satellite is from the Earth, the thinner the atmosphere gets. For example, if the satellite is at an altitude of 1,000 km, it will not fall for about 1,000 years even if left alone.

Focusing on space propulsion systems that use water as propellant

I am researching space propulsion systems, which are an integral part of these satellites. To accelerate an object, something must be pushed. For example, when we walk, we push the ground. Airplanes accelerate by pushing the air. The propulsion system is the pushing device. Since there is nothing to push around in space, space propulsion accelerates by throwing off its own mass (propellant); this is called rocket propulsion. There are many different types, but I focus on propulsion that uses water as the propellant. The simplest type is one that uses water vapor as the pushing power, as it spreads out when liquid water is turned into vapor. Another is the ion propulsion used in the Hayabusa spacecraft, which ionizes water vapor into a state called plasma and pushes it out by applying a voltage to it.

The advantage of water is that it is easy to handle and procure. In recent years, many different companies have been entering the space industry. We see significant advantages for these new players in using water, which is non-toxic. As water has been found on the Moon and Mars, it may become possible to source it in space. We can easily have our own personal satellites, fly space probes, and go to space. This may sound like a science fiction world, but I am envisioning such a future.