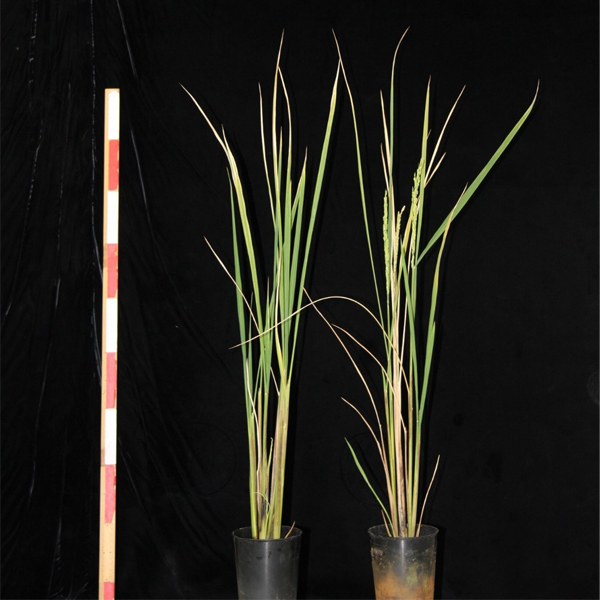 Agrochemical controls flowering in new rice strain
A new rice strain flowers only when administered Routine or Oryzemate, a common agrochemical developed to fight fungal disease. Unsprayed plants, on left, did not flower, while the ones administered the chemicals, on right, flowered 35 days after they were sprayed.
© 2017 Takeshi Izawa.

A new strain of rice that flowers within a certain period of time after being sprayed with commercial chemicals commonly used to protect rice from fungal diseases is now available, say Japanese scientists. This new strain could one day allow rice farmers to dictate the timing of their harvest regardless of weather, temperature, and other conditions that currently affect cultivation.

Temperature, day length, and other environmental cues determine when plants flower, making it difficult for farmers to control when to harvest their crops. While scientists have been able to artificially manipulate the flowering of small flowering plants like Arabidopsis thaliana, they had so far not been successful in such influence over cereal crops.

A group of Japanese scientists led by Professor Takeshi Izawa at the University of Tokyo's Graduate School of Agricultural and Life Sciences developed a new rice strain that flowers 40 to 45 days after being administered a common agrochemical, commercially known as Routine or Oryzemate, that prevents rice from being infected by a damaging disease called rice blast.

The scientists first created a non-flowering strain by overexpressing a gene (Grain number, plant height and heading date 7, Ghd7) that suppresses flowering genes (florigen genes) which induce flowering at the tip of plants under short-day conditions. Then Izawa and his colleagues modified the florigen gene Heading date 3a (Hd3a) in the non-flowering rice strain so that it would be activated in response to certain agrochemicals. When they tested the rice strain in laboratory conditions and in pots under natural field conditions in Tsukuba, a city 70 km north of Tokyo, in Ibaraki Prefecture, the researchers observed that the new strain flowered in about 45 days after administering the chemicals. In the experiment spanning over two years, they repeatedly observed flowering only after spraying.

Izawa, who has been working on molecular mechanisms behind plant flowering for more than 20 years, thought that there would be a handful of promoters—genetic regions that switch on the gene—that will make the Hd3a respond to certain agrochemicals. “We identified 12 candidate promoters using a technique called ‘field transcriptome analysis' that reveals which genes are activated in response to Routine or Oryzemate under natural cultivation conditions. We tested the efficacy of all the promoters and found that only one could be used to fulfill our purposes, instead of several as we had hoped.”

Izawa continues, “I'd like to understand the science behind our new strain, because we've only been successful in manipulating the flowering of plants that are hemizygous, that is, plants that have only one copy of a gene instead of two.”

The next challenge for the researchers is to see if the new strain flowers in rice paddies and various other field conditions, so that farmers will one day be able to decide when to harvest their rice grains.