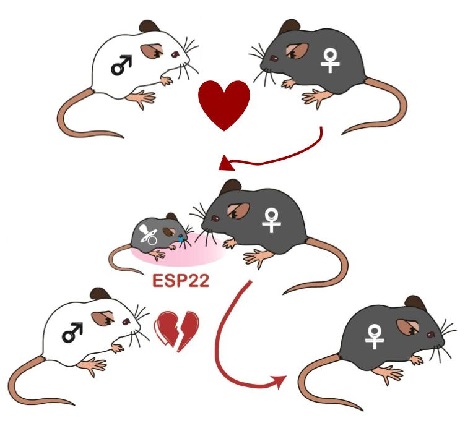 Direct connections between human and mouse behavior cannot be made because pheromones are highly species specific.

“If humans can detect anything in tears, we won’t use the same pheromone signal or receptor as mice. But we are investigating if species share the basic neurocircuitry of how the brain processes an olfactory signal to affect behavior,” said Professor Kazushige Touhara, leader of the research project.

Researchers hope to use the tear pheromone as a natural mouse birth control to reduce mouse populations in the future.

“It is unlikely that other animals would be affected because pheromones are so species specific. The sex-rejecting behavior is an innate instinct, so it’s also unlikely that the mice will learn to change their behavior or ignore the artificial pheromone,” said Touhara.

Only juvenile mice aged one to three weeks produce the pheromone, called exocrine gland-secreting peptide 22 (ESP22). ESP22 is not airborne and lacks a noticeable odor, but the pheromone spreads around the territory as mothers and young mice wipe tears while grooming.

“ESP22 is difficult to artificially synthesize, so we want to find a smaller portion of the pheromone molecule that could be added to mouse drinking water. This could prevent mice breeding in areas where they are pests,” said Touhara.

ESP1 is an adult male pheromone that Touhara’s research group has previously studied for its role in enhancing female acceptance of sex. In this new study, researchers tracked how ESP22 and ESP1 are received and processed by the adult female mouse brain.

Both sex-rejecting ESP22 and sex-accepting ESP1 pheromones are recognized by single, dedicated receptors in the nose. Specific neurons send the different pheromone signals to the brain. The presence of similar but specific ESP1 and ESP22 receptors helps reveal how animals evolved the ability to detect and interpret pheromone signals.

“The discovery of only one receptor for each pheromone shows us that single molecules can drastically affect animal behavior,” said Touhara.

Pheromones in the brain

Pheromone signals are routed to the medial amygdala, a small group of neurons in the brain.

“The medial amygdala is like a hub to receive and reroute pheromone signals,” said Kentaro Ishii, a co-first author of the research paper and fifth-year doctoral student working with Touhara.

“The medial amygdala is still very mysterious, so we are excited to discover more details about how pheromone signals are sorted and routed after they are received there,” said Ishii.

“Additionally, we want to understand the complexity of how the brain computes and sorts olfactory signals in a natural environment, where animals are simultaneously exposed to many different pheromones and other chemical signals all the time,” said Ishii.

The paper is published by Nature Communications. Collaborators at RIKEN Center for Brain Science in Japan and Harvard Medical School in the U.S. also contributed to the research.