Plants don't need noses to smell. The ability is in their genes. Researchers have discovered the first steps of how information from odor molecules changes gene expression in plants. Manipulating plants' odor detection systems may lead to new ways of influencing plant behavior.

The discovery is the first to reveal the molecular basis of odor detection in plants and was more than 18 years in the making.

"We started this project in 2000. Part of the difficulty was designing the new tools to do odor-related research in plants," said Professor Kazushige Touhara of the University of Tokyo. 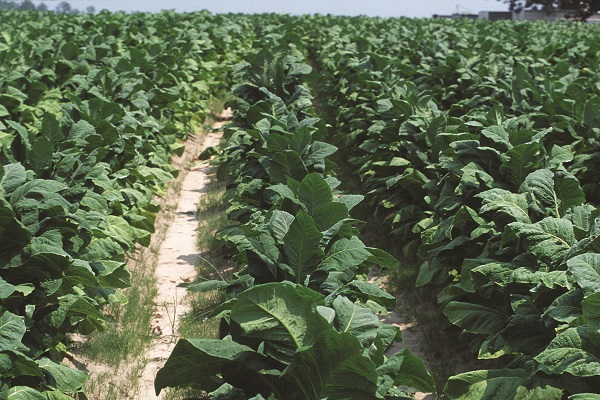 Tobacco plants growing on a farm in North Carolina, USA. Researchers at the University of Tokyo used tobacco seedlings, a common model organism in research labs, to study how plants smell. The discovery is the first to reveal the molecular basis of odor detection in plants. Image courtesy of United States Department of Agriculture (USDA).

Plants detect a class of odor molecules known as volatile organic compounds, which are essential for many plant survival strategies, including attracting birds and bees, deterring pests, and reacting to disease in nearby plants. These compounds also give essential oils their distinctive scents.

Touhara's team exposed tobacco cells and 4-week-old tobacco plants to different volatile organic compounds. They discovered that odor molecules change gene expression by binding to other molecules called transcriptional co-repressors that can turn genes on or off.

In plants, the odor molecules must move into the cell and accumulate before they affect plant behavior. In animals, odor molecules are recognized by receptors on the outside of cells in the nose and immediately trigger a signaling pathway to recognize the odor and change behavior.

"Plants can't run away, so of course they react to odors more slowly than animals. If plants can prepare for environmental change within the same day, that is probably fast enough for them," said Touhara.

Speed is unnecessary for plants, but they may be able to recognize a much greater variety of odor molecules.

"Humans have about 400 odor receptors. Elephants have about 2,000, the largest number in animals. But based on how many transcription factor genes are in plants, plants may be able to detect many more odors than animals," said Touhara.

Touhara imagines applying these discoveries to influence crop quality or character without the complications of gene editing or pesticide use. Farmers could spray their fields with an odor associated with a desired plant behavior. For example, an odor that triggers plants to change the taste of their leaves to deter insects.

"All creatures communicate with odor. So far, our lab has studied within-species communication: insect to insect, mouse to mouse, human to human. This understanding of how plants communicate using odor will open up opportunities to study ‘olfactory' communication between all creatures," said Touhara.

The University of Tokyo research team made their discoveries using tobacco plants, a common model organism. They expect research teams around the world will soon verify the discovery in many other types of plants.

The research is published by The Journal of Biological Chemistry on February 15, 2019, available online on December 28, 2018.