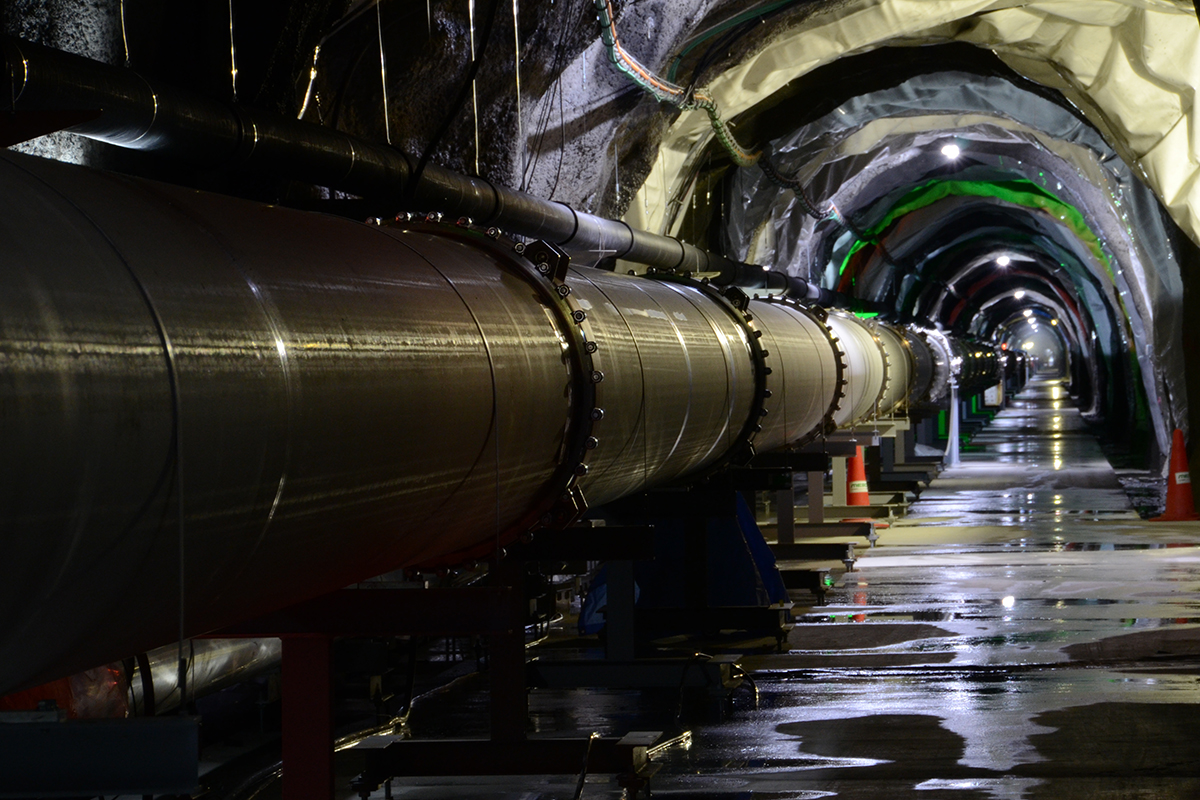 Researchers have designed a way to give the long tunnel arms of gravitational-wave observatories like KAGRA, seen here, the ability to potentially also detect axion dark matter. © 2019 University of Tokyo Institute for Cosmic Ray Research

Dark matter is only known by its effect on massive astronomical bodies, but has yet to be directly observed or even identified. A theory about what dark matter might be suggests that it could be a particle called an axion and that these could be detectable with laser-based experiments that already exist. These laser experiments are gravitational-wave observatories.

The hunt is on for dark matter. There are many theories as to what manner of thing it might turn out to be, but many physicists believe dark matter is a weakly interacting massive particle, or WIMP. What this means is that it does not interact easily with ordinary matter. We know this to be true because it hasn’t been seen directly yet. But it must also have at least some mass as its presence can be inferred by its gravitational attraction.

There have been enormous efforts to detect WIMP dark matter, including with the Large Hadron Collider in Switzerland, but WIMPs haven't been observed yet. An alternative candidate particle gaining attention is the axion.

“We assume the axion is very light and barely interacts with our familiar kinds of matter. Therefore, it is considered as a good candidate for dark matter,” said Assistant Professor Yuta Michimura from the Department of Physics at the University of Tokyo. “We don't know the mass of axions, but we usually think it has a mass less than that of electrons. Our universe is filled with dark matter and it’s estimated there are 500 grams of dark matter within the Earth, about the mass of a squirrel.”

A schematic for the proposed instrument to hunt for axion dark matter. The project is ongoing at the University of Tokyo Institute for Cosmic Ray Research. © 2019 Nagano et al.

Axions seem like a good candidate for dark matter, but since they may only interact very weakly with ordinary matter, they are extraordinarily difficult to detect. So physicists devise increasingly intricate ways to compensate for this lack of interaction in the hope of revealing the telltale signature of dark matter, which makes up over a quarter of the visible universe.

“Our models suggest axion dark matter modulates light polarization, which is the orientation of the oscillation of electromagnetic waves,” explained Koji Nagano, a graduate student at the Institute for Cosmic Ray Research at the University of Tokyo. “This polarization modulation can be enhanced if the light is reflected back and forth many times in an optical cavity composed of two parallel mirrors apart from each other. The best-known examples of these kinds of cavities are the long tunnel arms of gravitational-wave observatories.” 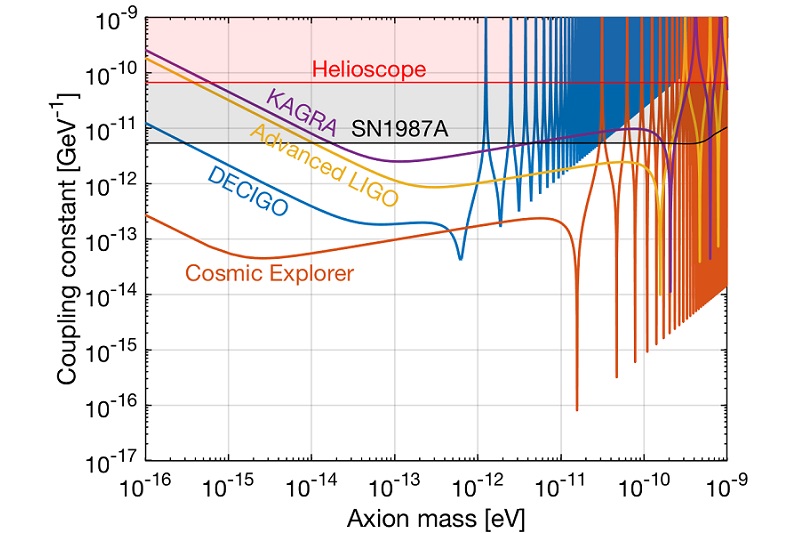 This chart compares the sensitivity of gravitational-wave detectors suitable for the axion hunt. The project is ongoing at the University of Tokyo Institute for Cosmic Ray Research. © 2019 Nagano et al.

Dark matter research does not get as much attention or funding as other more applicable areas of scientific research, so great efforts are made to find ways to make the hunt cost-effective.

This is relevant as other theoretical ways to observe axions involve extremely strong magnetic fields which incur great expense. Here, researchers suggest that existing gravitational-wave observatories such as the Laser Interferometer Gravitational-Wave Observatory (LIGO) in the USA, Virgo in Italy or KAGRA in Japan could be cheaply modified to hunt for axions without detriment to their existing functions.

This idea has promise because the upgrades to the gravitational-wave facilities would not reduce the sensitivity they rely on for their primary function, which is to detect distant gravitational waves. Attempts have been made with experiments and observations to find the axion, but thus far no positive signal has been found. The researchers’ proposed method would be far more precise.

“There is overwhelming astrophysical and cosmological evidence that dark matter exists, but the question ‘What is dark matter?’ is one of the biggest outstanding problems in modern physics,” said Nagano. “If we can detect axions and say for sure they are dark matter, it would be a truly exciting event indeed. It’s what physicists like us dream for.”