A male lemur rubs special glands on his wrists against his tail and then waves his tail at a female. A research project led by the University of Tokyo has identified odors released by the wrist gland that may be the first identified sex pheromones in primates. Video by Chigusa Tanaka, Japan Monkey Centre, CC BY 4.0

Three chemicals with floral, fruity scents are likely essential ingredients in the natural cologne male ring-tailed lemurs use to attract a mate. Experts in odor communication say these chemicals could be the first fully identified sex pheromones in primates.

During the yearly breeding season, male lemurs rub glands on their wrists against their fluffy tails and then wave their tails at females, a behavior called “stink flirting.” Only ring-tailed lemurs (Lemur catta) have these wrist glands and exhibit "stink flirting" behavior. The wrist glands produce a clear liquid, never before examined in detail.

“What made our study different is that we have expertise in chemistry, while most studies of animal communication are done by ecologists,” said Professor Kazushige Touhara, an expert studying olfaction, the sense of smell, at the University of Tokyo and leader of the recent research study, published in Current Biology. 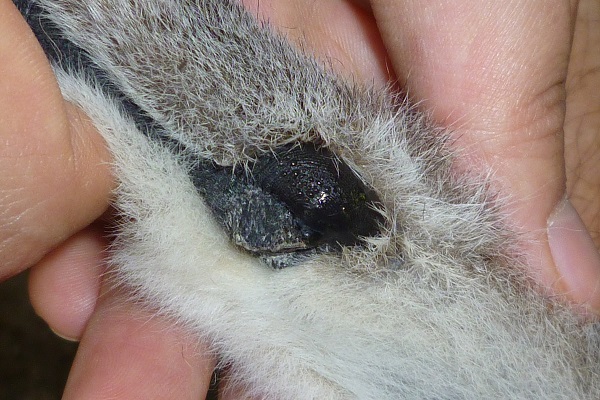 Antebrachial glands on the wrists of male lemurs release a clear liquid that contains odors that may attract females. © Satomi Ito, Kyoto University CC BY 4.0 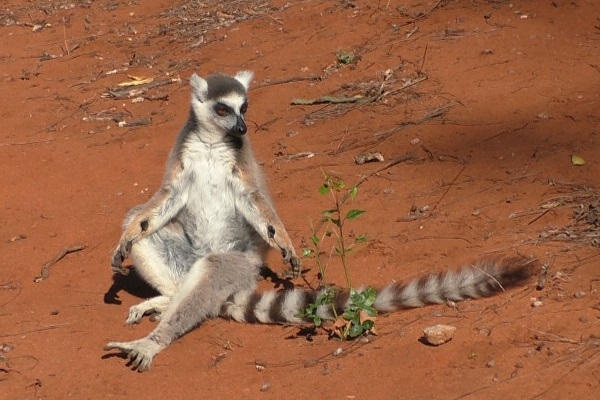 The antebrachial and brachial glands of male lemurs are visible as black spots above each wrist and on the chest. © Chigusa Tanaka, Japan Monkey Centre CC BY 4.0

Researchers collected the clear liquid from males’ wrist glands during both the breeding and nonbreeding seasons, then analyzed its chemical components.

The analytical technique gas chromatography-mass spectrometry can identify chemicals based on their electrical charge, molecular weight and other aspects. The research team also benefited from newer technology that can analyze small samples without complicated pretreatment.

Three odor compounds (dodecanal, 12-methyltridecanal and tetradecanal) were more abundant and one (acetamide) was less abundant in the wrist gland liquid collected during the breeding season.

Male lemurs’ testosterone levels are naturally higher during the breeding season and at younger ages.

When researchers artificially increased the testosterone of a healthy, young male lemur during the nonbreeding season, the amount of the odor compounds tended to increase, similar to breeding season levels.

"This increase really supports the connection between testosterone and these odor compounds,” said Project Assistant Professor Mika Shirasu, a member of the Touhara lab and co-first author of the research publication. 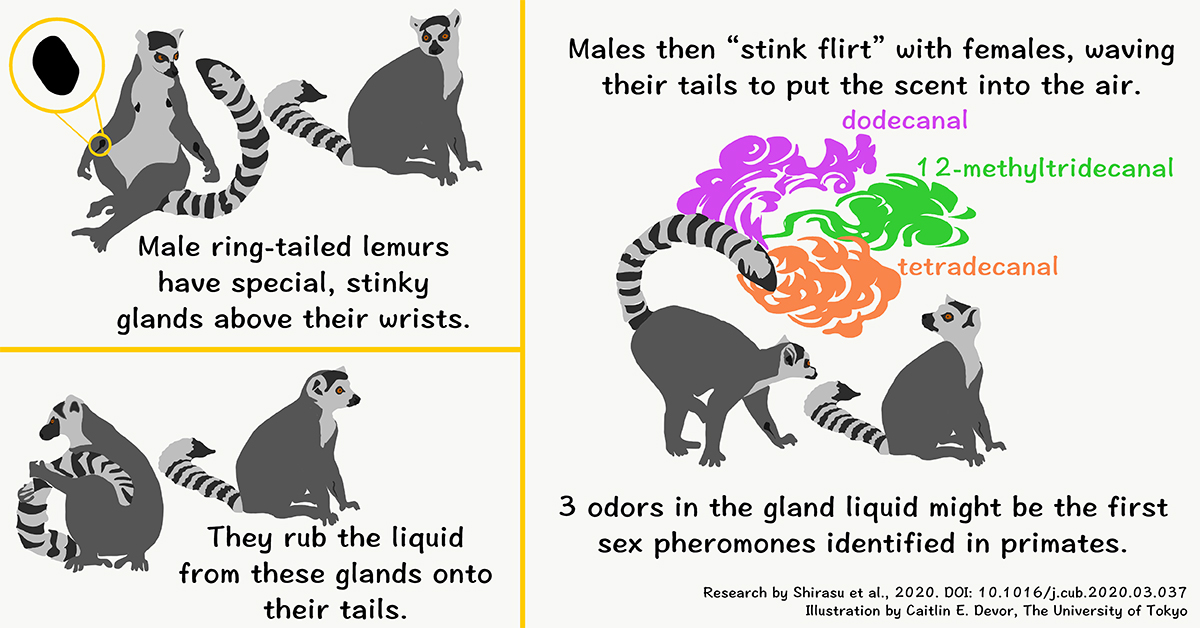 “Outside of the breeding season, females had no special interest in any of the male odors we tested,” said Shirasu.

To discover if any of the three odor compounds are more important for attracting females' attention, researchers presented females with cotton pads soaked in the individual odor compounds, a blend of the three compounds to mimic normal male breeding season wrist gland secretions, or a neutral control liquid.

When tested in their normal social environment, female lemurs showed no increased interest in any of the three individual male odor compounds. The more natural blend of the three compounds did capture their interest, measured as a longer time spent sniffing that cotton pad.

Although researchers can observe female lemurs’ interest, the outcomes of that interest are more complicated to study.

“Curiosity does not necessarily mean sexual attraction. We cannot say for certain yet if a female spending a longer time interested in the scent means that a male will be more successful at mating,” said Touhara.

Fragrance for lemurs only 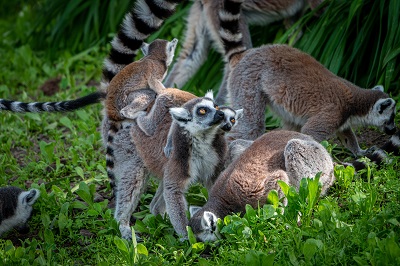 Ring-tailed lemurs live only on Madagascar, an island country in the Indian Ocean off Africa’s southeastern coast, in large social groups.
Photo by David Bruyndonckx/Unsplash

It remains impossible to predict what the three likely lemur sex pheromones might mean for other primates, including humans.

“There are no humans waving tails at each other,” said Touhara.

Lemurs are part of a different evolutionary lineage called the wet-nosed strepsirrhines, which have a greater sense of smell than the dry-nosed haplorhine group that includes humans and apes.

“Maybe there are no sex pheromones in humans, but there are probably odors - like parents smelling their baby’s heads - that we use to affect each other’s emotions,” said Touhara.

Researchers cannot yet refer to the odors identified in lemurs as official sex pheromones due to the scientific definition that a pheromone must be used for communication only between members of a single species. The research team hopes that ecologists and zoologists may be able to use these new details about likely sex pheromones to increase understanding of primate behavior.

This research project was conducted over seven years, led by the University of Tokyo in collaboration with partners at Kyoto University, the Research Institute of Evolutionary Biology and the Japan Monkey Centre.