Tastier pork comes from pigs that eat the barley left over after making the Japanese liquor shochu. A team of professional brewers and academic farmers state that nutrients in the leftover fermented barley may reduce the animals’ stress, resulting in better tasting sirloin and fillets.

“Kyushu, in Western Japan is well-known historically for making shochu and for its many pig farms. We hope collaborative research projects like ours can directly benefit the local community and global environment,” said Yasuhisa Ano, the first author of the research paper published in Food Chemistry. Ano is affiliated with the Kirin Central Research Institute at Kirin Holdings Co., Ltd.

Currently, the mash of leftovers that remains after distilling out the alcohol is considered industrial waste and is often disposed of in ways that create more climate-changing carbon dioxide. Feeding distillation leftovers to farm animals can improve the animals’ quality of life, lower farmers’ and brewers’ costs, appeal to discerning foodies, and benefit the environment by reducing food waste.

Japanese shochu can be made from barley, potatoes, rice or other starches first decomposed with mold, then fermented with yeast, and finally distilled to an alcohol content usually greater than 20 percent. Incidentally, Japanese sake is a fermented drink always made from rice with an alcohol content typically around 15 percent.

Researchers at the University of Tokyo fed six pigs a standard diet supplemented with shochu distillation remnants, the dried mixture of barley, mold and yeast left over after distilling out the shochu. Pigs fed shochu remnants from age 3 to 6 months had higher amounts of antibodies called IgA in their saliva, indicating that shochu remnants kept the pigs healthier than the standard diet. Additionally, pigs fed shochu remnants had lower stress levels than pigs fed the normal diet supplemented with fresh barley, as measured by the amount of cortisol, a common stress hormone, in their saliva.

The UTokyo research team performed additional tests in mice to study the effect of barley shochu distillation remnants on stress. Mice that ate the distillation remnants just once directly before a stressful event returned to normal behavior faster than other mice. The mice who ate the shochu remnants also had normal levels of dopamine in their brains after the stressful event, indicating a better response to stress. 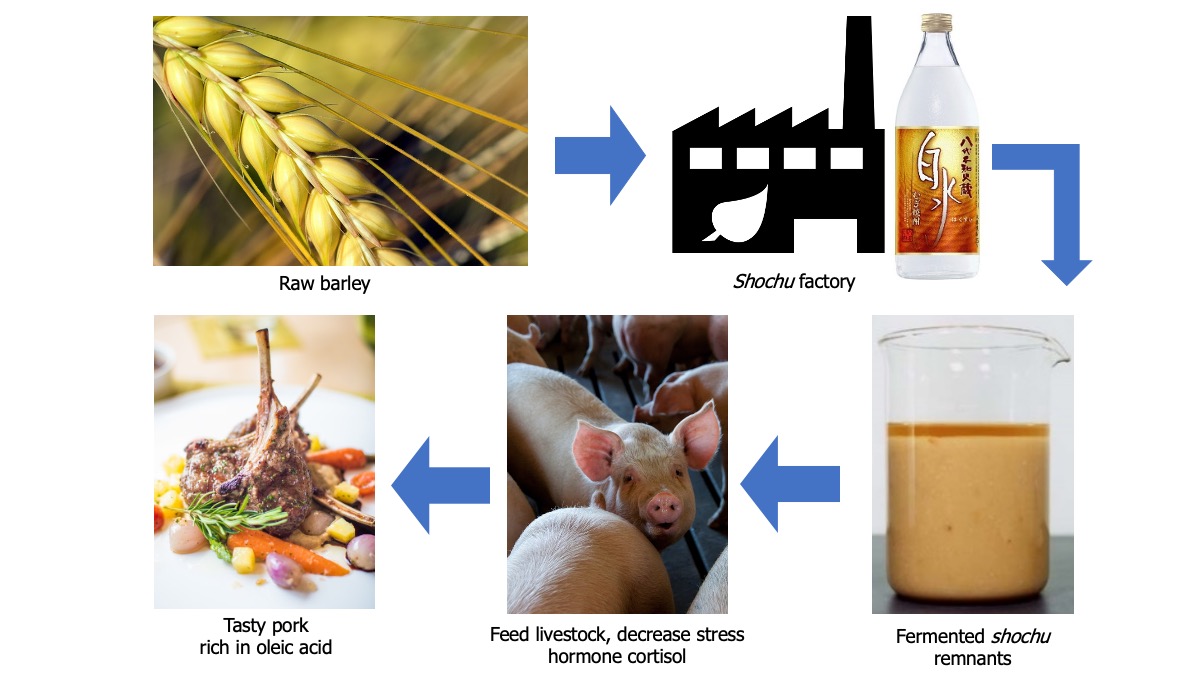 Experts in farming and brewing have stated that tastier pork comes from pigs that eat the barley left over after making the Japanese liquor shochu.  Barley image from Pixabay/Pexels; pigs image from John Lambeth/Pexels; meal image from Chevanon Photography/Pexels, CC0

Researchers suspected that the lower stress and better health throughout the pigs’ lives created higher quality meat, but they asked flavor experts from Kirin for a blind taste test.

According to the experts’ palates, both sirloin and fillet cuts of pork from the shochu remnant-fed pigs were higher quality than meat from pigs that ate the standard diet: better umami, tenderness, juiciness and flavor.

“We saw no difference in the pigs’ weight gain between the two diets and the pigs were slaughtered at the standard six months of age, meaning any difference in the quality of meat was not because of a difference in quantity of fat,” said Associate Professor Junyou Li from the University of Tokyo, a co-author of the research publication.

That higher quality taste was likely due to chemical differences in the meat. Fat from the higher-quality meat melted at lower temperatures, which creates the delicious melt-in-your-mouth texture. That fat was also made up of a higher percentage of oleic acid, an unsaturated fatty acid linked by other studies to improved levels of “healthy” LDL cholesterol.

“We hope that identifying these benefits for the animals and creating a premium tasting product for consumers will increase farmers’ motivation to try a new diet for their pigs,” said Professor Masayoshi Kuwahara, director of the University of Tokyo Animal Resource Science Center and last author of the research publication.