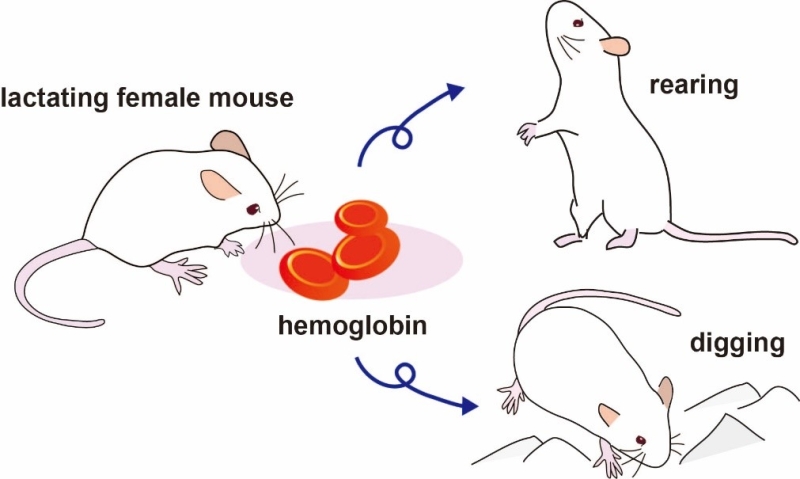 Biochemists in Japan were surprised to discover that the molecule hemoglobin in the blood works not only as an oxygen carrier, but when the blood is spilled as a result of aggression, accident or predator attack, the molecule also acts as a chemosensory signal — a chemical stimulus picked up by the senses, namely smell in this case — for lactating mother mice, prompting digging or rearing behavior in them to check the surrounding environment and keep their offspring safe.

A paper describing the researchers’ findings was published recently in the journal Nature Communications.

Back in 2005, researchers in the lab led by Kazushige Touhara at the University of Tokyo had already discovered in the tears of male mice a pheromone — a type of chemical substance secreted by animals that influences the behavior of others in the same species — named ESP1 (exocrine gland-secreting peptide 1), which is composed of protein. When investigating how sensory neurons in the vomeronasal organ (the organ responsible for detecting chemosensory signals such as pheromones) were stimulated by ESP1, they found that an unidentified molecule from the saliva glands was also mysteriously activating these neurons.

In subsequent research trying to nail down the source of this neuron activation, the researchers found that contamination of the gland by the blood was responsible. However, the specific molecule driving the activity and the neural pathways involved remains unknown.

Then the researchers first exposed male mice to a small quantity of the blood, and observed blood-dependent activation of peripheral sensory neurons located in the vomeronasal organ in the nose. They further found that this vomeronasal stimulatory activity was prompted by cell lysate (the contents of broken up blood cells), but not in plasma (the part of the blood that carries water, salts and enzymes), and so they purified the cell lysate and employed protein sequence analysis and absorption spectrum analysis to find out which molecular compounds in the lysate were inducing the neuronal activity. The results demonstrated that hemoglobin was responsible.

“Everyone, even schoolchildren, knows that hemoglobin is the oxygen-carrying molecule in the blood, so this finding of its role as a chemosensory signal in the nose came as a real surprise to us,” said Touhara, the corresponding author of the paper and professor with the University of Tokyo’s Department of Applied Biological Chemistry.

Mice in their natural environment encounter the blood under specific conditions, such as upon an injury due to aggression among males, damage by predator attack, and pup delivery. Nevertheless, when the researchers investigated the effects of hemoglobin on social behaviors such as aggression and sexual behavior, they observed no obvious change in male-male aggression, maternal aggression, or sexual behavior upon hemoglobin exposure.

Once they searched responsible brain regions for the hemoglobin signal, it was only in lactating mothers that a specific neural activation in one of the regions in the hypothalamus that received the information from vomeronasal sensory neurons. Therefore, the researchers started to look at the behaviors of lactating female mice upon exposure to hemoglobin.

“The mothers immediately showed digging or rearing behavior once they received hemoglobin after playing with a cotton swab soaked in it,” Touhara continued. “And the same behavior was observed with exposure to fresh blood.”

The researchers also found that hemoglobin in the blood stimulates vomeronasal sensory neurons through one specific receptor, Vmn2r88. Meanwhile, in mice lacking Vmn2r88, the increase of digging or rearing behavior was not observed, suggesting that this behavior is controlled by the specific ligand-receptor pair comprising hemoglobin binding to Vmn2r88.

Next, by using optogenetics to manipulate neural activities in the hypothalamus with light and genetic engineering technologies, the researchers were able to replicate the digging behavior, and from this proposed a responsible neural circuitry that regulates these hemoglobin-mediated behaviors.

Such digging and rearing represent a kind of exploratory and/or risk-assessment behavior, suggesting that the response to hemoglobin appears to be important for mothers to protect their pups by checking their external environment. This leads to the next question of why only lactating mothers show this behavioral response.

From this study, Touhara and his team found that one of the well-known molecules in the blood, hemoglobin, works as a chemosensory molecule and its receptor-circuit mechanism is responsible for a type of exploratory and/or risk-assessment behavior in lactating female mice. It shows that animals detect the signals surrounding their living environment and display appropriate response according to their life stage.