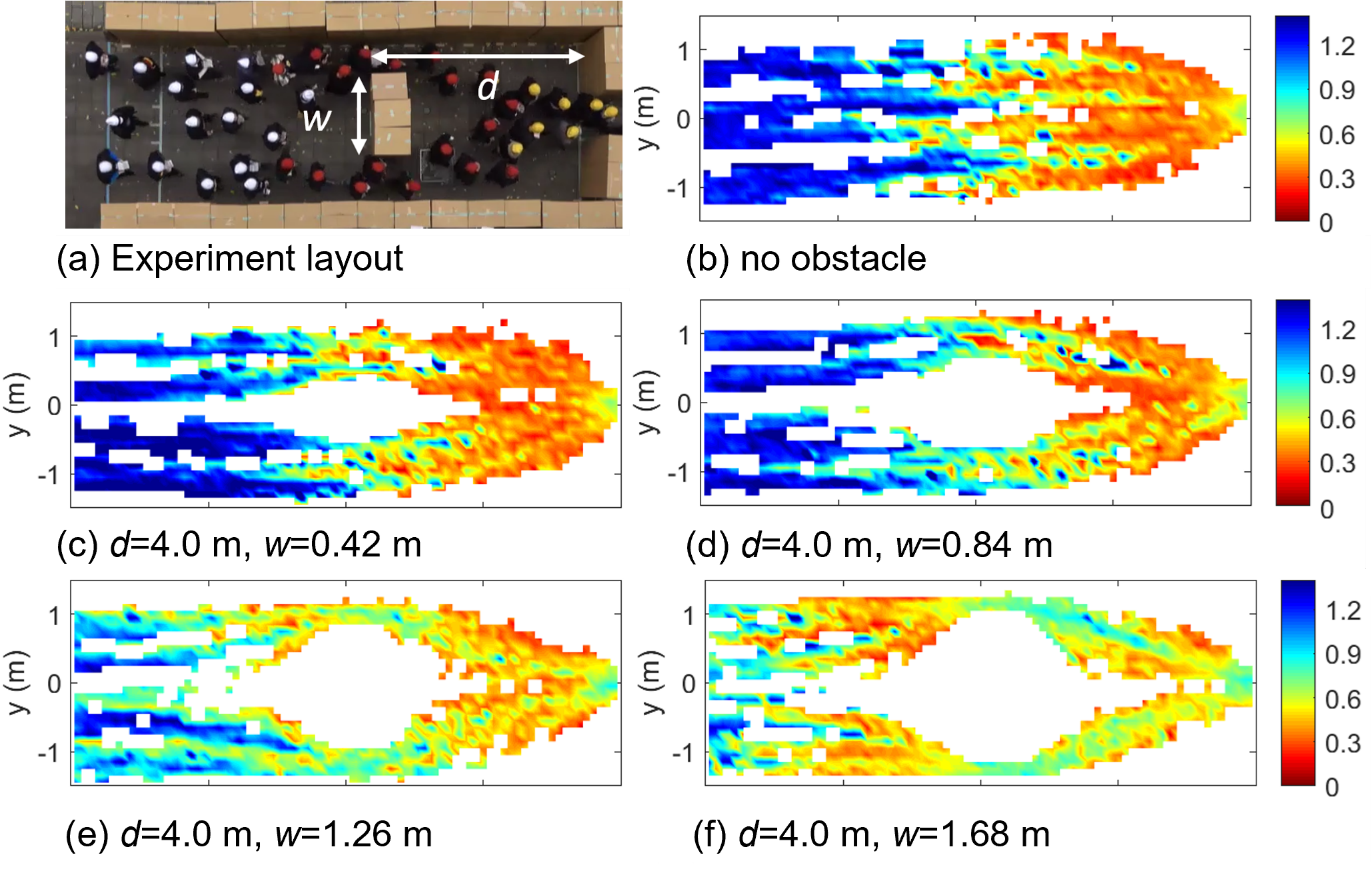 Congestion perception. It might look like something from a physics paper, but this is actually a plot showing how people’s perceptions of an enclosed space change depending on how impeded the crowd was by an obstacle. Blue colors reflect people within the crowd who were more frustrated in the space, and red colors reflect people who were more at ease. In each case, w is the width of the obstacle, and d is the distance between the obstacle and the exit. ©2022 Jia Xiaolu et al.

When designing public spaces or other places where foot traffic is considered, planners and architects need to know how people perceive the spaces in question. It is commonly believed that a space will feel more congested if the crowd density is higher. However, new research suggests that walking speed of individuals actually plays a greater role than crowd density in how someone feels about a busy space. Also, age and gender seem to affect someone’s perception of how congested an enclosed space feels to them.

If you live in a town or city, you are probably experienced in the art of navigating through crowded areas. But sometimes you can’t help but feel like your surroundings are too congested for comfort. Intuition tells us this feeling must be because of the sheer volume of people around us in these moments that causes the perception of somewhere being too congested. But Project Assistant Professor Jia Xiaolu from the Research Center for Advanced Science and Technology at the University of Tokyo wanted to verify this assumption, and ended up proving that it might not actually be the entire truth of the matter.

“Perception of congestion is an important matter for those designing spaces to be used by people, so if there’s a way to estimate this perceptual value, it would be useful to know,” said Xiaolu. “Thus, I was a little surprised to find that the density of people in a given space was not the best indicator of perceived congestion; in fact, it turned out to be the walking speed, or velocity, of the people around the perceiver.”

Local density. These are four different methods for measuring and visualizing density, in this case, the density of people within a physically constrained space. ©2022 Jia Xiaolu et al.

In order to determine this, Xiaolu and her team first had to set up an elaborate experiment. They recruited a large number of people to play the part of a crowd. The crowd was asked to walk through a relatively narrow space made out of cardboard boxes with an exit at the end and an obstacle made from boxes just before it. The researchers repeated the experiment but changed the size of the obstacle to choke the flow of the crowd, all the while recording the motions of people by using a camera and motion-tracking software.

“That the velocity of pedestrians rather than density of the crowd better indicates perceived congestion was a bit of a surprise,” said Xiaolu. “But it leads us to believe that people perceive a space too congested when they are simply unable to walk at the speed they wish to; there is a gap between their desired and actual velocity. This idea corresponds with the way people felt depending on where they were in the test space. In trials where the density was roughly uniform, slower groups around the obstacle led to those in the vicinity reporting feelings of congestion more than those prior to that section.”

The study suggests that overtaking where possible might make some people feel less constrained by the congestion, but other studies of crowd dynamics by Xiaolu and her team report that overtaking behavior can negatively impact the flow of the crowd as a whole. The team also found some noteworthy details when they analyzed the way different demographics responded to tests.

“We found that women and also older people generally felt less constrained than men and younger people, which is probably due to their lower desired velocity, thus a smaller gap between their desired and actual velocity,” said Xiaolu. “And while this is interesting, I think our future studies will focus on spaces where the objective is not so much about getting from A to B, but more goal oriented, such as interacting with a service in a store, gallery or other destination.”