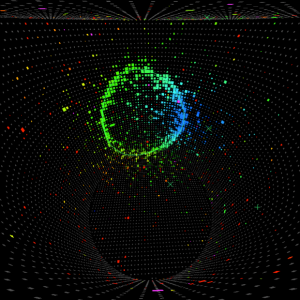 © Kamioka Observatory, ICRR (Institute for Cosmic Ray Research), The University of Tokyo and T2K collaboration,
Example of a candidate electron neutrino decay event
Three-dimensional event display of an event captured by photomulitplier tubes located on the inner wall of the cylindrical Super-Kamiokande. Tubes that captured light are shown in different colors to indicate time difference. When an electron neutrino interacts with a water molecule, it produces an electron among other particles, which in turn produces a shower of electrons and positrons. These produce Cherenkov light, which is detected in a ring shape on the wall of the Super-Kamiokande. This event is a candidate electron neutrino appearance obtained in March 2012, the first event recorded after completing repairs required after to the Great East Japan Earthquake.

Using data collected up to April 2013, T2K (Tokai-to-Kamioka long baseline neutrino oscillation experiment) observed 28 electron neutrino candidates at the Super-Kamiokande detector, more than the 4.6 events that would have been expected without the appearance of electron-type neutrinos. The probability that random fluctuations of background events alone would produce the observation is less than one in a trillion. Therefore, this result from the T2K experiment is definitive evidence for the in-flight transition of muon neutrinos into electron neutrinos.

The discovery of the electron neutrino appearance opens the possibility to explore a key mystery of the universe: why it is dominated by matter particles instead of anti-matter particles. We are now entering new era of precision measurement of the electron neutrino appearance probability toward this goal. The T2K experiment is expected to accumulate ten times more data in the near future. In addition, the technical design for Hyper-Kamiokande holding a one-million-ton water target (20 times larger than that of Super-Kamiokande) is underway.