Olfaction is essential for the survival of many animals. The ability to distinguish different odors depends on the number and type of olfactory receptors (ORs) found in an organism’s genome. The research group of Prof. Yoshihito Niimura, Dr. Atsushi Matsui, and Prof. Kazushige Touhara in the Graduate School of Agricultural and Life Sciences, the University of Tokyo, and ERATO Touhara Chemosensory Signal Project examined the OR genes encoded in 13 mammalian species’ genomes and found that African elephants have a surprisingly large number of OR genes, with approximately 2,000. This number is the largest ever characterized, and is more than twice that found in dogs, and five times more than in humans. 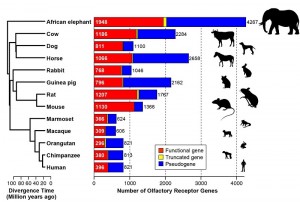 © 2014 Yoshihito Niimura.
Numbers of olfactory receptor genes in the genomes of 13 mammals. A truncated gene is a sequence that, due to incomplete genome assembly, cannot be determined to be a functional gene or a pseudogene. A phylogenetic tree of the species is also shown.

The authors invented a novel bioinformatic tool to trace the evolutionary trajectories of individual OR genes, and examined their duplication and loss in each species. Some lineages of OR genes greatly expanded in a given species, such as an ancestral gene that has duplicated in elephants, generating 84 distinct genes, while other OR gene lineages were contracted in evolution. They also discovered three unique olfactory receptor genes that are evolutionarily very stable for 100 million years without any change in gene number and with very little change in sequence. This suggests that these receptors may have physiologically important functions common to every mammal beyond the detection of odors.

Each species’ unique OR repertoire has been shaped by hundreds of gene duplications and losses during evolution to adapt to each species’ living environment. Comparison among OR gene repertoires helps us to understand the molecular basis for differences in olfaction across organisms including humans.