The MAGIC telescopes, an international joint experiment, have captured an extreme event coming from the regions immediately surrounding a supermassive black hole located in the heart of the radio galaxy IC310 located in Perseus cluster, 260 million light years from the Earth. During the extraordinary outburst of gamma rays the source showed unexpectedly rapid flux variations far more rapid than anything yet observed. 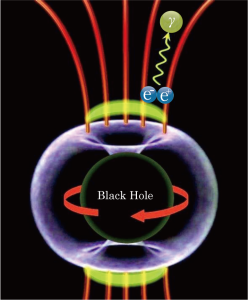 Credit: The MAGIC Collaboration
The observed rapid variation in gamma rays from radio galaxy IC310 is thought to be due to the presence around the rapidly rotating supermassive black hole of a magnetosphere with polar vacuum gap regions where the electric fields accelerate electrons and positrons to ultra-relativistic energies thereby emitting gamma rays.

The variation in the tera-electron volt high energy gamma rays turned out to be much shorter than allowed by special relativity given the size of the black hole, requiring a new model to describe the jet mechanism of black holes. The scientists hypothesize that the maximally rotating black hole is accreting plasma from the central region of the galaxy IC310. They have proposed a model in which the presence around the black hole of a magnetosphere with polar vacuum gap regions allows the electric fields accelerating particles in the gaps to ultra-relativistic energies. Interactions between accelerated particles and low-energy thermal photons from the plasma accreted by the black hole leads to the observed gamma rays.

The scientists expect that further observations of these objects in the high-energy gamma-ray region of the spectrum will enable scientists to study yet unsolved mechanisms of black holes and to probe the physics of the extreme environment in their vicinity.

MAGIC is an international collaboration, and the Japanese MAGIC Consortium includes the research groups of Professor Masahiro Teshima of the Institute for Cosmic Ray Research (ICRR) at the University of Tokyo, Associate Professor Hidetoshi Kubo of Kyoto University, and scientists from Tokai University, Tokushima University, and the High Energy Accelerator Research Organization (KEK).