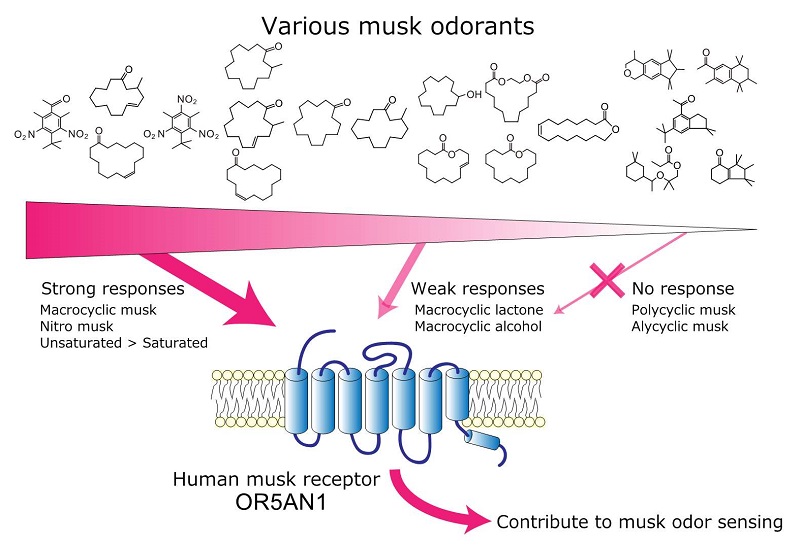 Specificity of the human muscone receptor OR5AN1 to musks
The human muscone receptor OR5AN1 responds strongly not only to macrocyclic musks, but also to nitro musks that have completely different chemical structures from muscone. Conversely, OR5AN1 exhibits only a weak response to lactone with the same macrocyclic structure, while responding strongly to macrocyclic ketone which has a double bond in the macrocyclic ring structure. These results suggest that the specificity of OR5AN1 is extremely important in our perception of musk odors.
© 2016 Kazushige Touhara.

University of Tokyo researchers identified the olfactory receptors for musk odors in a range of mammals, and examined how the protein responds to musk odors, which are widely used in perfumes. The group revealed that a single olfactory receptor protein affects perception of musk odor in mice and humans.

Musk odors have been used widely in perfumes from ancient times because of their fascinating scent. However, recently the cosmetic industry is facing difficulty in obtaining natural musks such as muscone, a rare compound. While there are many chemical compounds that mimic the aroma of muscone, their chemical structures differ considerably and it is not known why they smell the same to us.

The research group of Professor Kazushige Touhara and Project Assistant Professor Mika Shirasu in the University of Tokyo Graduate School of Agricultural and Life Sciences recently identified new olfactory receptor (OR) proteins that are sensitive to muscone in four species of primates. The group had identified one muscone OR each in mice and humans in prior research, so this time they investigated the mechanism by which all of these ORs detected musk odors. In particular, the response of the human muscone receptor OR5AN1 to a variety of musk scents closely reflects human perception of musk odors as strong or weak and the quality of the odor. To put it another way, odorants that activate OR5AN1 tend to have musk odor. Moreover, in case of mice, genetic deletion of the most sensitive musk receptor, MOR215-1, resulted in drastic reduction of sensitivity to muscone, suggesting that MOR215-1 plays a critical role in muscone perception.

“In this study, we clarified the sensing mechanism for musk odors,” says Shirasu. She continues, “We hope that the strategy established for screening compounds that activate the human muscone OR will facilitate the development of novel and commercially useful musk odors.”