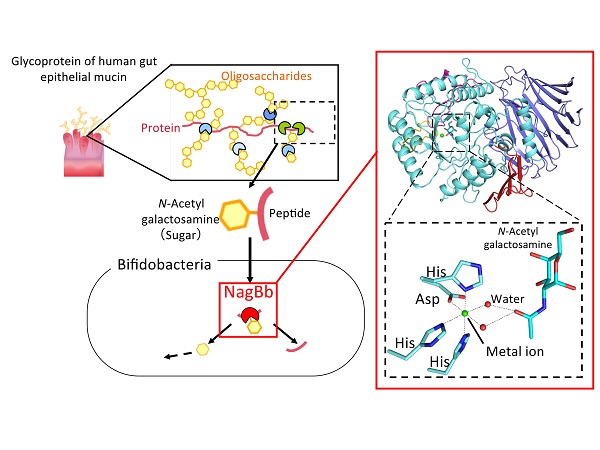 Utilization of mucin by bifidobacteria; overall structure, active site architecture of NagBb enzyme
At left, bifidobacteria secrete several enzymes to break down sugar molecules and proteins for absorption into the cell. The α-N-acetylgalactosaminidase (NagBb) enzyme breaks down imported fragments into sugars and proteins; at right, the metal ion (green sphere) in the active site is involved in the recognition of the sugar substrate N-acetylgalactosamine.
© 2017 Shinya Fushinobu.

A University of Tokyo research group and their collaborators have revealed the three-dimensional structure and function of an enzyme that helps a group of bacteria in our gut, known as bifidobacteria, colonize and propagate by breaking down sugar chains. The current research holds promise of paving the way for the development of prebiotics that promote the growth of bifidobacteria while benefiting their host.

Bifidobacteria is a microbe, which is attracting a lot of public interest lately for its beneficial effects on human health. The bacteria draws benefit from our body without causing it harm, possessing several unique metabolic systems to survive in our gut, including utilizing the sugar chains of mucin—a glycoprotein in the intestinal mucous membrane’s epithelium—as an energy source for growth and development.

The research group led by Professor Shinya Fushinobu, Assistant Professor Takatoshi Arakawa, and graduate student Mayo Sato of the Graduate School of Agricultural and Life Sciences at the University of Tokyo focused on α-N-acetylgalactosaminidase (NagBb), an enzyme that plays a key role in bifidobacteria’s utilization of the mucin sugar chains. Bifidobacteria secrete various enzymes to break down mucin sugar chains and proteins, and absorbing the fragments, which are linkages of N-acetylgalactosamine sugars and peptides; NagBb is responsible for splitting the fragments into simple sugars and peptides. The researchers, who used X-ray crystallography to reveal the three-dimensional structure of the enzyme for the first time, discovered some parts of its overall structure and active center architecture were similar to those found in another bifidobacterial enzyme. However, they revealed that the active site in NagBb that recognizes the sugar substrate N-acetylgalactosamine has a metal ion playing a key role in enzymatic activity—thus far, such an N-acetyl sugar-recognition mechanism with a metal ion has not been observed in other similar types of enzymes.

The current study, by determining the detailed molecular structure of the NagBb enzyme, provides further insight into the process by which bifidobacteria utilize sugar chains in our gut to colonize and increase their numbers.

"Bifidobacteria may have obtained this sort of unique enzyme through molecular evolution arising from the process of symbiosis with humans," says Fushinobu. He continues, "We expect this achievement will lead to the development of a new kind of prebiotics."

Department of Biotechnology, Graduate School of Agricultural and Life Sciences

Laboratory of Enzymology, Department of Biotechnology, Graduate School of Agricultural and Life Sciences