UTokyoNY Event by ICRR “Exploring the Universe with Multi-Messengers” held

Tweet
UTokyo's Institute for Cosmic Ray Research (ICRR) held a special online symposium titled “Exploring the Universe with Multi-Messengers” on February 12, 2022 (EDT), in which researchers from Japan (ICRR) and other research institutes and universities in the USA got together to make presentations on their cutting-edge research topics to the general public. The symposium was held on the Zoom conference platform with live streaming on YouTube and watched by more than 300 people including YouTube viewers in two weeks after the event. We are so grateful for your attention. 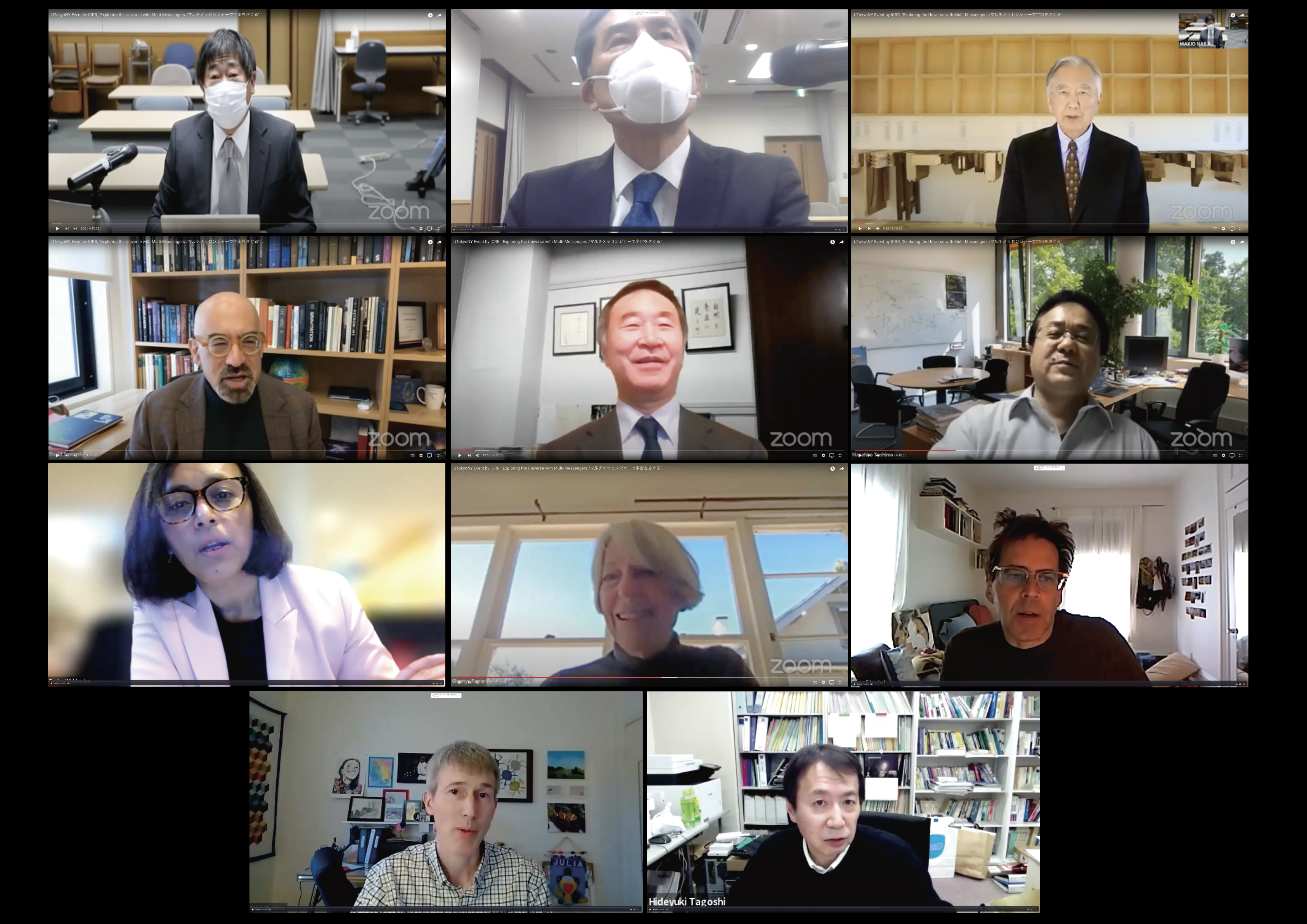 This event was the first symposium organized by ICRR to connect people living in Japan, the USA and the other areas in the world, commemorating the University of Tokyo New York Office (UTokyoNY) after its full renovation. As one of the UTokyoNY events, ICRR was very happy to be supported by the External Relations Promotion Group, UTokyo and UTokyoNY. Initially, the event was planned to be held at a real venue in New York with an online option, but it was decided that it would be held completely online from midnight in Japan due to the COVID-19 situation.

ICRR explores the frontier of the cosmic ray physics, astrophysics and elementary particle physics based on the coordinated observation and interpretation of "multi-messenger" signals such as cosmic rays, gamma rays, neutrinos, gravitational waves, and dark matter. At the symposium, Professor Masato Takita acted as a moderator and researchers from ICRR and other research institutes and universities in the USA made presentations on their research topics.

At the beginning, Professor Hiroyuki Sagawa, a chairperson of the event, said “Let me tell you the number of registrants of researchers and general public exceeds 300. I thank all of you for having interest in this symposium. I hope you will enjoy the symposium.” After that, Masaharu Masuyama, UTokyoNY president, introduced UTokyoNY, and David N. Spergel, president of Simons Foundation, made some comments as a guest speaker.

Professor Takaaki Kajita, director of ICRR, made the keynote presentation on “Multi-Messenger Astronomy and ICRR.” After he mentioned the merger of two neutron stars which was observed in 2017 by not only gravitational waves but also optic telescopes all over the world, from which was induced a lot of data including the imaginary scene of nucleosynthesis, he reviewed five research fields in ICRR, saying as his conclusion “Very exciting multi-messenger astronomy is starting. ICRR would like to contribute to the multi-messenger astronomy.”

During the symposium, four research fields: Cherenkov Telescope Array (CTA), Telescope Array (TA), Tibet/ALPACA Experiment, gravitational wave observation at LIGO and KAGRA were featured. Researchers from ICRR and the USA in turns made presentations on their latest topics and answered questions from the audience (Zoom chat and Sli.do).

The program and details can be found at the following website:
https://www.icrr.u-tokyo.ac.jp/en/event/11187/

YouTube archive video of the event has been made public from March 1, 2022. Watch the event below: