Japan and Australia: opportunities in hydrogen and low-carbon steel 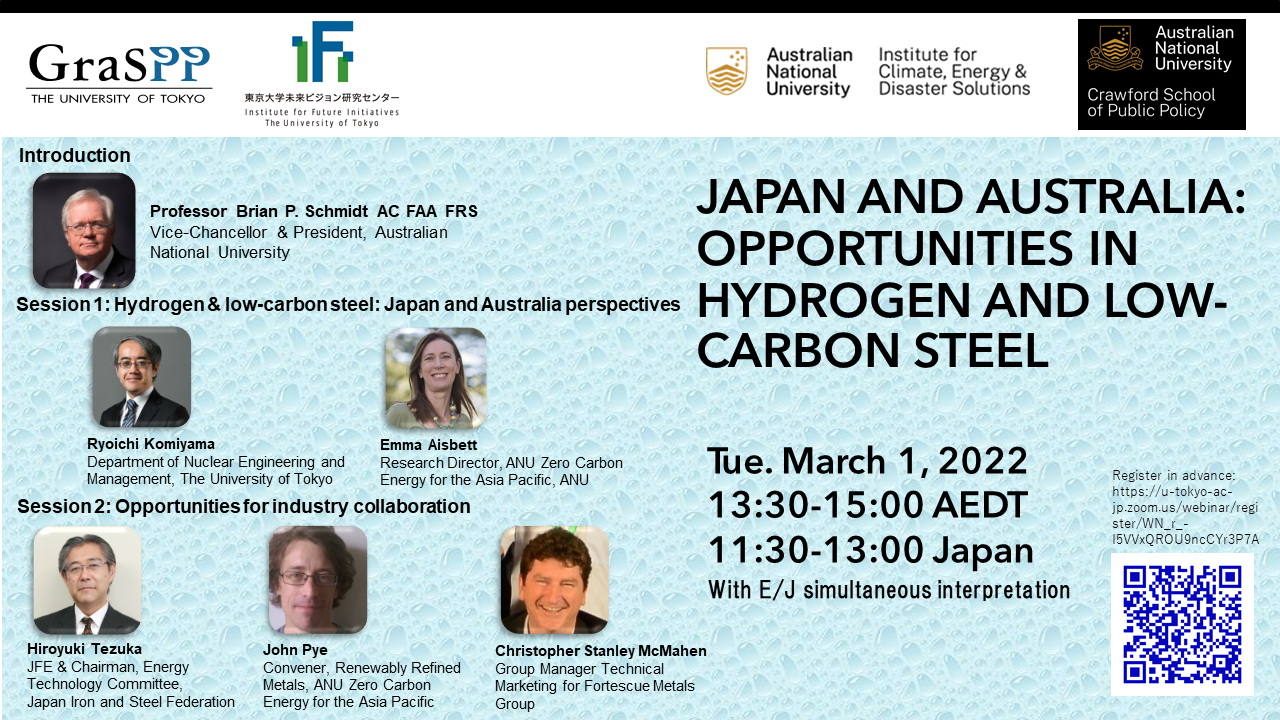 Overview
Steel is a critically important structural material in the global economy. Steel-related emissions must also fall rapidly to meet global climate goals. Japan and Australia have a historical and important partnership in trade and investment in the steel industry. Australia is the world largest producer and exporter of iron ore, and producer of 19% of the world’s metallurgical coal, while Japan is the third largest producer of steel globally. The seminar offers industry and research perspectives from Japan and Australia on opportunities for collaboration in hydrogen and low-carbon steel.

Speakers’ Profile
Introduction
Professor Brian P. Schmidt AC FAA FRS
Vice-Chancellor & President, Australian National University
Professor Schmidt is one of Australia’s most eminent scientists. Winner of the 2011 Nobel Prize in Physics, alongside many other academic awards and distinctions,  Professor Schmidt spent most of his academic career as an astrophysicist at the ANU Mount Stromlo Observatory and Research School of Astronomy and Astrophysics before becoming Vice-Chancellor.

Emma Aisbett
Emma Aisbett is a Fellow at the School of Regulation and Global Governance (RegNet) and Associate Director, Research for ANU Grand Challenge – Zero Carbon Energy for the Asia Pacific. As a researcher, Emma contributes to the Zero-Carbon Energy Grand Challenge focused on trade and investment aspects of the energy transition, and their interaction with Green Industrial Policy. She holds a Bachelor of Engineering (Chemical), a Masters of Science (Env.Mgmt.), and a PhD (Economics), the latter from the University of California (Berkeley).

John Pye
Associate Professor
John Pye is Convener of the Renewably Refined Metals program in the Australian National University’s Grand Challenge: Zero Carbon Energy for the Asia Pacific. John is also engaged in the Heavy Industry Low Carbon Transition Cooperative Research Center, Australia’s leading collaboration transforming heavy industry for the low-carbon economy, where he focuses on opportunities for hydrogen ironmaking in Australia. John holds a Bachelor of Engineering and Bachelor of Science from the University of Melbourne, and a PhD in solar thermal energy from the University of New South Wales.