What determines preference for sex pheromones of the same species? Is it merely the specificity of the pheromone receptor in the olfactory organ, the antennae, or some other factor? Researchers at the University of Tokyo have answered this question for one species, the silkmoth Bombyx mori. 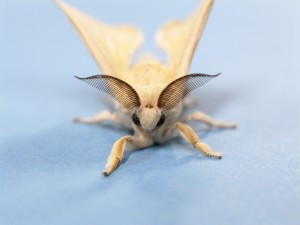 It was known that receptor proteins on the surface of pheromone sensitive olfactory receptor neurons (ORNs) in the antennae of male moths respond selectively to sex pheromones from females of the same species. However, it remained to be proven that sex pheromone receptor specificity was the cause of behavioral preference.

Professor Kanzaki’s team at the Research Center for Advanced Science and Technology (RCAST) has shown that mate preference in male silkmoths is determined by the pheromone receptor.

The researchers genetically engineered the silkmoth to express a pheromone receptor of the diamondback moth Plutella xylostella on its pheromone sensitive ORNs. The transgenic silkmoth showed full sexual behavior in response to the diamondback pheromone, locating and attempting to mate with paper impregnated with the pheromone. This showed that the programmed sexual behavior of the silkmoth was triggered by the activation of pheromone sensitive ORNs, and that preference was determined solely by the odorant receptors expressed in the ORNs.

This research helps scientists understand the ways in which mate preference is determined and how olfactory senses work. It has also been proposed that co-evolution of the preference in males and pheromones from females could be a driving force for speciation (the creation of a new species) in moths. The identification of gene that determines the preference could help give a deeper understanding of the mechanisms of pheromone mediated speciation. Additionally, because male silkmoths show conspicuous orientation behavior and have extremely high behavioral sensitivity, manipulation of the sex pheromone receptor neurons can turn silkmoths into detectors for essentially any odor for which a specific receptor can be made.

This work was carried out in collaboration with the National Institute of Agrobiological Sciences, Fukuoka University and Keio University.