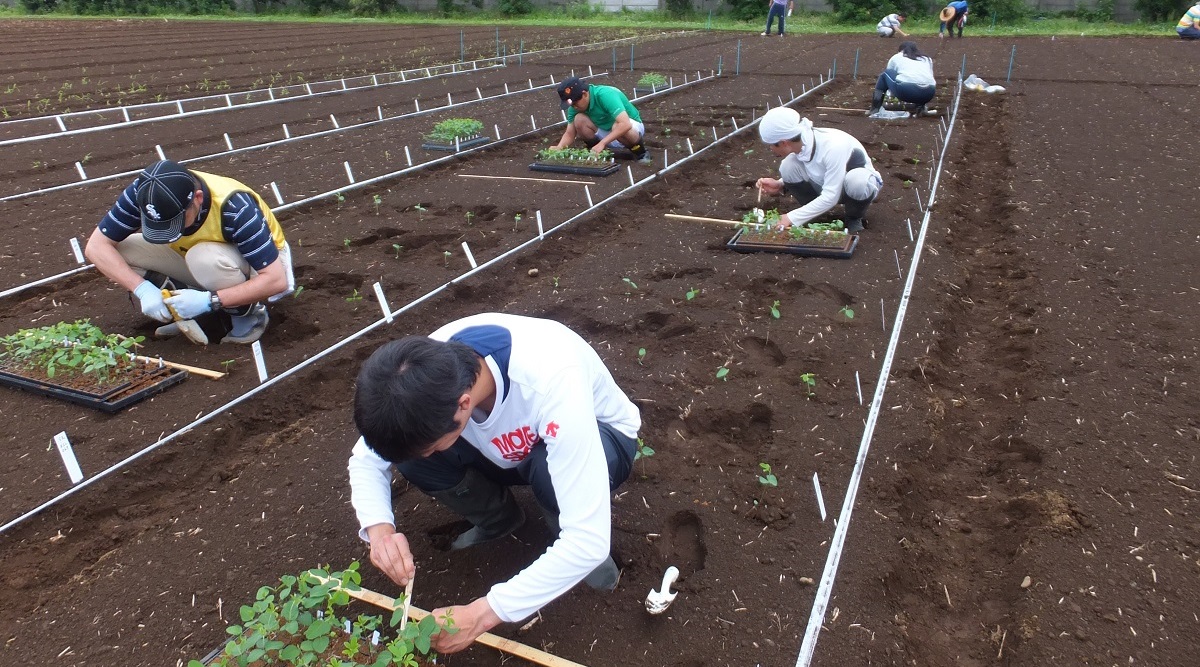 At the University of Tokyo’s farm in the city of Tanashi in western Tokyo, crop plants from Fukushima are examined and the findings are then tested in Fukushima or applied to additional research.

Fukushima Prefecture’s agriculture, forestry and fisheries industries suffered major damage during the Great East Japan Earthquake and the subsequent nuclear power plant accident. Ten days or so after the accident, faculty from the Graduate School of Agricultural and Life Sciences went to visit the disaster area to measure radiation levels at rice paddies, fields, farms and forests at their own expense, and have tried since then to find ways to produce crops that are considered safe for consumption. By April 2011, the number of faculty who had signed up for the Fukushima agricultural recovery project reached more than 50.

Project Associate Professor Naoto Nihei said, “Initially, we could not collect enough data on the state of pollution, and we were at a loss. Eventually, we found that most of the cesium that fell to the ground and entered the soil had stopped at around 5 centimeters below the surface and that Fukushima’s earth is highly adsorbent of radioactive material. The latest findings were regularly shared with local farmers and government.” Nihei had until then been researching plants using radiation isotopes at the Fukushima Agricultural Technology Center, and the disaster led him to move to the University of Tokyo to study the reduction of radioactive absorption by agricultural crops and aid in Fukushima’s agricultural recovery.

Since 2011, the school has held 14 regular briefing sessions to share the research findings with the public. While the level of radioactive cesium in rice, soybeans, vegetables and other agricultural products — aside from edible wild plants and some other crops harvested in the forest — has been below the standard set at 100 becquerels per kilogram deemed safe for consumption, Nihei says that the current effort should stay in place for a while to come. “Just as data from the Chernobyl nuclear incident in 1986 proved useful to study the impact of radiation in Fukushima, recording what happens in this area for the long term may also help lead to new technology. It’s not impossible to turn this challenge into an opportunity,” said Nihei, making clear his resolve.