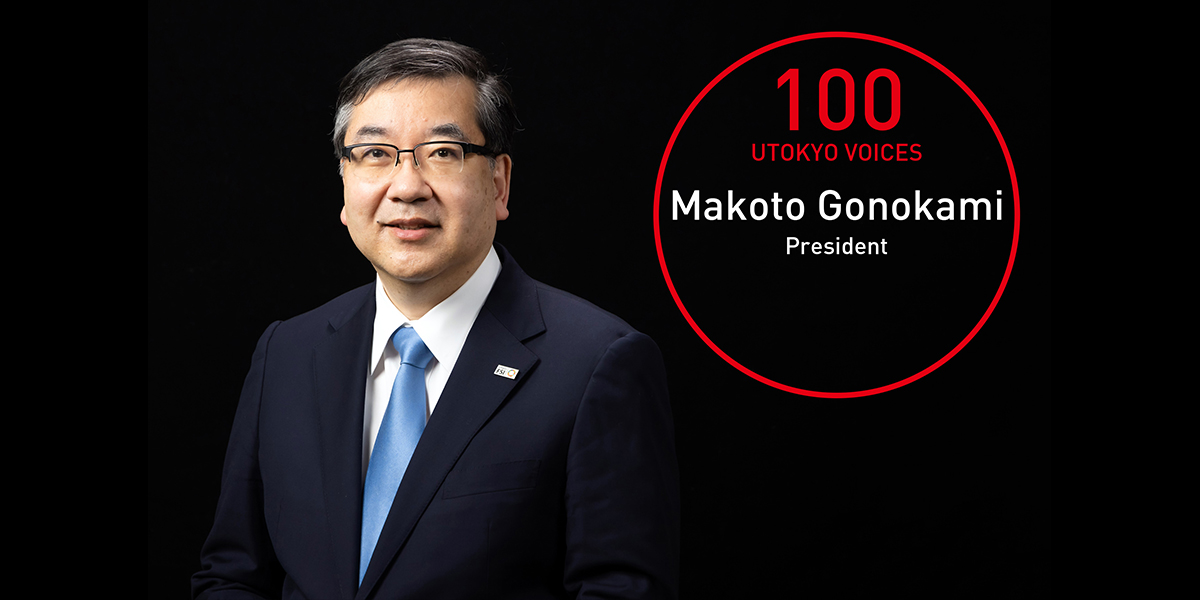 President Makoto Gonokami is one of those people who once they’ve set their mind to pursuing an interest become totally engrossed in it: As a child, he loved making things with clay or oil painting at the studio of a sculptor who lived in his neighborhood; in the third and fourth grades of elementary school, he got hooked on fishing and regularly visited Tama River in the western outskirts of Tokyo; in junior and senior high school, all he could think about was amateur radio; and when he entered the University of Tokyo, he joined a classic guitar club.

As a third-year UTokyo student, Gonokami joined a student group attempting to reproduce the world’s first particle accelerator, a cyclotron, for the university’s May Festival, spending nights to work on the project at the Institute of Medical Science on UTokyo’s Shirokane Campus. For the school festival the following year, he set out to build a laser transmitter, and experienced the thrill of running physics experiments.

Gonokami went on to enter the Department of Physics in the Faculty of Science, but felt unsure of the exact path he should take, hoping to eventually engage in work that would benefit society. He found pure science, like the theory of elementary particles, fascinating, but wondered whether going straight on to the Graduate School of Science from undergraduate studies at the Faculty of Science was sensible.

So, he sought advice from Professor Yasutada Uemura, an authority on semiconductor physics theory — and several decades his senior of a boys high school in Tokyo — who reassured him, saying: “You have nothing to be concerned about; any new research field will ultimately end up benefiting society.” Certainly, the transistor and laser, which have transformed our lives, came about from basic research in physics, and so Gonokami set forth into the realm of physics.

His efforts during the first year of his master’s course brought about immediate results in what Gonokami attributes to beginner’s luck. He established his own research lab when he was just 31 years old, a beginner researcher with a promising future.

“The laboratory room I inherited was in such poor condition and a complete mess, I even found a 2-year-old yakisoba-pan (hot dog bun filled with Japanese-style pan-fried noodles) in the refrigerator that was left behind. I spent all the startup funding I received to set up the lab just on fixing up the floor and walls,” recalls Gonokami with a laugh.

He had almost no funds to purchase lab equipment, but he was used to being frugal from his days as a research associate. When other laboratories were discarding equipment, Gonokami and his lab members would rush over to grab the equipment, which they would repurpose for use in their lab, often making their way to Akihabara, Tokyo’s electronics district, to purchase additional parts. Gonokami’s approach was not unlike that of his student days when he would built things himself for the school festival.

One research topic that Gonokami has continued to focus on is proving the existence of the Bose-Einstein condensation (BEC) — a formation of an extreme state of matter — of excitons, electron-hole pairs bound to each other by electrical attraction. No one has observed this phenomenon, even decades after it was first predicted, resulting in a leading research team in the U.S. to declare in 2000 that the BEC of excitons did not exist — a conclusion that prompted many researchers to give up their efforts.

Successfully observing the BEC of excitons is extremely difficult — but did that mean it does not really exist? Could there be something that has not yet been perceived? The latter possibility had not escaped Gonokami, and there was no reason not to investigate.

If no suitable method of observation had been developed yet, then Gonokami’s typical approach would be to create one; he would go on to spend the next 20 years devising a method that satisfied the conditions to observe the BEC of excitons.

“Progress with my research has taken longer than I had expected, having spent the last six years fulfilling my duties as university president,” he says. “Yet, now I’m finally starting to see light at the end of the tunnel,” he adds with a smile.

As president, Gonokami got to know researchers in fields across the humanities and sciences, as well as industry and government officials, and engaged in discussions on a variety of topics with them. He says this interaction broadened his perspective on the entire breadth of academic research: “I have a far clearer view than before of the issues we should be addressing as part of our research efforts,” he says.

The world is undergoing tremendous change, and the knowledge available to us today is inadequate to tackle climate change or resolve our energy problems. This means the knowledge that will be required a few decades from now does not exist yet.

In that case, we should create things if they don’t exist through a combination of science, which seeks a fundamental understanding of how things work, and the knowledge gained from the work of people in other fields or industries. The underlying approach to meaningful work that serves society, as envisioned by Gonokami, is to reach beyond a single discipline and cooperate with others in diverse fields; that is, it aligns with the “knowledge collaboration” embodied in the vision of the university he leads. 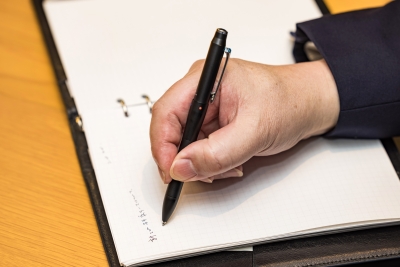 Pen
The ballpoint pen that President Makoto Gonokami keeps in his chest pocket writes smoothly and is the right weight for him. “Pens have a great impact on work efficiency,” he says. “I tried out a lot of ballpoint pens from Japan and overseas before finding this one about three years ago.” 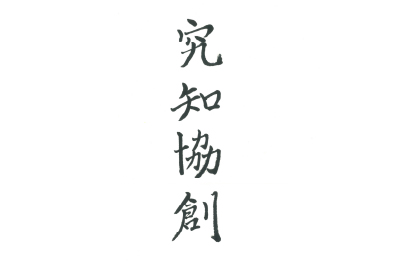 [Text: Kyuchi kyoso (“Utmost knowledge collaboration”)]
“This is a phrase I coined, expressing my hope to create a better society for all by deepening wisdom and cooperating with diverse people to spread that wisdom,” Gonokami says. “Although there is an alternative way to write the word kyoso in kanji characters, I prefer this combination using the kanji meaning people working together (協), represented by tripling the character for strength or ability (力) within it.” 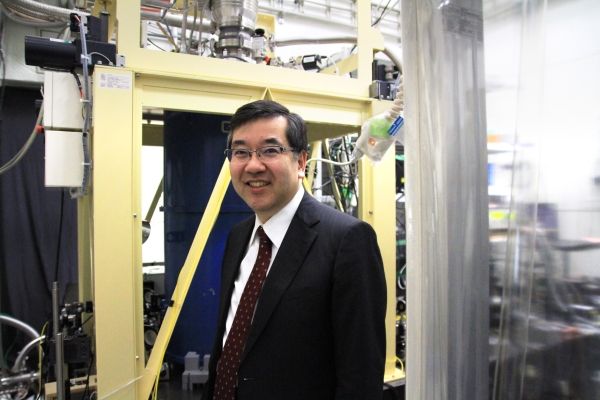