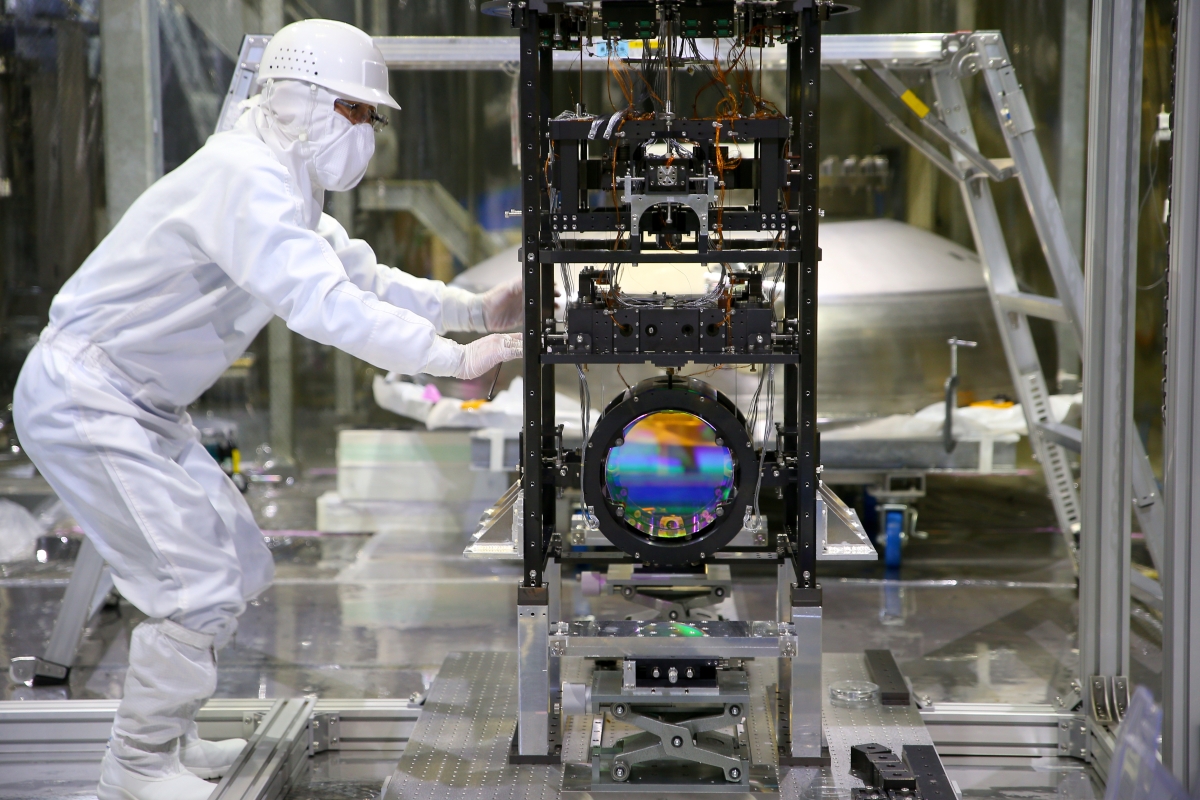 Our car pulls up in front of a tunnel off a riverside road, deep in the mountains of Kamioka, Gifu Prefecture. Flakes of snow are falling from the sky on this cold late-January afternoon in central Japan. The area is rural and quiet, and the concrete tunnel ahead looks like any other around the country.

Except that this one leads to a giant underground telescope that could help rewrite the history of astronomy.

That telescope, called KAGRA (derived from KAmioka and GRAvitational wave), has been built by research organizations led by the University of Tokyo’s Institute for Cosmic Ray Research (ICRR). Its aim is to detect gravitational waves, ripples in the fabric of space and time generated by major events in the universe, such as explosions of stars and mergers of black holes. Scientists involved in KAGRA, whose construction began in 2010, are now busy putting final touches to the observation system, which could go online as early as the end of this year.

German-born theoretical physicist Albert Einstein predicted the existence of gravitational waves over a century ago, but it was only in 2015 when the twin detectors of the Laser Interferometer Gravitational-Wave Observatory (LIGO) in the U.S. observed them directly for the first time. The participation of KAGRA in gravitational-wave observation as the fourth advanced detector in the world — following the two-detector LIGO, and Virgo, based in Italy at the European Gravitational Observatory — is expected to significantly advance astronomy and deepen our understanding of the origin and nature of the universe.

“Humankind has observed space through various kinds of light, ranging from X-rays, infrared rays to ultraviolet rays and electromagnetic rays,” said Shinji Miyoki, associate professor of physics at ICRR who has studied gravitational waves for over two decades along with UTokyo Professor Masatake Ohashi, who is in charge of the KAGRA observatory.

“Gravitational waves are completely different from all these forms of light. They are generated through vibration of things that create gravity, which warps time and space. By using gravitational waves, we could open up a whole new way of viewing our universe.” 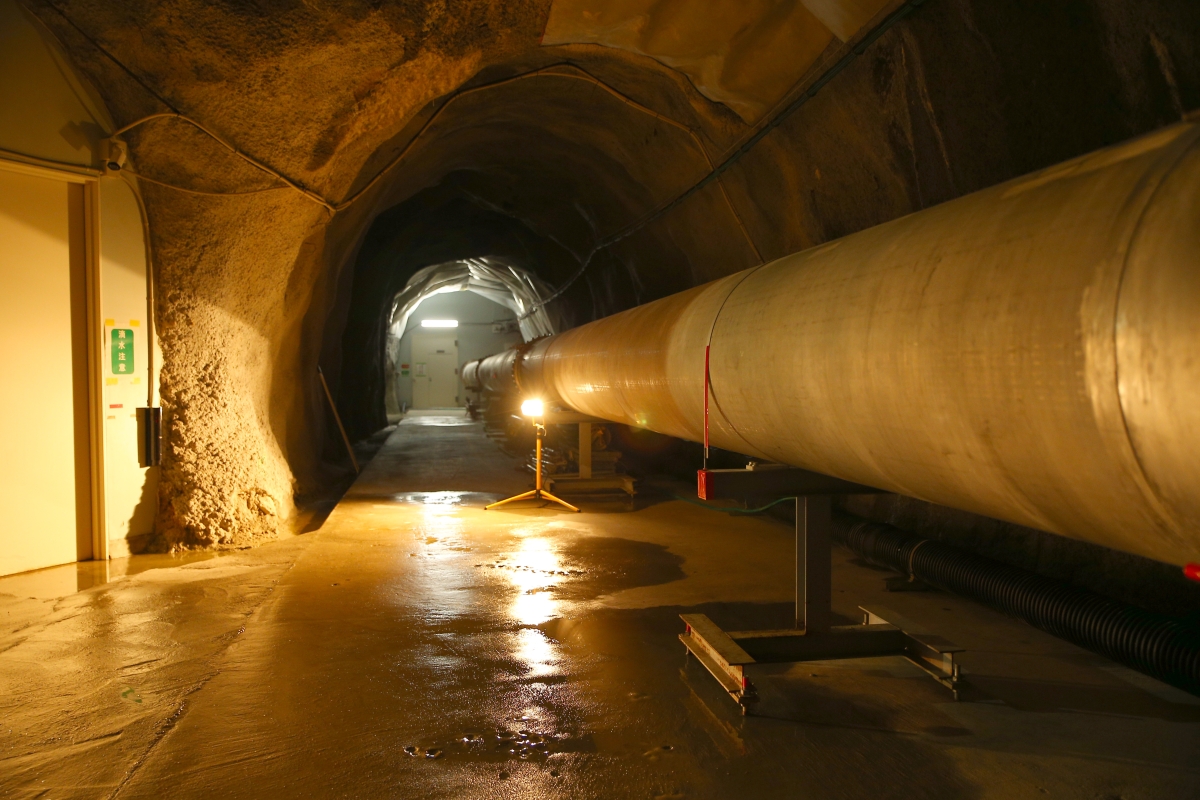 One of the perpendicular tubes running through a tunnel at the KAGRA site, set up inside a mountain in the town of Kamioka, Gifu Prefecture. A laser beam will be sent through high-vacuum stainless steel tubes to catch the signals of gravitational waves.

How to detect gravitational waves

Like other gravitational-wave observatories, KAGRA uses a device called an interferometer, which measures changes in the interference patterns of laser beams caused by gravitational waves. First, a laser beam is transmitted through a long tube and split by a mirror. The split beams travel along a pair of perpendicular tubes with exactly the same length, measuring 3 kilometers each. The two beams bounce off mirrors placed at the end of the tubes and return, joining at the beam-splitting mirror. In the absence of gravitational waves, when the beams recombine, peaks and valleys of the light waves match and cancel each other out, and no light gets detected.

But when gravitational waves reach the Earth and distort space, albeit subtly, the distance the light travels between mirrors changes, with the distance in one arm stretching and the one in the other arm squeezing. Then, when the returning beams get recombined at the base, the peaks and the valleys of the light waves no longer cancel each other out, and the recombined beam becomes brighter and some light reaches the photodetector. This is how researchers can tell gravitational waves have passed.

Gravitational waves are caused by such astronomical events as explosions of stars called supernovas, black hole mergers and mergers of neutron stars, but the chances of such events happening in one galaxy are very low. To catch astronomical events more frequently, scientists need to go after extremely weak gravitational waves that are generated far, far away from the Earth. To achieve that, the detectors need to have superhigh sensitivity. 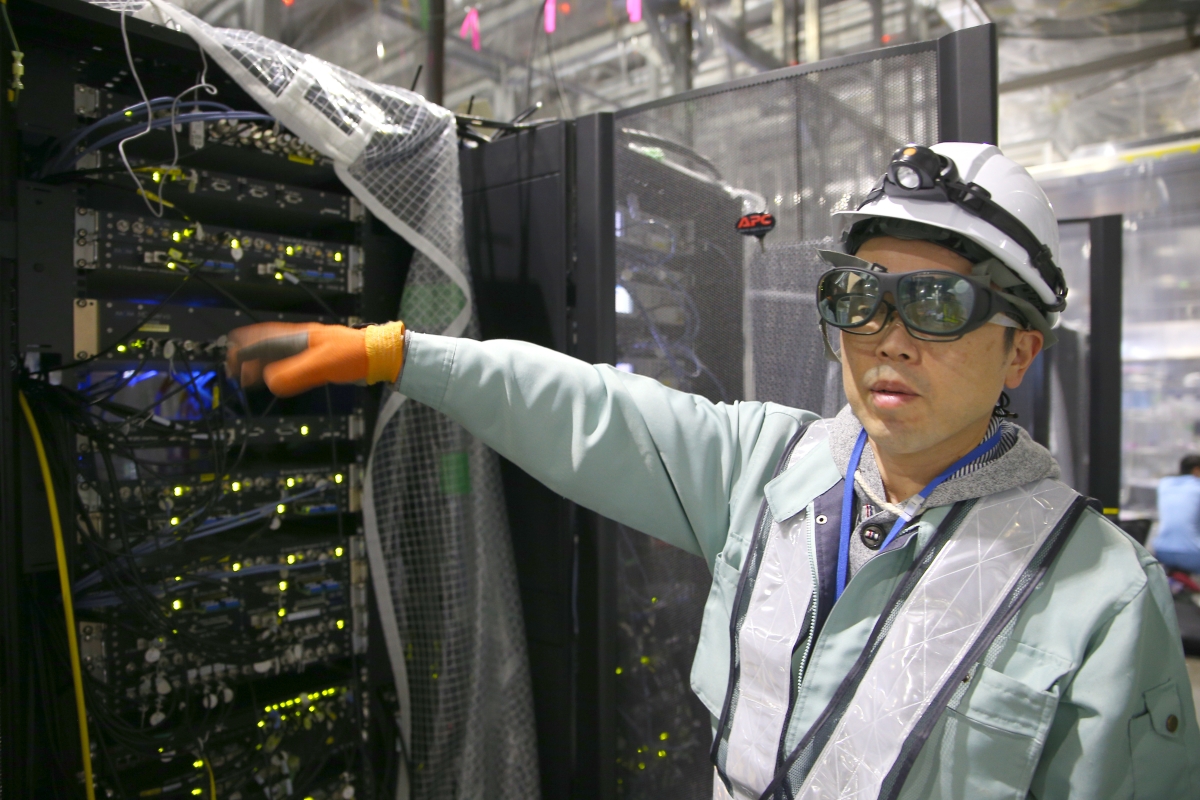 Physicist Shinji Miyoki points to a computer system that controls a myriad of precision devices at the KAGRA site. 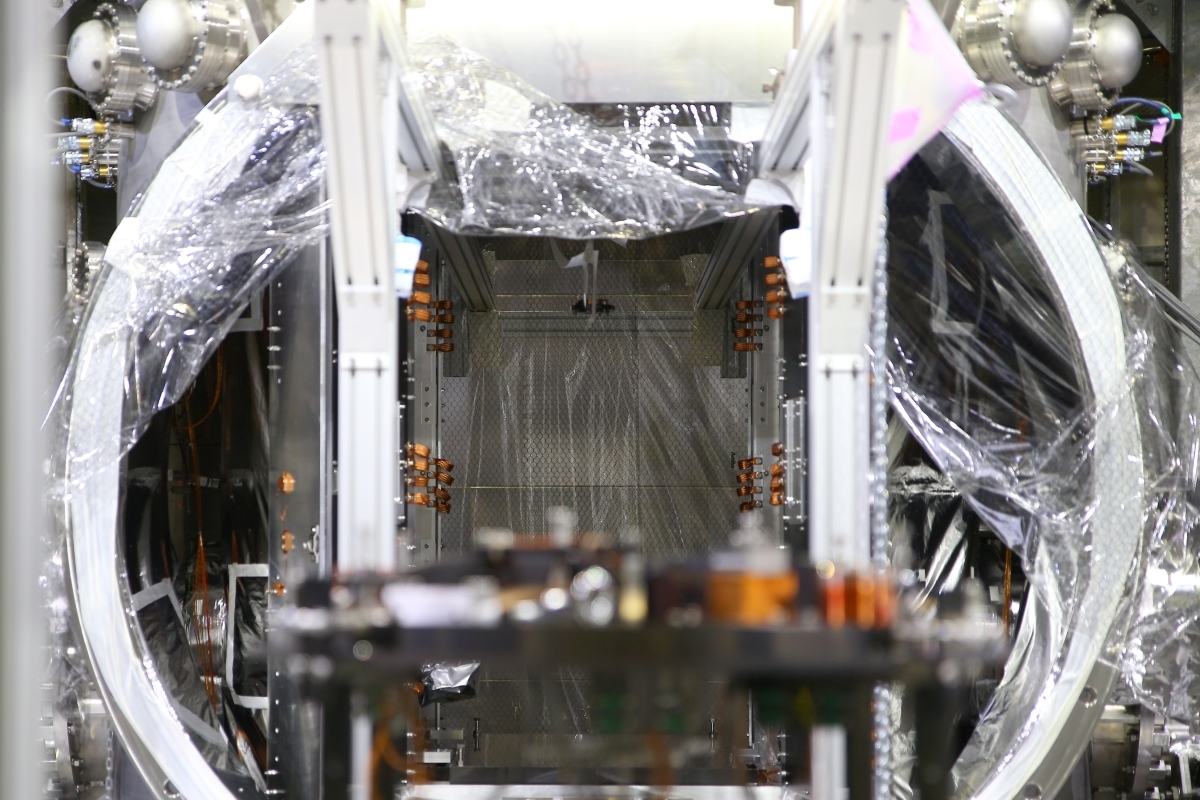 The side of a cryostat, a container where a cryogenic mirror will be installed. 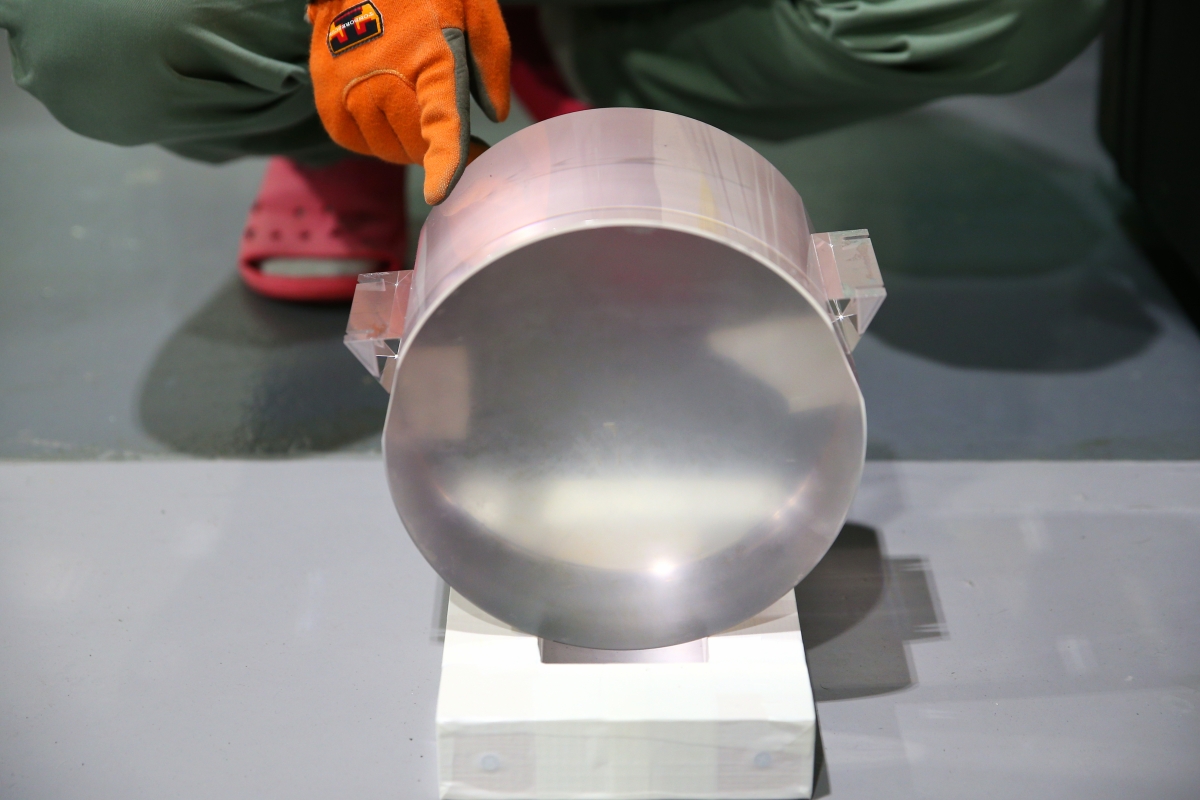 A prototype of a mirror made of single-crystal sapphire. The surface of the mirrors being installed at the observatory has been polished to be extremely smooth, to remove even a bump of 0.1 nanometers.

KAGRA has two distinct features that set it apart from other detectors: It’s underground, and its mirrors are supercold.

The observatory is located 200 to 500 meters underground from the base of Mount Ikenoyama, which used to house the zinc- and silver-producing Kamioka Mine.

Also inside the same mountain is Super-Kamiokande, a neutrino detector located 1,000 meters underground from the mountaintop. It is through experiments at Super-K that researchers led by ICRR Director and Physics Professor Takaaki Kajita discovered that neutrinos – a type of elementary particle – have mass, a discovery that won him the Nobel Prize in Physics in 2015.

Placing the detector underground makes it less vulnerable to seismic activity on the surface.

“The distance that mirrors move when gravitational waves arrive is minuscule,” explained Miyoki. “In other words, there are so many other factors that can move the mirrors. One of such disturbances is vibration from the ground. To eliminate the effects of ground vibration, we have suspended the mirrors with wires. Placing KAGRA underground helps reduce vibration, keeping it at one-hundredth or one-thousandth of the vibration levels on the surface.”

“The hardest noise to remove is the vibration of the mirrors themselves caused by heat. The idea to cool the mirrors had been around since the 1990s, but we had to overcome many technical hurdles because mirrors conduct heat very poorly. KAGRA therefore had its own material — single-crystal sapphire — developed for the mirrors so they can conduct heat better.”

Furthermore, to reflect the beams accurately and efficiently, the surface of the mirrors has been polished to the limit, to remove even a bump of 0.1 nanometers, according to Miyoki.

To keep areas containing the laser source and mirrors free of the smallest bits of dust, the team has also developed a superclean room. 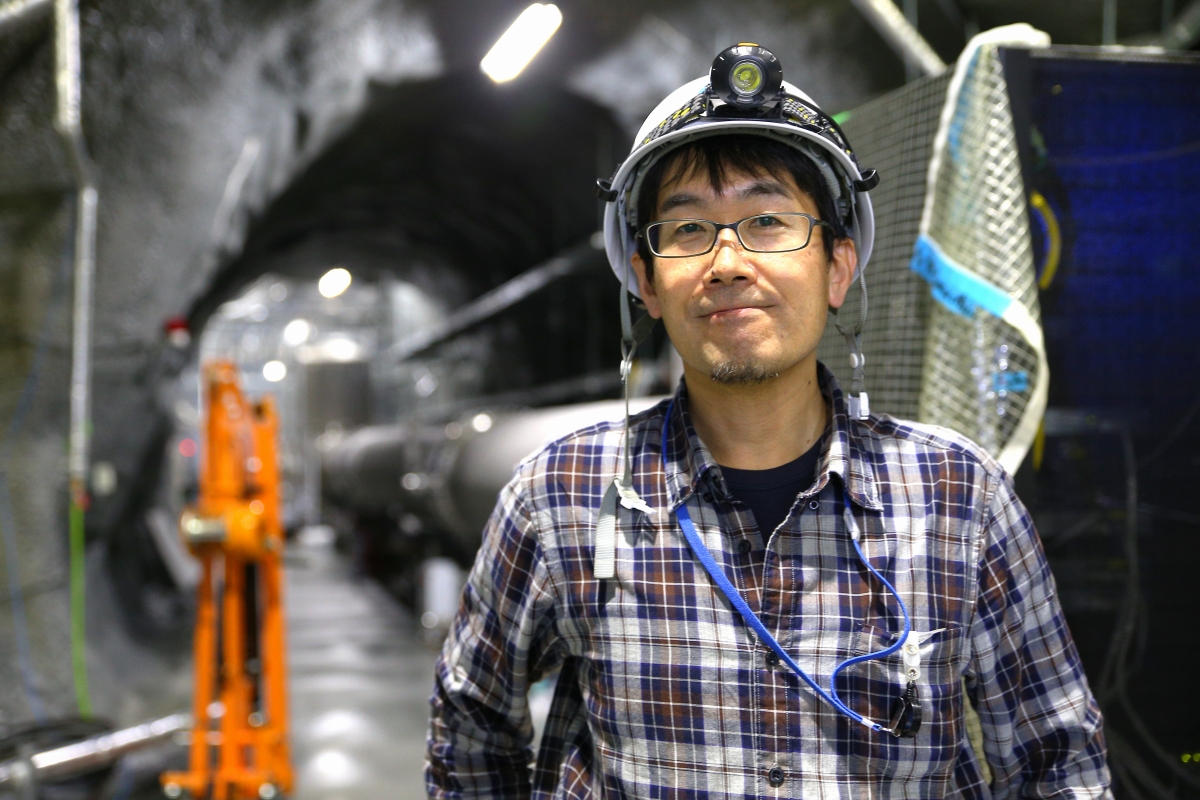 Takayuki Tomaru, who was associate professor at KAGRA collaborator High Energy Accelerator Research Organization (commonly known as KEK) at the time of the interview. He is now professor at the National Astronomical Observatory of Japan.

“Superclean rooms are so clean that they have only one or two particles of dust measuring 1 micrometer in diameter in the 1 cubic-meter space. It’s like finding just 10 aji (horse mackerels) in the entire Pacific Ocean.”

In addition, wires made from aluminum with the purity of 99.9999 percent are used to link the refrigerators to the mirrors in ultrahigh-vacuum containers called cryostats.

“The aluminum we have developed has made efficient cooling possible; such aluminum can conduct heat better in a cryogenic environment — several hundred times more efficiently than at room temperature.”

These technological marvels are important not just for gravitational-wave detection; they could find their uses in other fields in the future.

The superclean-room technology, for example, can be used in assembly lines to manufacture precision products with lower defect rates. Or sake breweries could prolong the expiration date of their products by reducing the chances of bacteria creeping in, according to Miyoki.

The refrigerators for the mirrors, which are compact and produce little vibration, can also help with the development of high-quality MRI devices, which require small-size refrigerators, Tomaru said.

Collaborators from all around

In addition to Tomaru, the KAGRA project involves researchers from various other institutions, seeking the input of — and cooperation with — top physicists from all around.

Lucia Trozzo, a postdoctoral researcher from Italy, has been working on the vibration isolation system of KAGRA mirrors. She previously worked at Virgo.

KAGRA has adopted a mirror suspension system similar to Virgo’s.

The sapphire mirrors, which are 22 centimeters in diameter, are hung from a multilayered pendulum over 14 meters long. The structure was created to keep them absolutely still so they can detect only the motion caused by gravitational waves, Trozzo said, noting that each part of the system, including the mirrors and the suspension wires, needs to be perfectly controlled to remove seismic and human motions.

Yuki Inoue, assistant professor at the National Central University in Taiwan, is a member of the calibration team. He studies the reliability of gravitational-wave signals received.

“I had always been interested in calibrations, because all the measured data must be examined to be considered valid. Various approaches are necessary to verify measurements, such as through devices, calculations and theory.”

Inoue, who divides his time between Taiwan and Japan, says KAGRA, set to be the first gravitational-wave detector in Asia, is important in building an Asia-wide network of scientists in this field. Thanks to KAGRA, gravitational-wave physics has emerged as a viable research option for young researchers in Taiwan, he said.

Interestingly enough, KAGRA researchers also work closely with fellow scientists at LIGO and Virgo, despite the fact that, prior to LIGO’s first detection of gravitational waves in 2015, the three teams had fiercely competed with each other to be the first to clinch that honor.

Miyoki says KAGRA’s launch is essential for scientists to detect the location of gravitational waves; it takes at least three detectors in different locations of the world to figure out where the waves come from, which they analyze through differences in their arrival time, he said.

Furthermore, the observatories are so highly complicated and delicate that they cannot operate around the clock. When hit by a glitch, it takes time for the scientists to get the system back in order, Miyoki said, noting that one detector can operate only around 60-70 percent of the time.

“Operating a gravitational-wave observatory is like spinning 1,000 plates at the same time,” Miyoki said. “If even one plate falls, the system will fail. Considering that, we will have the three sites in operation together around only 30 percent of the time.”

As a result, the consensus among the researchers is that at least three detectors, each of which has a high degree of sensitivity to detect gravitational waves coming from a different direction, are needed for proper observation; it’s ideal to have four or five detectors around the world, he said.

“True, we competed with each other to achieve the first detection,” Miyoki said. “But even in those days, we shared all of our technologies with each other. That’s because detection of gravitational waves is so technologically daunting and was long considered almost unachievable in the physics community.” 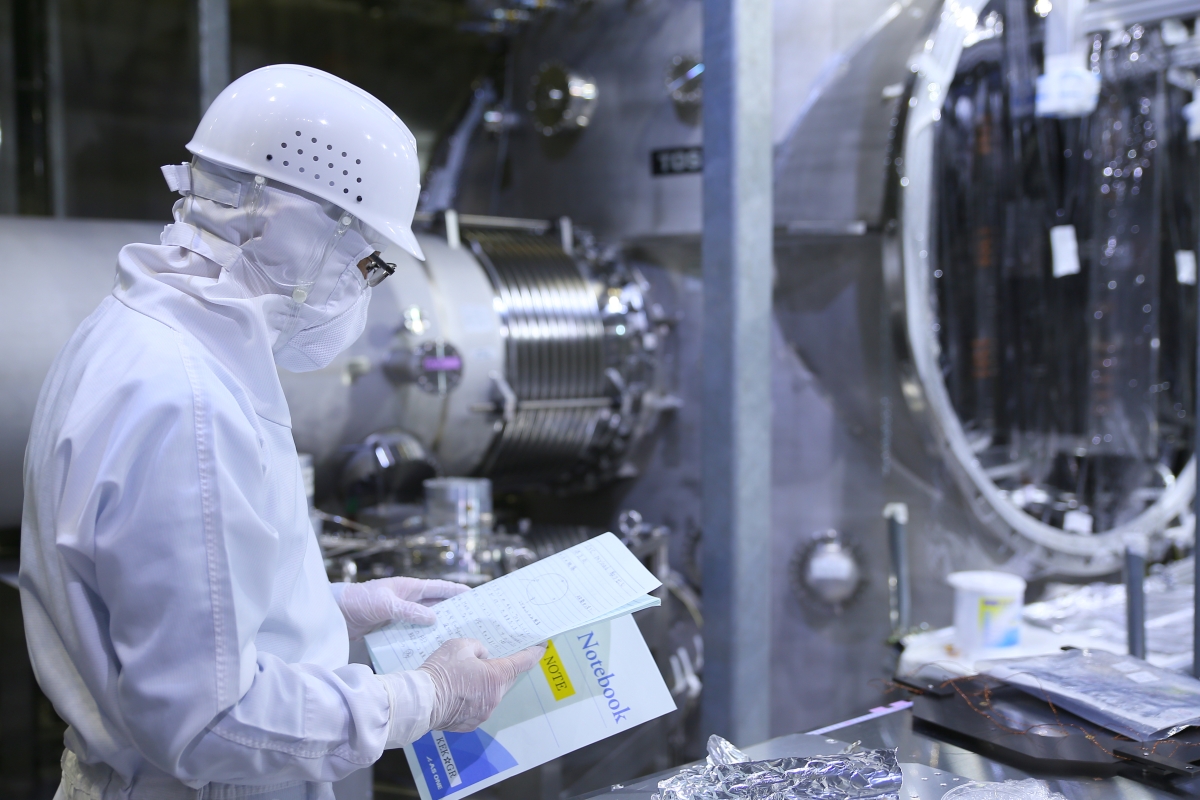 KAGRA could contribute greatly to the advancement of astrophysics, considering that insights gained from gravitational-wave experiments so far have been extraordinary.

On April 1, LIGO and Virgo kicked off their third and latest yearlong joint observation run of gravitational waves, called O3. KAGRA is preparing to join O3 hopefully by the end of this year. When that happens, Miyoki said KAGRA could contribute greatly to the advancement of astrophysics, considering that insights gained from gravitational-wave experiments so far have been extraordinary.

“Through gravitational-wave observation, we are beginning to see a picture of the universe after the Big Bang that is completely different from how we understood it before,” Miyoki said.

For example, scientists now know that the first gravitational waves detected in 2015 originated from the collision of two black holes some 1.3 billion years ago.
Since then, the LIGO-Virgo collaborations have confirmed nine more black hole mergers and one merger of neutron stars.

“Before, we could only imagine black holes and their mergers only in theory, but researchers have proven directly that black holes do exist, and that the two black holes merged as they spun toward each other. Such events used to be considered extremely rare, but observations have shown that they are not. That alone shows how what we accept as common knowledge can no longer be regarded as such,” Miyoki said.

“New observations have spawned new theories and stories on the birth of the universe. In decades to come, I’m hopeful that our research would yield even bigger insights and make valuable contributions to astronomy.”