Cats get Alzheimer’s, too!? Animals that hold the key to intractable human diseases

Cats get Alzheimer’s, too!?
Animals that hold the key to intractable human diseases

Alzheimer’s disease impairs memory and cognitive function, interfering with daily life. It was long believed that this disease only affected humans, but it has actually been observed in felines, too. This article will introduce a veterinary pathologist whose research showed the world that cats are vital to understanding this disease.

Over 46 million people in the world suffer from Alzheimer’s disease, a common type of dementia named after the doctor who first identified it. It has been 110 years since the disease was first reported, but a fundamental treatment has yet to be discovered. One reason why could be that this disease was until recently thought to be unique to humans, so animals that reproduced the same lesions seen in Alzheimer’s had previously not been found.

In 2012, however, the veterinary pathology team at UTokyo ascertained something very important, in which Chambers from Tochigi Prefecture played a leading role. Given the opportunity to carry out necropsies on Tsushima leopard cats that had been victims of traffic accidents, Chambers found distinctive lesions in their brains.

“Alzheimer’s is caused by protein building up in the brain as you age, killing the nerve cells in the hippocampus that are responsible for memory. The disease becomes visible as spot-like deposits of a protein called amyloid beta, which are referred to as ‘senile plaques,’ as well as in groups of phosphorylated tau proteins called ‘neurofibrillary tangles.’ Although senile plaques had been observed in animals aside from humans, such as dogs and monkeys, neurofibrillary tangles had not. However, thread-like nerve cells formed by an accumulation of tau proteins — in other words, neurofibrillary tangles — were found in elderly Tsushima leopard cats. Taking into account the data acquired during a study on cheetahs in a zoo around the same time, I felt that felines held the key to this disease.” 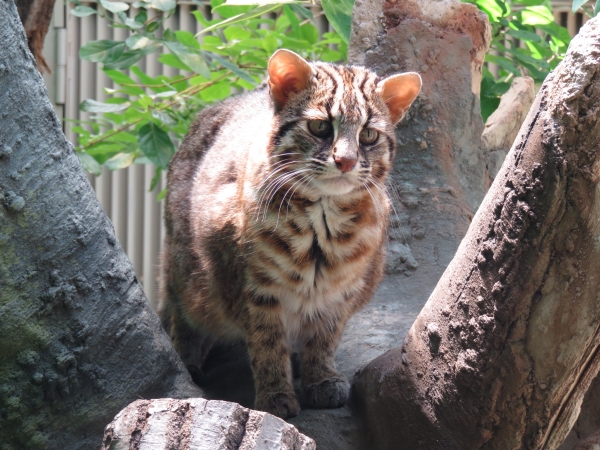 The Tsushima leopard cat, a protected species of the leopard cat family that in Japan can only be found in Tsushima, Nagasaki Prefecture, and has been designated a National Natural Monument. With improvements in road infrastructure throughout their habitat, it is now not uncommon for them to become victim to traffic accidents.
(CC)A machun 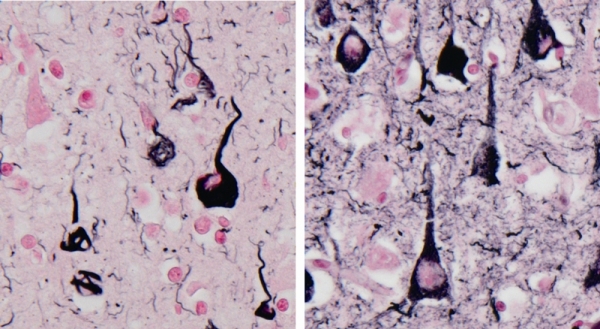 Chambers thus overturned the hypothesis that Alzheimer’s disease was a result of nerve cell deaths caused by senile plaques and neurofibrillary tangles formed due to an accumulation of amyloid beta proteins, and proved that the two are independent phenomena. He then decided to turn his attention to a species of feline more familiar to us than the exotic kinds like cheetahs and wildcats: the domestic cat. Upon examining the brains of dead elderly cats, not only did the results come out the same as the other feline necropsies, but the amino acid sequence of the amyloid beta proteins accumulated in cat brains was different from that of other animals, and quite similar to that of humans. It is difficult to determine whether animals have dementia just by looking at their symptoms; however, with this discovery, cats had been proven essential in uncovering the pathology of Alzheimer’s.

“I believe that things we cannot explain about human diseases can become more understandable when comparing humans to other animals. There are things that can be discovered by looking at animals that do not get a particular type of disease, or animals that get a disease but in a different form. This is not only true with Alzheimer’s; I’m sure that if other neurodegenerative diseases like Parkinson’s and ALS that have been thought to be unique to humans were to be discovered in other animals, it would lead to medical treatments for people, too.”

Chambers, whose love of animals since childhood motivated him to become a veterinary pathologist, has recently become concerned that as the cat craze continues, the number of cat owners who agree to let their deceased pets undergo necropsies is declining. It is of course understandable that they want to see off a beloved member of their family properly. However, if more cat owners were willing to let their pets be examined, it would undoubtedly contribute to veterinary medicine.

For a while, there were two cats living the Chambers’ home: Uribo and Tanu. But now, only Tanu remains. According to the young veterinarian pathologist who handles animals with both love and resolve in his heart, no tau proteins were discovered in the brain

of his beloved cat who passed away from kidney failure in Spring 2018. 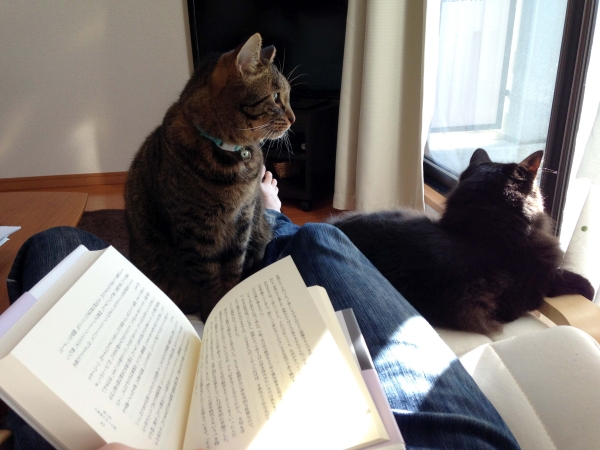 Chambers enjoying a book with Uribo (the striped tabby) and Tanu