Traveling through time with UTokyo buildings

If we were to take 70 years as a unit of time, we could say that UTokyo has just entered the third period since its founding. It feels like just the right occasion to reflect on the past. Here, we selected some of the many photos that have accumulated over the course of 140 years in the UTokyo archives, and organized them by a number of themes to show how the University has changed through time. In this feature, the pictures will do the talking. Let us travel back in time and revisit the historic buildings of UTokyo.
Main Gate
In the 1911 yearbook of the College of Law (currently the Faculty of Law), there is a picture of the wooden provisional Main Gate, and the attached sign reads “Tokyo Imperial University.” The building you see in the distance is the College of Science (now the Faculty of Science); the Yasuda Auditorium did not exist yet (Photo 1). The Gate as we know it today, with a kabuki (top section or lintel), was built in 1912. Many events were witnessed here by the Main Gate, including the visit of the Emperor, whose car was driven through the Gate in 1940 (Photo 2), as well as the protest against the hoisting of the mourning flag upon the death of the Emperor in 1989. You can see the University staff pushing protesters back as they try to enter the gate (Photo 4). 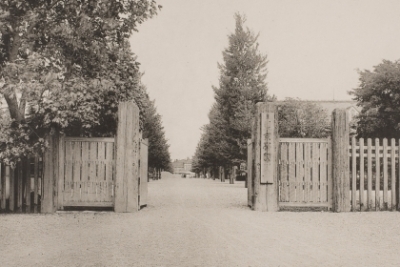 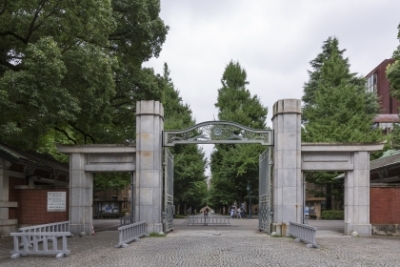 Yasuda Auditorium
With a generous donation from Zenjirō Yasuda, the Yasuda Auditorium (formally called the University of Tokyo Auditorium) was completed in 1925. Student protesters barricaded themselves in the building in 1969 during the University of Tokyo Protests (Todai funsō) (Photo 3), and it suffered a lot of damage during their altercations with the police (Photo 4). Graffiti was also found on the walls, both inside and outside the building (Photo 5). Thereafter, its hall was used as a storage space (Photo 6), until its renovation in 2014. Now, the building is used as a place to hold commencement ceremonies and other important events. 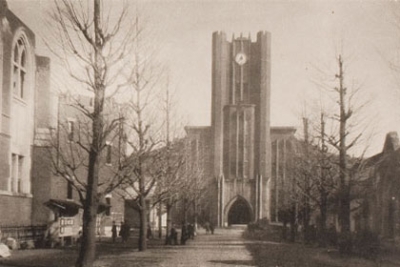 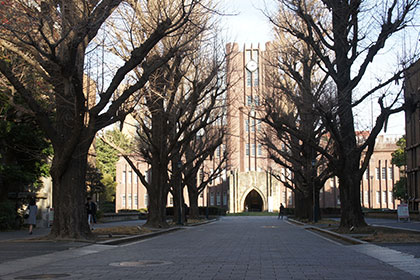 Akamon Gate
The Akamon Gate was built in 1827 for Maeda Nariyasu, the 12th daimyo of the Kaga Domain and the 13th feudal lord of the Maeda clan, to welcome his bride Yōhime. As you can see in the oldest photo of it remaining at the University (from the Records of 50-year History of Imperial University of Tokyo), the Gate remains virtually unchanged (it was moved 15 meters west at the end of the Meiji period) (Photo 1). Right after the Great Kanto Earthquake in 1923, safety confirmations and notices were posted on the Gate (Photo 2). Later, a signpost was placed near the Gate that read “Kokuhō Akamon” (“National Treasure Akamon”) (Photo 3), but since Akamon later changed from a National Treasure to an Important Cultural Property, the word “Kokuhō” was painted over. Now, there is a new signpost put in place printed with just “Akamon” (赤門). 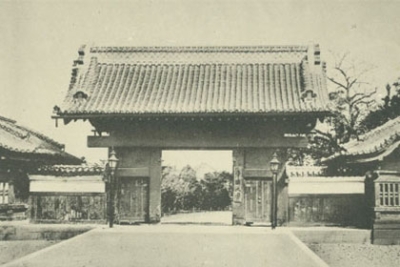 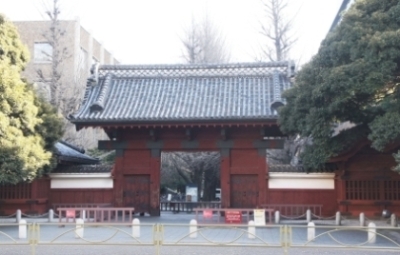 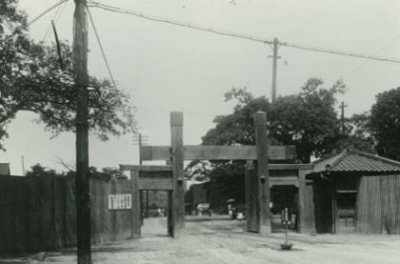 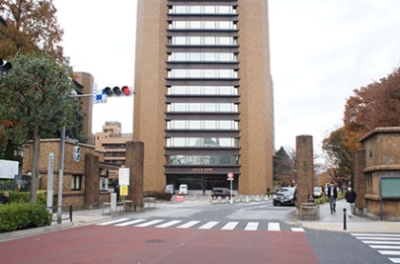 This gate leads to the University of Tokyo Hospital, with city buses and taxis going back and forth. In the past, the Gate had a door like the others; in the 1912 Faculty of Medicine yearbook, you can see people going through the door in their kimono (Photo 1). In the picture taken in 1981, there is a bus squeezing through the Gate, reminding us of the times when the Gate was narrow (Photo 3). The building next to Tatsuoka Gate was a night-time clinic, and is now the University’s Information Center. The Administration Bureau towers over you as you enter the Gate (Photo 4). 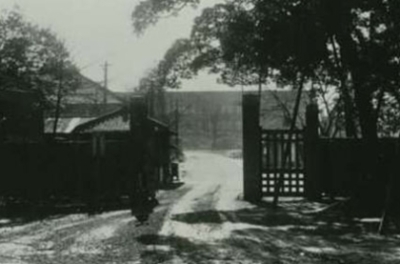 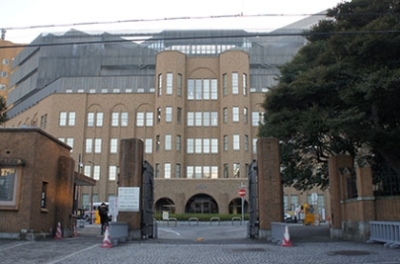 This gate is convenient when coming to Hongo from the Asano Section or Nezu Station areas. As you enter, you see the Faculty of Engineering Building 3 right before you; it was designed by Yoshikazu Uchida, and was completed in 1939 (it is not yet there in Photo 1). The building was demolished in 2010, and a new Faculty of Engineering Building 3 was constructed in its place. Built in 2013, it replicated the original design, but was modernized with the integration of advanced features. 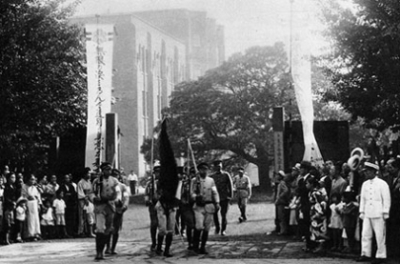 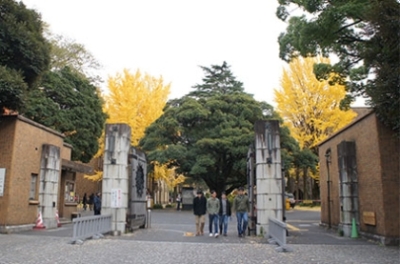 The First Higher School was originally in this area, which was called Mukōgaoka. The exchange of campuses between the First Higher School and the Imperial University Faculty of Agriculture in Komaba was finalized in 1935, and with that the students of the First Higher School stepped through the School’s Kōryō main gate for the last time (Photo 1). The Nō-seimon Gate was built in its place in 1937. The cars and townscape in front of the Gate illustrate the changing times (the pictures (Photos 2 and 3) belong to the Faculty of Agriculture). The Gate was refurbished in 2003, with new doors made from centuries-old Kiso hinoki (cypress) trees.

In the 1928 yearbook, you can see students ice skating on the frozen pond (Photo 2). There is also a summertime picture of people swimming in the pond; it seems to have been used as more of a recreational spot back then. The Administration Office and the Sanjō Assembly Hall, holding offices and meeting rooms, stood tall as though they were looking down on the pond; these buildings are no longer, having burned down during the Great Kanto Earthquake (the Sanjō Assembly Hall was rebuilt in 1935, and the Sanjō Conference Hall was constructed in 1986). The pond underwent large-scale dredging in 1977 (Photo 3). 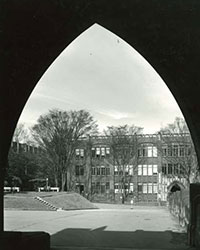 This is the first building Yoshikazu Uchida designed for the UTokyo campuses (construction was completed in 1924). In order to both preserve the valuable original building and respond to a rising demand for expansion, a method of constructing a high-story extension on top of the original was implemented in 2005. 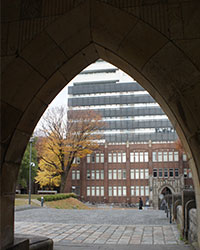 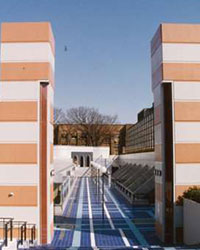 This athletic center was built beneath the sports field for the 100th anniversary of the University. There were once shops in the adjacent above-ground building that had previously housed a part of the former sports field facility, including a soba restaurant and a bakery. This was later demolished, and a building with student support offices was constructed in its place. 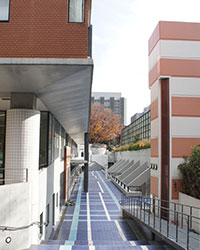 The building itself was constructed in 1910, and it was used as a garage and a bindery for the library. It is the second oldest standing building of the University after the Koishikawa Annex of the University Museum. In 2005, it was turned into a University goods shop, becoming a hub of communication between UTokyo and outside communities. 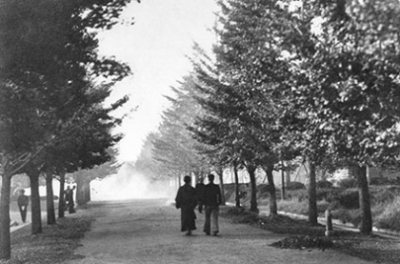 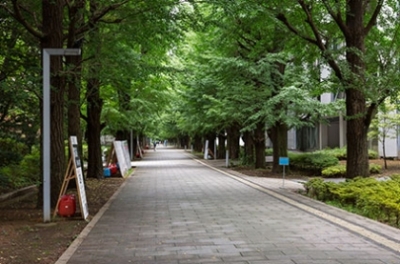 A road lined with ginkgo trees that runs east-west of the Komaba I Campus was named the Yayoi Road (Yayoidō) by the Headmaster Kenkichi Mori of the First Higher School, when the school was relocated from Yayoi to Komaba. For the students who live in Komaba, it is and always has been a place to wander and get lost in thought. It also became a road of riots, however, during the University of Tokyo Protests (Photo 3).

The sign on the Gate has changed from “First Higher School” to “College of Arts and Sciences, the University of Tokyo” (東京大学教養学部). The filigree pattern on the doors, however, with oak leaves, olives and olive leaves, remains unchanged. This is, of course, the First Higher School’s crest. The main building with the clock tower is now known as Building 1.

Previously, there used to be two stations: Higashi-komaba (East Komaba) and Nishi-komaba (West Komaba). The former was renamed Ichikōmae Station (meaning “in front of the First Higher School”), and to Tōdaimae Station in 1951. This station was located by the railway crossing right outside the Bairin Gate. In 1965, it merged with Nishi-komaba, which had been renamed Komaba Station by this point, becoming Komaba-tōdaimae Station as we know it today.

The Komaba Research Campus succeeded the former Aeronautical Research Institute of Tokyo Imperial University, which used to be located in Etchūjima. The former main building of the Institute, which boldly stands directly in front of the Main Gate, was later renamed Building 13. It is now home to the Research Center for Advanced Science and Technology. The growth of the trees that were planted around the building depicts the passing of time.

The Institute for Solid State Physics

The Institute for Cosmic Ray Research building has a unique design, with an atrium inspired by the cylindrical water tank in the Super-Kamiokande facility. The land adjacent to the west side of the building was vacant until 2009, when the Kavli Institute for the Physics and Mathematics of the Universe building was constructed under the concept of “spiraling academia.”