Continuing to make contributions to the Paralympics

The photo shows two smiling students in the Olympic Village at the Beijing Paralympic Games. Honored with the University of Tokyo President’s Award in 2008 for their contributions to the achievements of the Japanese Olympic Team, they are Ryuji Hiramatsu (left), then a fourth-year doctoral student in the Graduate School of Agricultural and Life Sciences, and Sayaka Fujiwara, a third-year doctoral student in the Graduate School of Medicine. Now, 12 years later, both are active as faculty members at UTokyo. 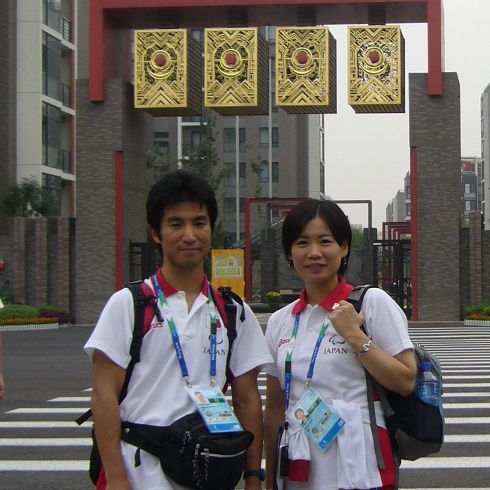 Assistant Professor Ryuji Hiramatsu, who had been active as a middle- and long-distance cyclist on UTokyo’s Bicycle Racing Team, entered the world of para-sports when he accompanied Japan’s team to the 2003 Para-Cycling World Championships. Afterward, he continued to support the athletes, first in an assisting role at the Athens Games, and later at the Beijing Games as an officer with Japan’s national team headquarters. At the London Games, Hiramatsu had a role as para-cycling team manager, and at the Rio Games served as a staff member with the Japan Sport Council. Starting with Masaki Fujita, a winner of five Paralympic medals, the Japanese para-cycling team brought home medals from four consecutive Paralympic Games, and Hiramatsu was always there to provide background support.

“I've mainly been involved in making power measurements. We use sensors to measure the force applied to the pedals and analyze the output. Most cyclists usually aren’t able to maintain sustained pedaling at the upper limit of their ability, but in practice runs they can achieve sustained pedaling near their limit if you show them the data and explain it convincingly. This is how I support their efforts to take their performance to the next level.”

Since 2018, Hiramatsu has been working to strengthen Japan’s para athletics team, and has turned his eye to the wheelchair racing event, given that it is another wheel-based sport like bicycle racing. Not that many investigators involved in sports research are prepared to head out to the banks of the Arakawa River early in the morning four times a week and ride alongside a wheelchair athlete at a steady 30 km pace over a practice course. If athletes are to devote their lives and push themselves to the limit, it is crucial that a researcher they can trust continuously runs or cycles along with them.

As the final Paralympic event, the wheelchair marathon will be held in Tokyo and is certain to attract the attention of Tokyo residents. Incidentally, Hiramatsu is currently affiliated with the Laboratory of Veterinary Anatomy. What do veterinary science and wheelchair marathons have in common?

“Wheelchair racers are humans that use their hands to move at high speed. When comparisons are made with the forelimbs of animals that run on all four legs, the similarities become more obvious. Going forward, I have plans to examine this correlation on a deeper level.”

During high school, Lecturer Sayaka Fujiwara was on the gymnastics team. However, one day she failed in landing from the balance beam and tore ligaments in her knee, and thus was forced to give up the sport. As an outcome of that experience, she decided to become a sports doctor. After joining UTokyo’s Department of Orthopaedic Surgery, Fujiwara became pregnant and took that opportunity to transfer to the National Rehabilitation Center for Persons with Disabilities. It was there that she would have her first encounter with the field of para sports.

After developing expertise in this field, she assumed a position as a physician with Japan’s national team to the Beijing Paralympic Games. The period of several months that transpired from her preparations for deployment to Beijing to the conclusion of the Games proved themselves to be a major turning point in her life.

“Although I formerly had a sense of pity for people with disabilities, that perspective changed after I met athletes with disabilities and witnessed their incredible levels of performance up close.”

During the 5000-meter wheelchair racing final, one of the team members was involved in a crash accident. Although she was considered to be a candidate for the gold medal in the marathon event scheduled several days later, she suffered serious injuries that required emergency transport back to Japan. Just prior to traveling to Beijing, it was discovered that another national team member was then undergoing chemotherapy. Sadly, she died just before the Games.

“There was always a sense of vigilance that sporting activities involving individuals with disabilities could lead directly to critical medical situations. I felt that I had entered a formidable new world.”

Later, the physical medicine and rehabilitation department in University of Tokyo Hospital opened an outpatient clinic for persons with limb deficiencies. After studying clinical pediatric prosthetic practice in Canada, Fujiwara decided to return to UTokyo. Since 2017, she has worked with the UTokyo Sports Science Initiative to hold a school for children with limb deficiencies to learn from Paralympians and others.

“Children who are normally quiet in the hospital become much more playful and active out on the athletic field. That was a surprising discovery.”

Fujiwara is one of only a few Japanese individuals to have earned International Olympic Committee credentials as a sports doctor. At the Tokyo Games, she plans to be on call at both the Olympic and Paralympic villages. Her dream from her high school days of pursuing a career as a sports doctor appears set to be fulfilled.