Advancing veterinary medicine, research and education A hospital and graduate school working together

Advancing veterinary medicine, research and education
A hospital and graduate school working together

Known familiarly as “UTokyo’s animal hospital,” the Veterinary Medical Center located in the Yayoi Campus has long been treating animals and educating in the field of veterinary medicine by working closely with the Graduate School of Agricultural and Life Sciences. Hajime Tsujimoto, the head professor of the Laboratory of Veterinary Internal Medicine and previous head of the Center, tells us about research conducted through the reciprocal relationship formed between two organizations.

According to Professor Tsujimoto, the previous head of the Veterinary Medical Center, in the past, cows, horses, dogs and cats were all lumped together in the field of veterinary medicine. Due to the difference in the intentions behind keeping domestic livestock and pets, they were eventually categorized as either “large animals” or “small animals.” With the latter, however, the treatment of dogs was more common historically, and cats were treated as an extension of dogs.

“However, cats are not small dogs. Their bodies, characteristics as well as symptoms are all different. In recent years, there has been a growing sentiment that cats and dogs should be treated separately. This is the case in Japan as well, and a book aimed at veterinarians called Neko no Shinryo-shishin (Textbook of Feline Medicine and Surgery) was published this year (2018). It argues that cats should receive treatment specifically designed for cats.”

The Veterinary Medical Center cooperates closely with the Department of Veterinary Medical Science of the Graduate School of Agricultural and Life Sciences, and has long operated whereby a lot of the staff work concurrently at both organizations. Clinical data produced by the Center becomes important material for veterinary medical research, and knowledge acquired through research is used to improve treatments at the Center. The total number of animal patients at the facility exceeds 14,000 annually, which is the highest amount at a university-affiliated veterinary hospital in Japan. It is a secondary medical institution as all the animals come to the Center through referrals from private practitioners, so there are a lot of cases of difficult and incurable diseases that come their way.

“This unfortunately means that some do not recover from their illnesses. I believe that it is our duty to diagnose properly and come up with appropriate options that are best for the animal and the owner.”

Tsujimoto, who heads a section of the internal medicine department at the Veterinary Medical Center and also leads the Laboratory of Veterinary Internal Medicine at the Graduate School, is a specialist in feline lymphoma. It is an illness where lymphocytes, which are a type of white blood cell found in blood, become cancerous. This is most common in the gastrointestinal tract or the nasal cavity for cats, and the latter is particularly painful for the cat as well as the owner as the swelling leads to the compression of eyeballs. Lymphoma caused by viruses was once prevalent, but decreased over time with the use of vaccinations; what is now on the rise, however, is nonviral lymphoma. 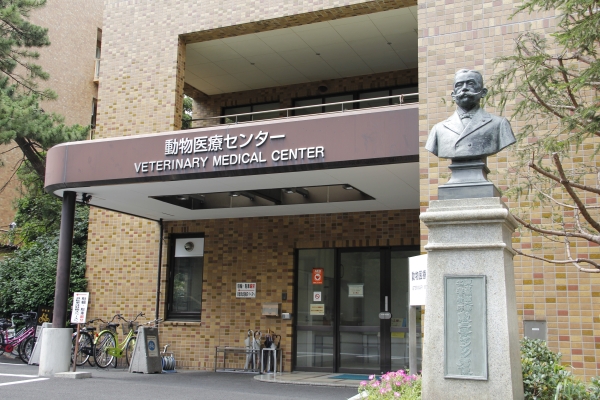 Watching over the animals and veterinarians by the entrance of the Veterinary Medical Center stands a bust of Professor Janson with a spectacular handlebar mustache. 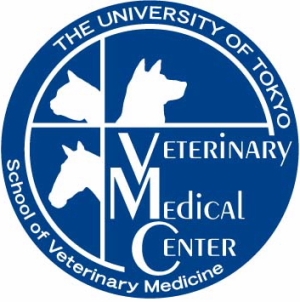 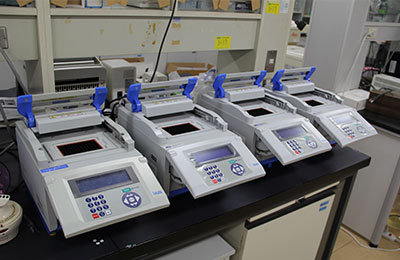 “I believe that the change in disease type is a result of the progress in feline medicine, which has in turn increased cat life expectancy, and therefore the number of older cats has risen. Fortunately, we have discovered that radiation therapy is often effective with nonviral nasal lymphoma, resulting in long-term remission.”

Currently, Tsujimoto and the Center are focusing on the application of the Polymerase Chain Reaction (PCR) to the diagnosis of lymphoma. Through amplifying minute amounts of DNA by up to one million times using a device called a thermal cycler, accurate diagnosis is possible without putting strain on the animals.

“There are still only five or so places in Japan that are putting this genetic diagnosis procedure into practice, one of which is our center. It is currently mainly used for the diagnosis of lymphoma, but I hope to apply this method to other illnesses by cooperating with the department of pathology and molecular diagnostics.”

Looking at the true conditions of diseases that are observed in clinical practice and dealing with animals’ illnesses as well as their owners earnestly – that is the mission of the Laboratory of Veterinary Internal Medicine, established in 1893 by Professor Sennosuke Katsushima, who was a student of Professor Janson. Tsujimoto, the seventh professor of the laboratory, carries on this tradition that spans over 125 years. 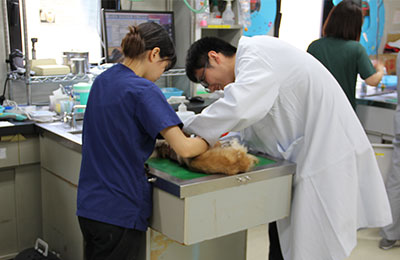 Treatment taking place at the Center. A graduate student specializing in veterinary medicine is learning while assisting. 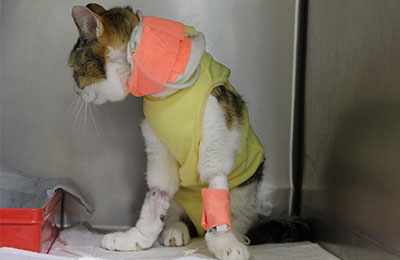 A cat hospitalized for kidney disease and diabetes. It had been lying down, but mustered up enough strength to sit up for the camera. 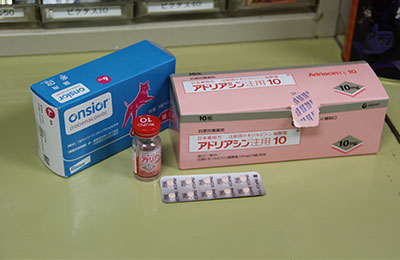 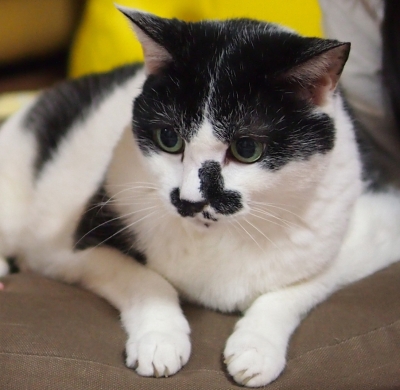 Tsujimoto’s late cat Uran, named after the younger sister of Atom, the main character of the Astro Boy cartoon (the previous cat he had in his family home until his university days was named Atom). She passed away in 2016 at the age of 19.