This series looks into diversity-related issues and initiatives at UTokyo, through interviews with faculty members. The university strives to create a place where people with diverse backgrounds can thrive.

Creating an open campus for all to study and conduct research

Eight posters with messages for female high school students are showcased at the entrance of the Administration Bureau Building on the Hongo Campus.

Professor Kaori Hayashi at the Graduate School of Interdisciplinary Information Studies remembers the tough times leading to her career as a researcher after enrolling in the Graduate School of Sociology (currently Graduate School of Humanities and Sociology) in 1992. The journalist-turned-graduate student often felt the urge to break into a run while on the train to pick up her two children at the nursery school before its doors closed, and she sometimes ended up having to change their diapers in a shared office. When the nursery was closed, she would take her children to the Ueno Zoo before dropping in to her office, and ate lunch with them in the university cafeteria where there were only men. But in the male-dominated environment — where men naturally took the helm of academic societies while usually women comprised only office staff and her — it was hard for women to raise their voices and be heard.

“It wasn’t just a glass ceiling, I carried an iron plate on my back,” Hayashi said, reflecting back on the challenging environment at that time.

About 30 years on, in April 2021, UTokyo drew wide attention from the media and the public in Japan as the majority of the university’s executive vice presidents were women for the first time in its history. One of the five women appointed by President Teruo Fujii is Hayashi, who is tasked with the university’s diversity and international affairs.

“We’ve finally come this far,” said Hayashi, who is a media and journalism studies expert and has long worked on gender issues in the media. Noting that these days she even hears some of her male colleagues talking about the importance of diversity — something unheard of in the 1990s — Hayashi says she sees changes in people’s awareness.

When looking at the university as a whole, however, it is still dominated by men and in terms of gender diversity, UTokyo is “off to a negative start,” Hayashi stressed. “We must start by firmly acknowledging where we currently stand.”

According to The University of Tokyo Databook, in 2020, around 13.9% of the associate professors were women. The ratio is even smaller for professors, at a mere 8.3%. As for undergraduates who entered the university in April this year, 21% were female. In graduate schools, 27% of new students in 2020 were women. “We need top-notch students to be competitive, and to provide education to many talented students to nurture world-class researchers. Given such a mission (for the university), it’s problematic that just 20% (of undergraduate) students are female while men make up 80%."

“Leading universities have the social responsibility of valuing diversity and inclusion. Diversity and inclusion also enhance an academic institution’s competitiveness, and are a critical component of a leading university’s strategy” Hayashi said. “To change the way each and every one of the UTokyo members thinks is our first task. This is a revolution. It’s a very important job.” 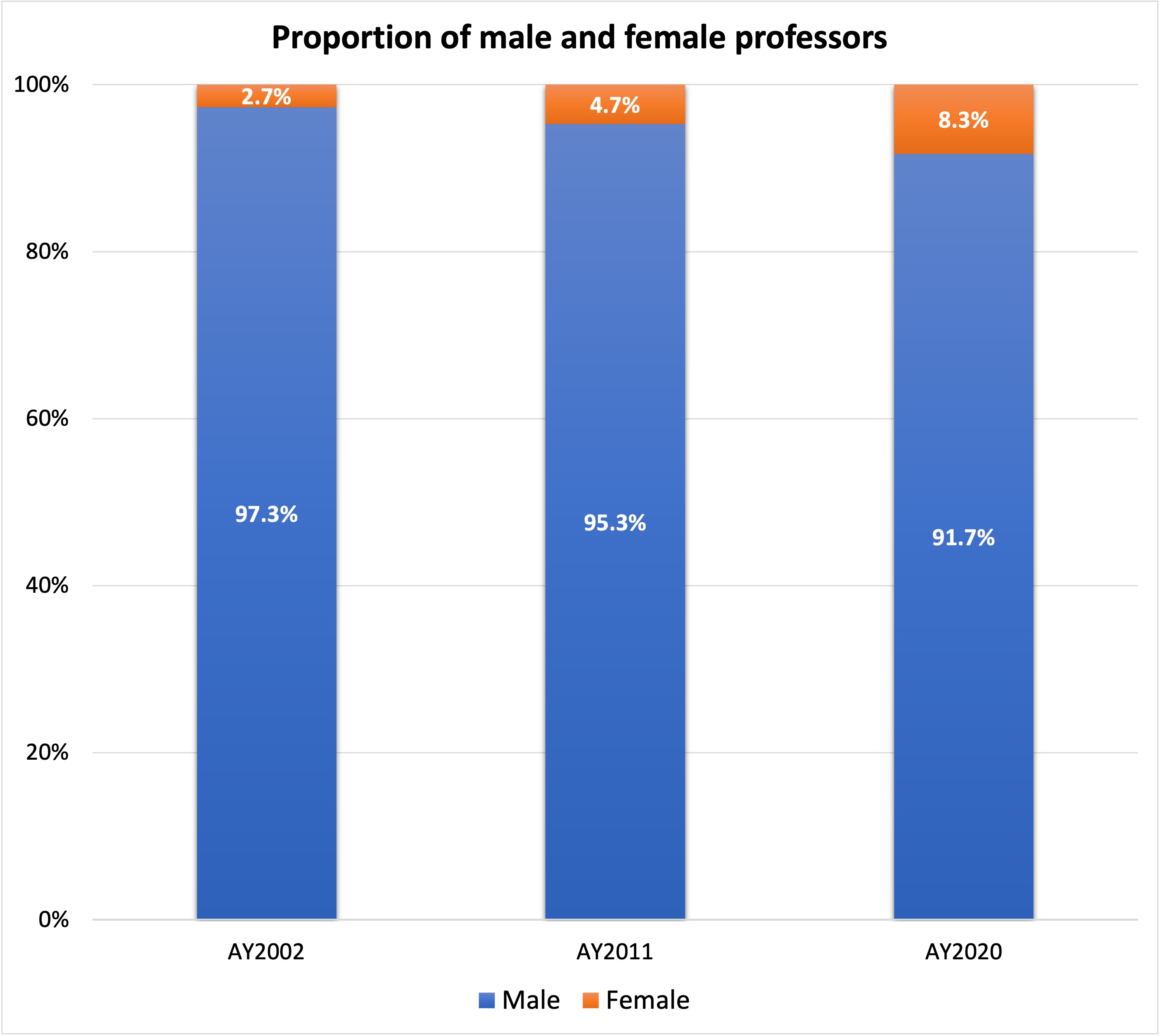 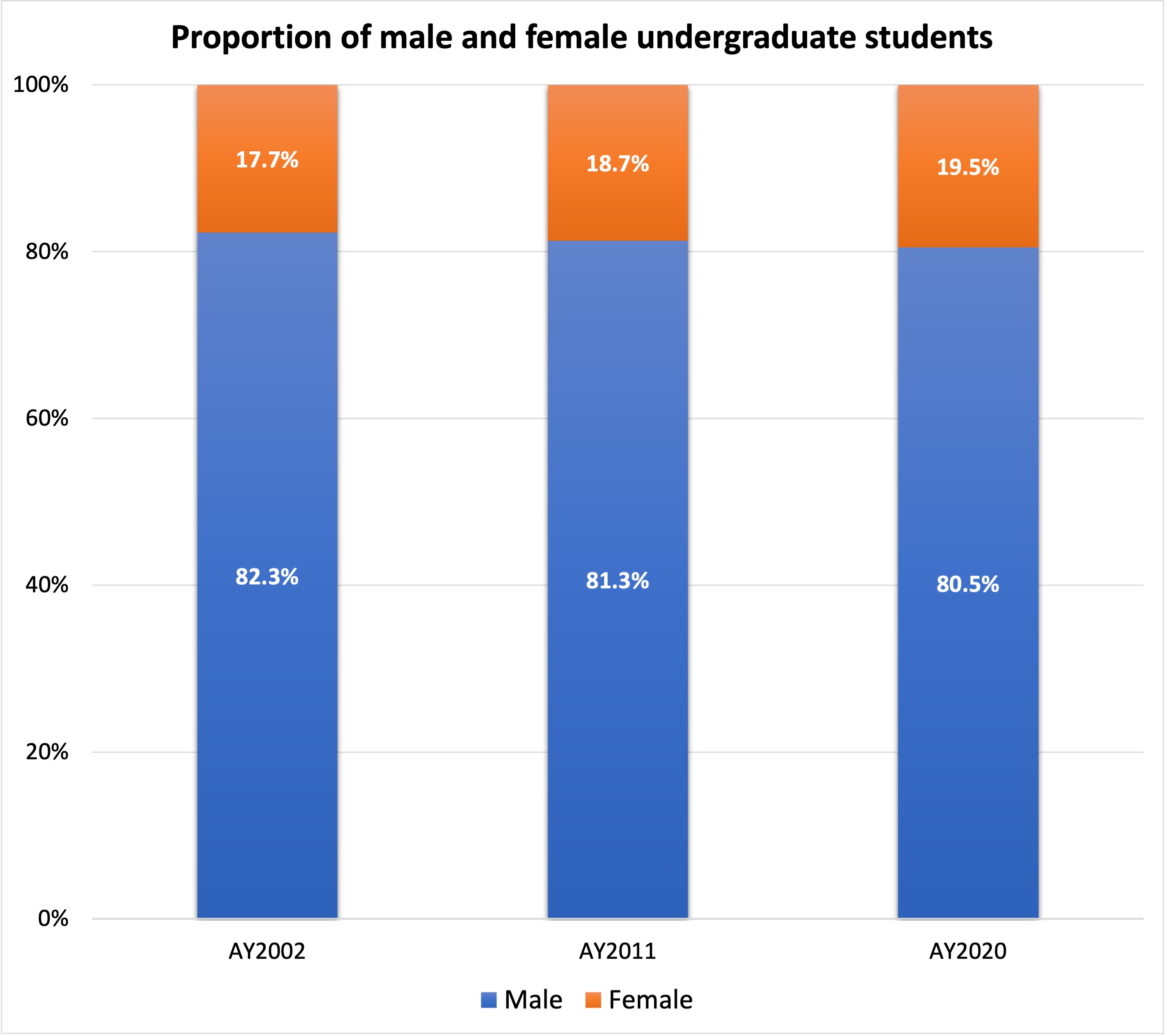 Source: The University of Tokyo Databook

What is UTokyo for women?

Founded in 1877, UTokyo opened its doors to women for the first time in 1946, nearly 70 years after the university began accepting male students. Although the number has grown slowly from the initial 19 admitted, the university has continued to be heavily male-oriented.

The established image of UTokyo as a men’s university, however, has long been perceived as something positive, Hayashi said. “For men, entering UTokyo means opening a path for them to become a bureaucrat or otherwise succeed in life. UTokyo has become a status symbol, which I believe is a good thing for the university. But it only applies for one side of society, the male side,” Hayashi pointed out.

It is important to stop and think about what it means to be admitted to UTokyo for women, Hayashi says, because it is not necessarily considered a positive thing. “Up to now, UTokyo has operated with an assumption that it exists to offer education for men,” she explained. “Has the university welcomed female students? Women have had a more complicated relationship with the university. And we must realize that the university is at least partly to blame.”

Given that diversity and inclusion are part of the university’s vision, the university must give serious thought to this issue, and the same can be said about its stance toward other minority students, including LGBT students, students with disabilities and international students, Hayashi said.

She said that we should understand what “structural oppression” is. In an environment where men have traditionally occupied an overwhelming majority, other people are inevitably marginalized and suppressed.

And that is far from ideal in the competitive world of research where it’s critical for everyone to feel free to voice their opinions and develop their ideas. “We must create a university where every member can stand at the same starting line and grow from there,” Hayashi said.

Support for female students and researchers

In an effort to address the gender imbalance, UTokyo launched the Office for Gender Equality in 2006 and has taken various measures, such as providing financial housing support for female students, organizing visits by current female students to their alma mater to promote the university to female high school students, undertaking restroom renovations and actively promoting the hiring of female researchers. The results of these initiatives are gradually starting to bear fruit, but Hayashi says more needs to be done.

One of the schemes is to provide further support for currently enrolled female students and other minorities. Since the number of women is extremely small on campus, female students might feel lonely and have no one around to talk to about problems specific to women. Sexual minority students are also feeling isolated. And above all, “we need to change the way the majority male students think. We are planning to set up a unit in the Office for Gender Equality devoted to nurturing the next generation of students to offer education, care, and networking opportunities to men, women and others of the next generation. With this new organization in mind, we have just set up a working group to explore its implementation,” Hayashi said.

UTokyo is also preparing video content for first- and second-year undergraduate students to deepen their understanding of diversity and inclusion. In addition, the university conducted a survey on awareness and the status of diversity among UTokyo students, faculty and staff, between December 2020 and January 2021, and is currently analyzing the results.

As the executive vice president in charge of diversity and international affairs, Hayashi's goal is to make the university a place where everyone feels comfortable to conduct research and receive an education. In order to achieve this goal, she hopes the offices with different expertise on diversity — the Office for Gender Equality, the Disability Services Office and the International Education Support Office — will join forces and discuss creating an inclusive campus.

“My aim is for gender and diversity to enter the mainstream on our campuses. That is, I want people to think, ‘If I don’t grapple with these issues, I am biased as a researcher’ or ‘I need to be conscious of this,’ by raising their awareness and for everyone to share this general consciousness,” Hayashi said. “That is my role, my goal.”