A lifetime of migration between oceans and rivers: the science of mysterious eels Multi-regional networks are crucial to their conservation

The year 2021 marks the start of the United Nations Decade of Ocean Science for Sustainable Development, a major campaign to advance the science of the ocean, which is the birthplace of all life and sustains the lives of organisms on Earth. This year, the University of Tokyo welcomed as its new president a scientist who has lived and worked with the ocean. From engineering, physics and biology to agriculture, law and economics, we introduce UTokyo’s ocean research and marine education activities as illustrated by examples from various fields.
Multi-regional networks are crucial to their conservation

A lifetime of migration between oceans and rivers: the science of mysterious eels 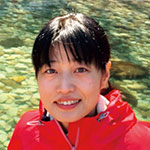 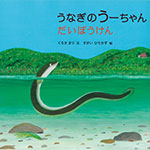 Since the 1970s, the University of Tokyo has been a global frontrunner in the field of eel research. According to Assistant Professor Mari Kuroki, who has inherited this legacy of research work, there is only one spawning ground of Japanese eels. But the area in which they grow spans across various countries and regions in East Asia. Kuroki is working on creating various types of content with the belief that the education of and cooperation from many people are crucial in conserving the eels.

Have you heard of the special name of the larval stage of the eel, “leptocephalus”? It’s hard to imagine that these larvae with transparent and leaf-shaped bodies grow up to become the slimy and wiggly eels we are familiar with. Fascinated by the beautiful leptocephalus, I started studying the freshwater eels that travel between the oceans and rivers.

In the area of marine research, the University of Tokyo has been at the global forefront of studies on the spawning ground of Japanese eels, and conducted a long-term survey on the subject starting in the 1970s. In May 2009, a research team led by Professor Katsumi Tsukamoto of the Ocean Research Institute (now Atmosphere and Ocean Research Institute), discovered Japanese eel eggs for the first time along the West Mariana Ridge in the North Pacific Ocean, about 3,000 km away from Japan, thereby determining their spawning ground. The discovery garnered a lot of attention back then.

In addition to the Japanese eel, there are many other species of freshwater eels throughout the world. However, the birthplaces of most of these species remains a mystery. To shed light on this mystery, we have been studying the spawning and migratory ecology of eels in various areas of the Pacific, Indian and Atlantic oceans. In 2016, as part of an international joint research project with scientists and students from nine countries and regions, we conducted a large-scale expedition in the South Pacific for around three months. During this research cruise, we collected newly hatched leptocephali, which enabled us to estimate the eels’ spawning areas in Oceania and their migration routes along the South Pacific current. In the future, I would like to expand the scope of our research to study how eels respond to global climate change, as well as conservation measures for eels.

For creatures like eels that spend their entire lives migrating long distances through different aquatic environments from oceans to rivers, even a single environmental problem could immediately affect the amount of their resources. To put it bluntly, eel resources are affected by the general global environment.

Eels have long been a highly nutritious food source for humans. There is only one breeding population of Japanese eels, which are often eaten as kabayaki [grilled eel] in Japan. Their spawning sites are precisely located in the open ocean, but the rivers and lakes where they grow up are spread throughout East Asia, including Japan, South Korea, China, Taiwan and Vietnam. This means that in order to conserve this species, it’s crucial to secure the cooperation from all these countries and regions where the eels live. If scientists from various fields share a common enthusiasm for academia and develop an interdisciplinary network based on a deep sense of mutual trust, I believe we will be able to protect our shared biological resources.

Education is also important for the conservation of organisms from a long-term perspective. To this end, I’m working to create picture books and web-based illustrated books to convey the appeal of marine life to the next generation of children and to create opportunities for them to get interested in the global environment. These books and web-based materials, with their engaging illustrations and underwater photos, can be used for reading aloud to children at home and at libraries, as well as in educational institutions such as elementary and junior high schools. I’ve realized that such content can be of great use, especially during the COVID-19 pandemic, as I have received great feedback about it from the educational front.