This series looks into diversity-related issues and initiatives at UTokyo, through interviews with faculty members. The university strives to create a place where people with diverse backgrounds can thrive. 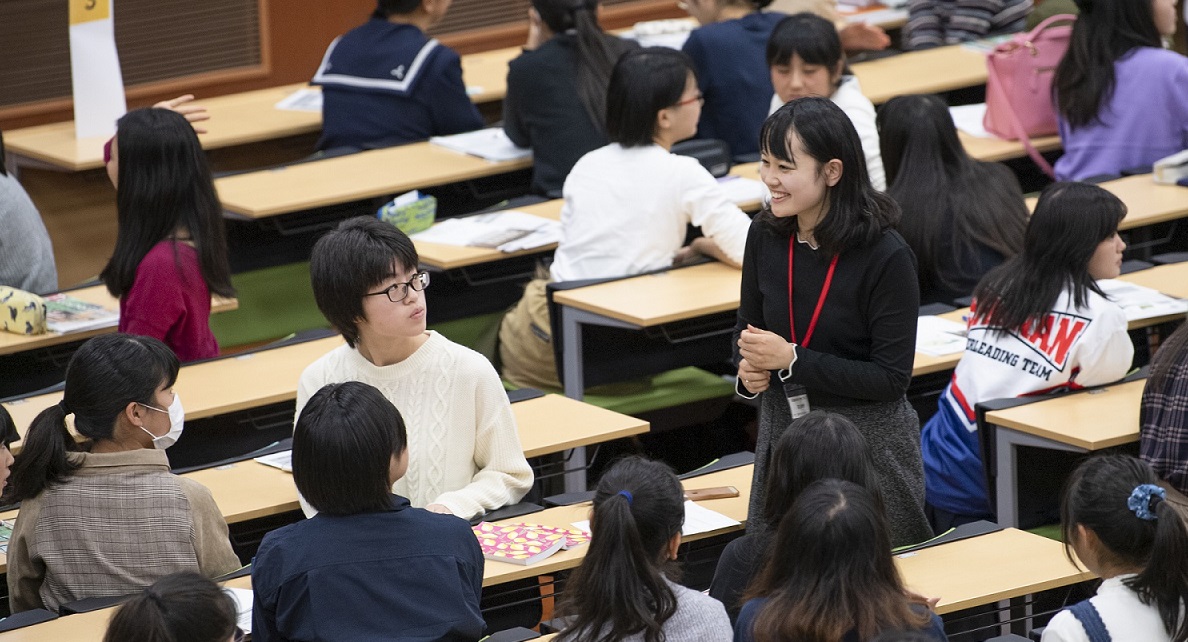 Participants chat with a UTokyo student (standing) at an admissions guidance fair for female students held in 2019 on the Hongo Campus.

Professor Miho Takahashi says female high school students tend to shy away from applying to the University of Tokyo, regardless of their academic abilities. Serving since 2019 as the head of the Office for Gender Equality’s Section for Nurturing Female Students, Takahashi calls on women to consider applying to the university instead of shutting out the idea altogether.

“It would be a shame to let go of such a grand opportunity without giving it any thought at all,” said Takahashi, a professor of clinical psychology at the Graduate School of Education. “I want female high school students to give serious thought, for once, about studying at UTokyo and see if it is worth a try. And to help make that judgment, I want them to see and experience UTokyo for themselves.”

As one of the efforts to provide a tangible experience of what UTokyo is like, the Office for Gender Equality has been holding an admissions guidance fair for female high school students since 2006. At the annual event, faculty members hold information sessions on various support measures available to female students, including financial housing support, while UTokyo students share their experiences. The gathering also offers a chance to talk casually with UTokyo students in small groups of four to five people, which, according to Takahashi, has been very popular with participants.

“By chatting with UTokyo students, the university prospects may come to see the students as ‘normal people’ like them, and by interacting with various people, they may start to see the university as actually something that is very close and within reach,” she said.

Like many classes and events at the university, the gathering on the UTokyo campuses went online in 2020 due to the coronavirus pandemic. Although the participants cannot meet in person, the biggest advantage of holding it online is not having to physically travel to the campus, making it easier for people in remote places to participate. The number of student participants jumped from 292 for an in-person event held in autumn 2019 to 463 people for an online event held in October 2021. The participants joined the online event from various places, from Hokkaido to the north, Kyushu to the south, and even overseas.

“I encourage high school students to come to the event. And if they think, ‘The university is not for me,’ that’s fine. But I want them to give it a shot and participate to see what they feel,” Takahashi said.

The tendency to exclude UTokyo from their list of prospective universities is especially strong among female students in smaller cities and in places away from metropolitan areas, Takahashi said. One of the reasons, she believes, is the traditional view of gender, which pervades their regional society, and family and school environments.

“From the parents’ point of view, there is no need for their daughters to go to UTokyo,” Takahashi said, explaining that there are people who think going to a top university is counterproductive to marriage and becoming a good homemaker. “I am sometimes led to think that there is a stigma attached to women who are highly educated.”

Such views on gender are often unconsciously embedded in the students’ mind, casting on to themselves something like a spell with the refrain of “You can’t go to Tokyo because you are a girl. A national university is preferable. You have to enter a university straight after graduating from high school,” and so on, Takahashi said.

“It’s not like grown-ups are casting a spell on girls because they want to. Adults who themselves grew up under the spell may not even realize that it exists. And rejecting it might lead to feelings of self-denial,” Takahashi said. “But I believe the adults who are no longer under its influence have the responsibility to make the conscious effort to break the spell for the next generation.”

Having been born and raised in a small city in the central Japanese prefecture of Gifu herself, Takahashi said she understands the feeling. “I was also one of those students who never thought of applying to UTokyo when I was in high school,” she said. She embarked on her research career, only when she began to live her life by being true to herself, which was after she graduated from a women’s university and worked at a private company for about five years, Takahashi said. “That was when I felt for the first time that I could do what I really wanted to.”

“I don’t think UTokyo is the best choice for everyone. But I want to tell female students that everyone, including them, is entitled to choosing UTokyo,” she said.

One message that Takahashi always gives to high school students is to “make the choice that will expand their options.” If they are still not sure what they want to do with their lives, they should choose a university that will give them more chances in the future or enrich their relationships with others, she said.

“What’s really great about UTokyo is that you get to decide your specialization after you enter the university. You have plenty of opportunities to consider what’s right for you,” Takahashi said.

While the percentage of female students in UTokyo’s undergraduate programs currently stands at around 20%, in Takahashi’s seminar, the male-female ratio is flipped.

“The ratio varies depending on the faculty. The Faculty of Education, for instance, has the largest number of female students among the university’s faculties. And women are a majority in the field of clinical psychology, which I specialize in. In my seminar, men account for only 20%,” Takahashi explained. “There is such a place even in UTokyo.”

The academic system itself may be rooted in a culture centered on men and developed from there, Takahashi said. If so, the important thing is to expand or create a field of studies where women can play active roles, rather than trying to push women into the existing man-made, male-centered research areas, she said.

“When you create something that goes beyond the current academic system, you need people who can make that happen,” she said. “In that sense, I believe the 20% female students constitute is too small. That is why I believe we need to increase the number of female students.”

Describing her efforts to encourage more women to enter UTokyo as “planting seeds,” Takahashi said: “I hope they will come to UTokyo and grow. I believe the university has ‘soil’ rich enough for them to do so. For the sake of the university and society, as well as female high school students, I pray that they will get the chance to encounter and discover UTokyo.”