Hello, kitty Cats may be able to recognize their own names Research news

Pet cats can recognize their own names if their names are used regularly by their owners, according to new results by a team of researchers in Japan.

The research was performed largely within the lab of Professor Toshikazu Hasegawa from the University of Tokyo with Atsuko Saito, Ph.D., first author of the research paper. Saito is now an associate professor at Sophia University in Tokyo. 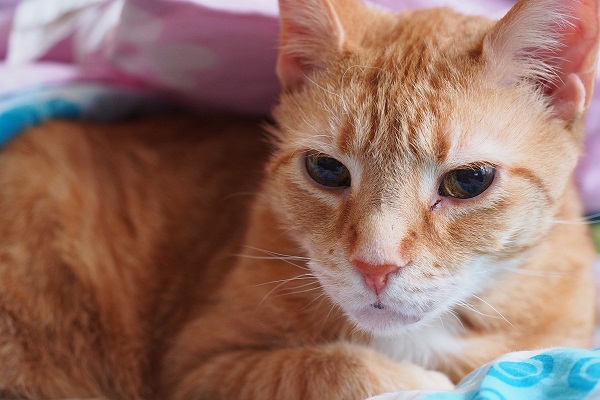 Pumpkin the cat, looking towards his owner. He may know his name and respond to it, when he feels like it. Image by Dan Devor, CC-BY-ND

This is the first project to study cats’ ability to understand human voices. Other research projects have discovered that apes, dolphins, parrots, and dogs can understand some words spoken by humans.

Saito speculates that mammals like dolphins and apes are naturally social animals and are therefore more inclined to interact with humans and respond to human cues.

“In comparison to those other species, cats are not so social. Cats interact with us when they want,” said Saito.

Projects to understand simple social behaviors like name recognition in cats may give clues to how we humans became social. Both humans and cats have evolved through the process of self-domestication, where the population rewards certain traits that then become increasingly common in future generations.

“There may be a common feature in the evolutionary process of sociality between humans and cats. Since cats are still evolving to become more domesticated, there is a possibility that we can see the process of evolution of sociality by investigating the social cognition in cats,” said Saito.

What’s in a name? 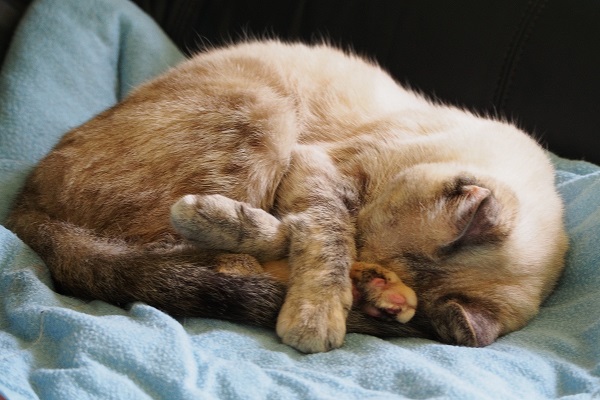 Luna the cat, hiding her face. She may know her name and choose to ignore it. Image by Dan Devor, CC-BY-ND

To test if a cat recognized its name, researchers tested the name against other similar-sounding nouns. For example, a cat named Kari would also hear recordings of the words hifu (skin) and shuto (capital city).

Researchers played recordings of their own voices and the cat’s owner’s voice saying five words: the first four words were the similar-sounding nouns and the final, fifth word was the cat’s name.

Researchers decided that cats responded to their name if they ignored recordings of other words, but moved their ears or heads when they heard their name. Cats rarely responded more enthusiastically, for example by moving their tails or bodies or by using their voice.

Cats who showed habituated weak responses to other similar-sounding nouns or the names of other cohabiting cats were significantly more likely to show strong responses to their own names.

Researchers state that a cat that did not respond to its name may still be able to recognize its name.

“Their lack of response may be caused by their low motivation level to interact with humans, or their feelings at the time of the experiment,” said Saito.

Single or many cats?

Cat cafés are businesses where people pay for a drink and to interact with the many cats who live in the café.

Researchers suspect that owners use their cats’ names specifically at home, whereas cat café visitors may use the cats’ names interchangeably.

Researchers analyzed data from 77 different cats in the research project, which was broken into four separate experiments performed over three years.

Cats studied in the research were between six months to 17 years old, a mix of male and female, and were mostly mixed breeds. Most cats were spayed/neutered and all but one were indoor-only cats.

Professor Toshikazu Hasegawa is now retired from the University of Tokyo.

According to previous research, cats can distinguish between their owner’s voice and a stranger’s voice, can follow a person’s pointing finger to find hidden food, and may change their behavior depending on their owner’s facial expressions.

Well-trained dogs can differentiate between 200 to 1,000 human words or labels.