Delegates of the symposium at the United Nations University in Tokyo. Image: © 2019 The University of Tokyo

Delegates from Hungary, Italy and Japan have signed an agreement to support and promote the growing scientific field of muography, using a revolutionary imaging technique. Muography is a way to see inside previously inaccessible large or solid objects with subatomic particles called muons. Technology spun off from this field could aid in achieving some of the United Nations Sustainable Development Goals, or SDGs.

On Sept. 9, 2019, a symposium took place at the United Nations University in Tokyo, which may help the academic and applicable aspects of the field of muography to grow. Speakers from around the world representing a refreshingly diverse range of academic interests gathered to make presentations. The speakers’ topics covered areas of academic or social matters which aid or are aided by muography in various ways.

The key point of this symposium was, through the presentations and ensuing networking event, to convey the increasing value of muography towards achieving some of the SDGs. These are a set of targets set out by the U.N. for encouraging sustainable and socially progressive activities in a broad range of industrial and political areas — in a nutshell, to make the world a better place.

Following the symposium, speakers and audience members witnessed a signing ceremony that could significantly boost the capacities and capabilities of the field of muography. Delegates from Hungary, Italy and Japan, who were also speakers at the earlier symposium, signed a trilateral agreement to share resources and support one another's academic efforts towards various muography projects. These will include the creation of new instruments as well as projects that make use of such tools to make new discoveries.

“Academics from Japan and Hungary have worked together already to produce international standards for our new technology and to make many groundbreaking observations,” said Professor Hiroyuki Tanaka, director of the International Muography Research Organization, or MUOGRAPHIX, at the University of Tokyo. “Thanks to the inclusion of Italy, we can all expand the range of our efforts and innovate even further.” 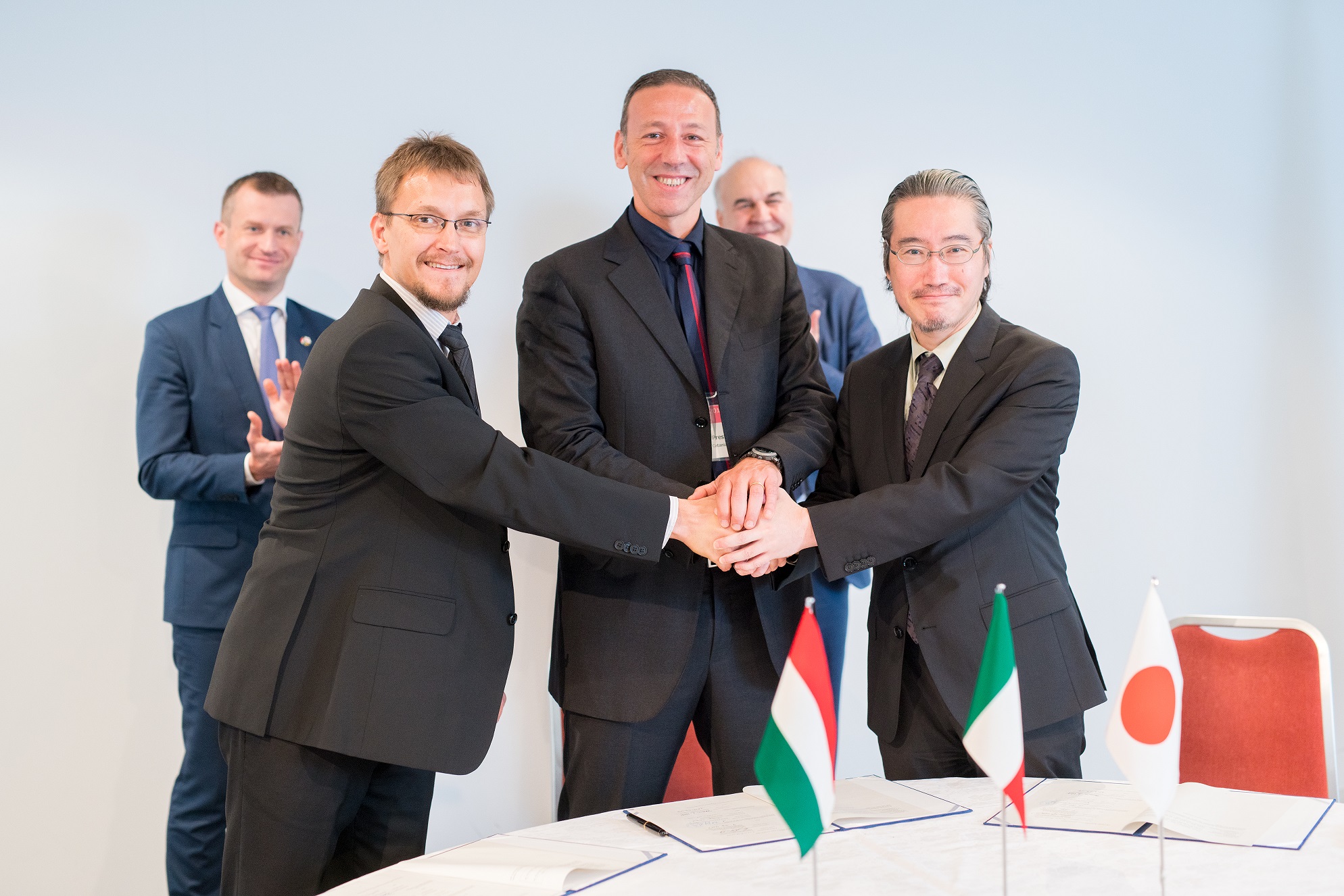 Some key areas for investigation by muographic study include volcanoes and caves. One reason for these three countries to desire academic partnership is because both Japan and Italy are very seismically active regions with many active volcanoes. And Hungary has many extensive cave networks which can now be studied in detail like never before. Subsequently, on Sept. 24, delegates from Chile also joined the agreement. Academics in Chile will contribute with a radio telescope in the country’s Atacama Desert to investigate spaceborne muons.

“This multinational academic cooperation will bring together ideas from different cultures which should unlock the full potential of muography in a way one nation alone could not,” continued Tanaka. “One way we hope this will manifest is to use our collective skills, knowledge and experience to contribute towards the United Nations Sustainable Development Goals. Muography could serve the energy sector, investigate natural disasters, aid civil engineers, and technological offshoots could even be useful in medical imaging and more.”