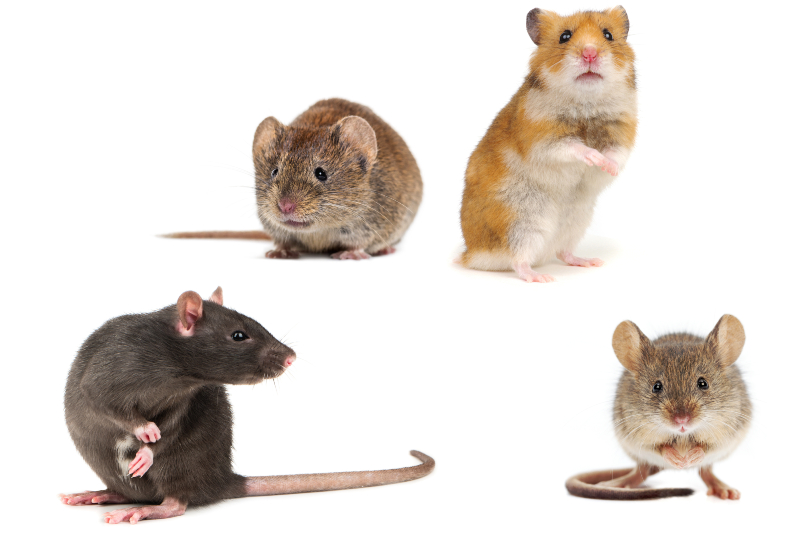 Rodents in the Cricetidae family, including voles and hamsters (top row) possess some genes to produce pheromone proteins. The ancestors of the Muridae rodent family, which includes rats and mice (bottom row), duplicated and expanded those genes. © Eric Isselée/Alekss/Andregric/Szasz-Fabian Jozsef/Adobe Stock

Experts who study animal pheromones have traced the evolutionary origins of genes that allow mice, rats and other rodents to communicate through smell. The discovery is a clear example of how new genes can evolve through the random chance of molecular tinkering and may make identifying new pheromones easier in future studies. The results, representing a genealogy for the exocrine-gland secreting peptide (ESP) gene family, were published by researchers at the University of Tokyo in the journal Molecular Biology and Evolution.

Researchers led by Professor Kazushige Touhara in the University of Tokyo Laboratory of Biological Chemistry previously studied ESP proteins that affect mice’s social or sexual behavior when secreted in one mouse’s tears or saliva and spread to other animals through social touch.

Recently, Project Associate Professor Yoshihito Niimura led a search for the evolutionary origin of ESP genes using the wide variety of fully sequenced animal genomes available in modern DNA databases. Niimura looked for ESP genes in 100 different mammals and found them only in two evolutionarily closely related families of rodents: the Muridae family of mice, rats and gerbils, and the Cricetidae family of hamsters and voles.

Notably, the Cricetidae had few ESP genes usually all grouped together in the same stretch of DNA, but the Muridae had both that same small group of ESP genes as well as a second, larger group of additional ESP genes.

To identify the source of what formed the first ESP gene, researchers compared additional genome sequences. They uncovered how random chance copied uniquely functional portions of two other genes, then coincidentally pasted them next to each other.

The DNA sequence of a gene includes portions called exons, which later become the functional protein, and other portions called introns, which do not become protein. Introns and exons are spaced throughout the gene with no apparent organization, introns interrupting essential functional portions of exons. Therefore, if a single exon were randomly copied and pasted elsewhere in the genome, any resulting protein fragment would have no meaningful function.

However, if an exon-only version of a gene were copied and reinserted into the genome, the chances of that new sequence remaining functional become much greater. Cells do create exon-only versions of genes called mRNA as part of the normal process of making protein from genes and cells do possess machinery, likely left over from viral infections, that can copy mRNA back into the DNA strand.

”This is not the normal way of things in cells, but it is a common source of evolution. We guess this is what happened to make ESP genes because the whole functional portion of the ESP gene is one exon, no intron interruption,” said Niimura.

Specifically, the research team discovered for the first time that ESP proteins contain an uncommon spiral shape characteristic of alpha-globin, a component of the iron-carrying hemoglobin protein in blood. DNA sequence comparisons revealed that multiple alpha-globin gene exons spliced together show a subtle but distinctive similarity to the ESP gene sequence.

“It doesn’t matter that hemoglobin is the source of the ESP pheromone. Any protein can become a pheromone if it is used for species-specific communication,” said Niimura.

Regardless of its shape, no protein can function without being in the proper location. In ESP proteins, the alpha-globin-derived portion is attached to a signaling portion, which directs the protein to be secreted from salivary and tear glands. Researchers identified the ESP genes’ location signaling sequence as resembling that of CRISP2, a gene expressed in mammalian reproductive tracts and salivary glands as well as the venom gland of some snakes.

The hemoglobin and CRISP genes are both ancient genes that existed in the shared evolutionary ancestor of vertebrates – all animals with a backbone – over 500 million years ago. The genetic shuffling that created ESP genes occurs relatively frequently in the cells of all organisms, but for these changes to become inherited evolutionary traits, the changes must occur in the sex cells so they can be passed on to future generations.

“The creation of new genes is not done from scratch, but nature utilizes pre-existing material. Evolution is like a tinkerer, using old things and broken parts to create some new device with a useful function,” said Niimura.

Niimura and his colleagues plan to use their new understanding of the evolution of this one family of pheromones to direct their search for new pheromones. The short length of many known pheromone genes makes it likely that similar pheromones are overlooked in standard genome searches. They also predict that salivary and tear glands, often overlooked because their small size makes them inconvenient tissues to study, may contain interesting future discoveries.