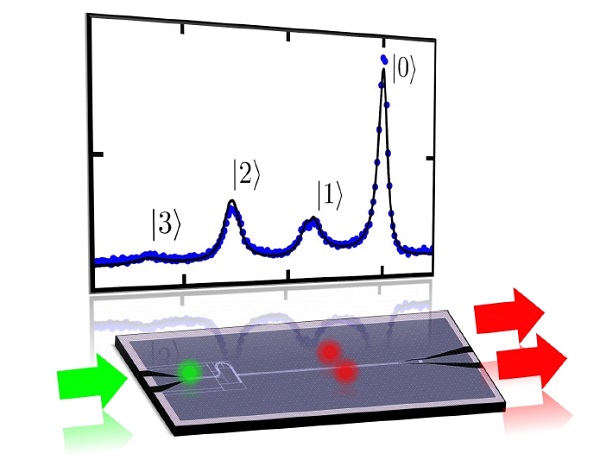 Illustration of quantum sensor based on hybrid quantum technology
The number of propagating microwave photons is difficult to observe directly. In the current study, researchers nevertheless succeeded in measuring the microwave-photon-number distribution by using a superconducting qubit device.
© 2017 Yasunobu Nakamura.

A research group at the University of Tokyo and its collaborators have demonstrated for the first time that magnons—the smallest units of energy, quanta, of the collective spin motions in a magnet—could be observed as discrete units.

Until now, a method for quantifying the collective spin motions in a magnet (ferromagnetic material) at the single-quantum level did not exist. The research group led by Professor Yasunobu Nakamura and Assistant Professor Yutaka Tabuchi at the Research Center for Advanced Science and Technology, the University of Tokyo, measured the number distribution of magnons excited in a ferromagnetic single-crystalline sphere by using a quantum bit—the minimum unit of quantum information—based on a superconducting circuit, called a superconducting quantum bit (qubit), as a highly sensitive detector. Superconducting qubits are widely recognized as an elementary device for future quantum computing. By using a similar technique, a group led by Nakamura and graduate student Shingo Kono at the Department of Applied Physics, Graduate School of Engineering, the University of Tokyo, measured the quantum-mechanical distribution of microwave photons in a transmission line.

"The technique we established opens up the plausibility of a new quantum-sensing application of hybrid quantum systems using a quantum bit based on a superconducting circuit," says Nakamura. He continues, "We also measured the number distribution of propagating microwave photons with a similar technique." Tabuchi adds, "We hope to accelerate our efforts in the research and development of quantum computing technology as well to further develop hybrid quantum technology combining various physical systems and superconducting quantum-bit devices."

The present study was conducted in collaboration with the Center for Emergent Matter Science at RIKEN.