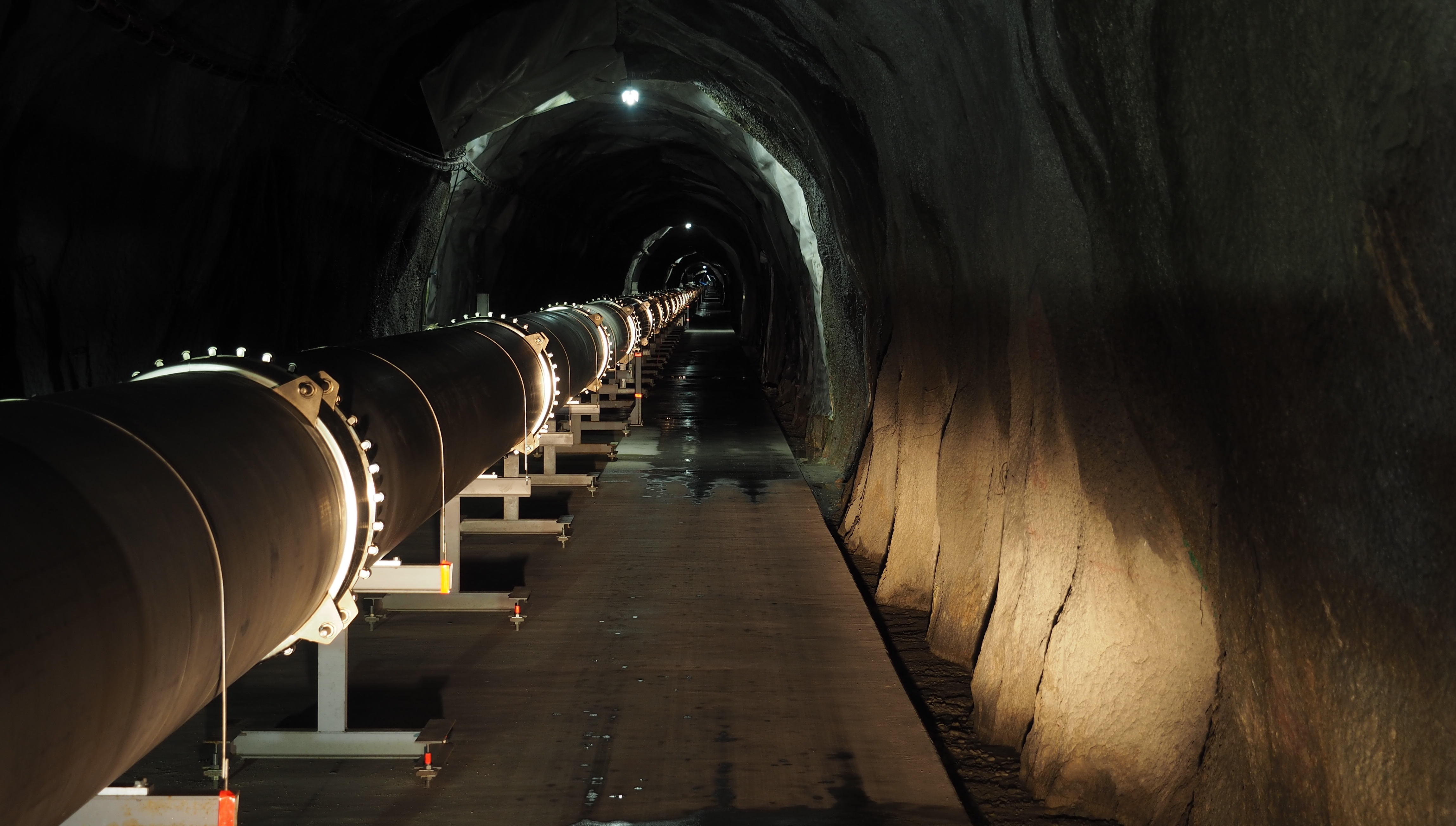 KAGRA, Japan’s gravitational-wave observatory in the central Japan town of Kamioka, Gifu Prefecture, celebrated the completion of its work to build the underground cryogenic detector on Oct. 4, 2019, a milestone in an international effort led by the University of Tokyo and other institutions to advance gravitational-wave astronomy and significantly deepen our understanding of the universe.

KAGRA, whose construction began in 2010, was built by a team of research organizations led by the University of Tokyo’s Institute for Cosmic Ray Research (ICRR), the National Astronomical Observatory of Japan (NAOJ) and the High Energy Accelerator Research Organization (KEK). It is the fourth advanced detector in the world, following the two at the Laser Interferometer Gravitational-Wave Observatory (LIGO) in the U.S. and that of Virgo, based at the European Gravitational Observatory in Italy.

Gravitational waves are ripples in time and space caused by cataclysmic events in the universe, such as supernovas and mergers of black holes. By joining as the fourth detector, scientists hope KAGRA will help them detect the sources of gravitational waves more precisely. 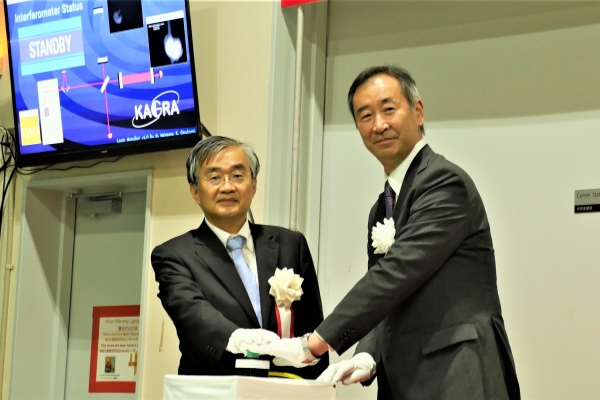 Takaaki Kajita, director of the University of Tokyo Institute for Cosmic Ray Research and principal investigator of the KAGRA gravitational-wave detector, pushes a button with UTokyo Executive Vice President Kohei Miyazono to symbolically set the detector in motion, in a ceremony to mark the completion of the detector in Kamioka, Gifu Prefecture, on Oct. 4, 2019.

In a ceremony held inside the tunnel where the detector is housed, Distinguished University Professor Takaaki Kajita, KAGRA principal investigator and director of ICRR, expressed joy at the completion of Asia’s first gravitational-wave detector, while anticipating numerous technical adjustments needed before it joins the other detectors for international observation of gravitational waves.

KAGRA hopes to participate in the third joint observation run by LIGO and Virgo, called O3, by the end of the year. O3 started in April 2019 and is scheduled to continue for one calendar year.

“We finally completed the construction project, which took us nine years,” Kajita said. “We are now fine-tuning the system so we can join the international observation, where we will take on our role as Asia’s gravitational-wave detector. We thank everyone who helped us come this far and ask for continued support in the future.”

The ceremony was attended by Kajita, UTokyo Executive Vice President Kohei Miyazono and Masatake Ohashi, a professor at the university who is in charge of the observatory, among others.

Miyazono said that KAGRA will be a launchpad where talented students and young researchers will gather from around the world and grow into “knowledge professionals” to tackle global challenges.

“Using KAGRA as a base, the University of Tokyo hopes to widen and deepen research and education in the field of physics and astronomy,” he said.

The ceremony included a performance of kagura, Shinto ritual music, played by elementary to high school students who belong to the kagura performing group of the local Otsu Shrine. KAGRA, short for KAmioka and GRAvitational wave, takes its name from the centuries-old traditional entertainment dedicated to the gods.

Later in the day, a press conference and the signing of a memorandum of agreement (MoA) on a research collaboration between KAGRA, LIGO and Virgo were held at a hotel in the city of Toyama, Toyama Prefecture. Some 40 journalists attended the press conference, where questions ranged from the scientific discoveries researchers hope to make to the scope of collaboration with research partners. 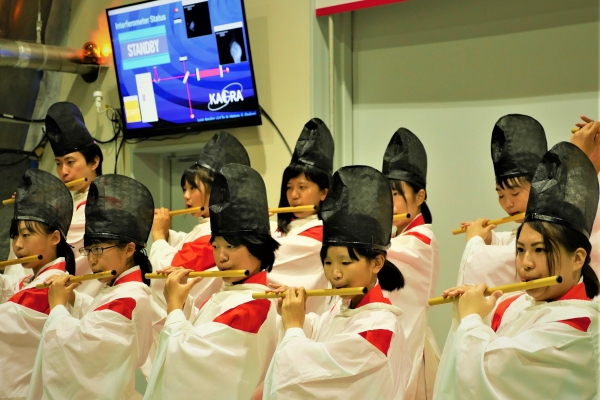 Local children play the traditional Shinto-style ritual music of kagura at the beginning of a ceremony inside the tunnel housing the gravitational-wave detector in Kamioka, Gifu Prefecture. 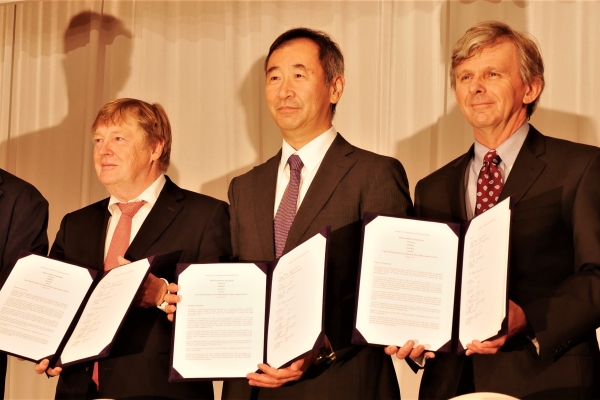 At the signing ceremony of the agreement, David Reitze, executive director of LIGO, welcomed the participation of KAGRA in an international network of gravitational-wave detectors, saying it would improve the detectors’ collective ability to catch and analyze gravitational waves far away from the Earth.

“These detectors are exquisitely sensitive, which means they don’t operate all the time,” Reitze said. 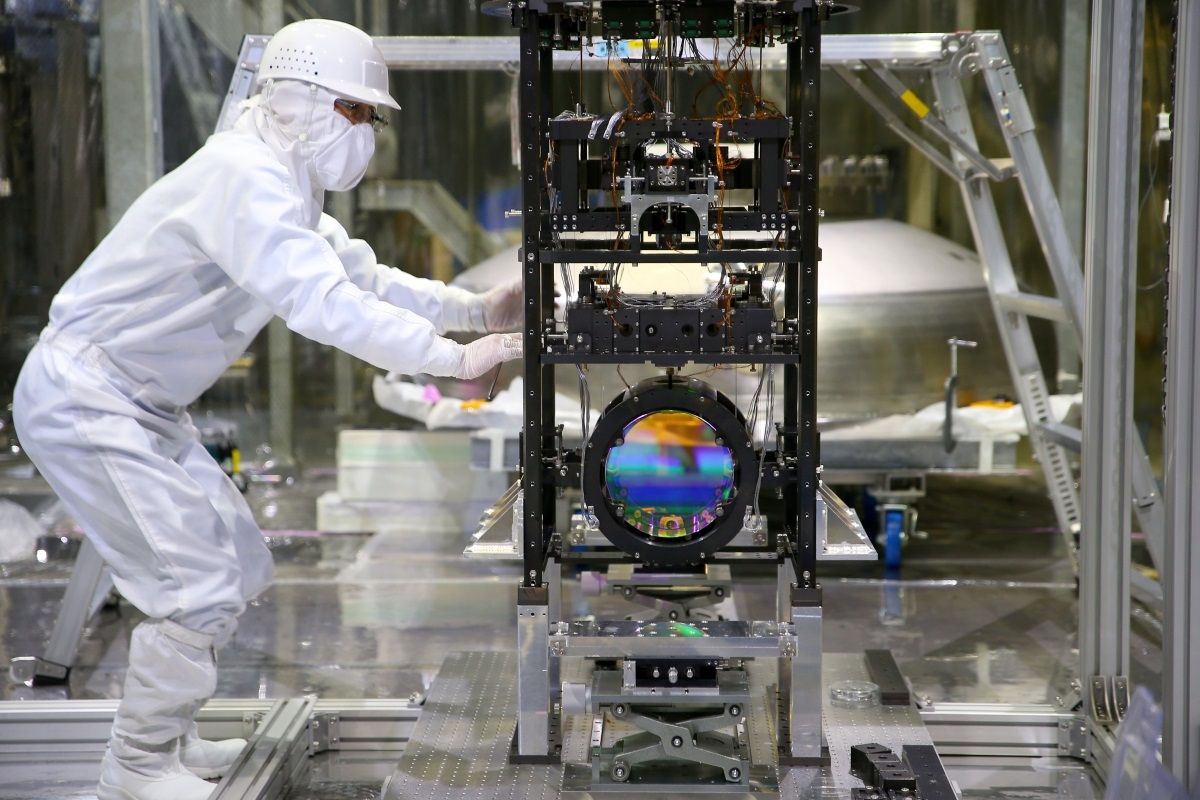 The MoA supersedes existing agreements between LIGO and Virgo. Once ratified by the governing bodies of each partner, the agreement will cover collaborative work initially until Sept. 30, 2023.

The KAGRA project is supported by the Ministry of Education, Culture, Sports, Science and Technology-Japan (MEXT). KAGRA is hosted by the Institute for Cosmic Ray Research (ICRR), the University of Tokyo, and co-hosted by the High Energy Accelerator Research Organization (KEK) and National Astronomical Observatory of Japan (NAOJ). The University of Toyama also supports KAGRA. The KAGRA collaboration is composed of more than 360 individuals from more than 100 institutions in 15 countries and regions around the world.