Down on the farm Students experience riding horses, milking cows and hugging piglets on three-day program

The pudgy piglets crowded around their mother in the pen, squealing for milk. The students stood watching them with wonder, commenting with big smiles on how cute the little auburn-haired creatures were.

“Want to hold one?” the professor asked.

A farmworker in charge of the pigs began scooping them up, one by one, and handing them to eager students. The students’ eyes sparkled as the piglets took to their friendly embrace. Some of the piglets were so relaxed that they even began to doze off, coddled by the students as if they were human babies. 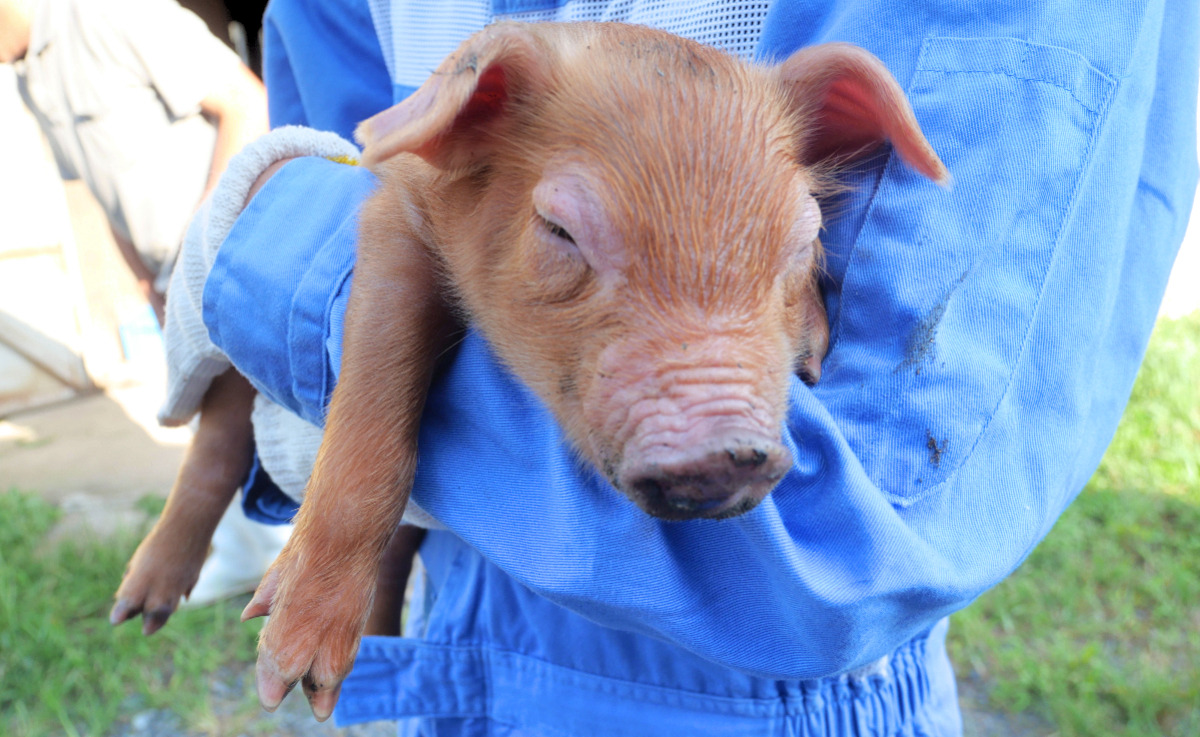 A Duroc piglet is held by a student on UTokyo’s Hands-on Activity Program at the Animal Resource Science Center in Kasama, Ibaraki Prefecture.

The trick to holding a piglet is to hold it horizontally and support its whole body. If the piglet feels unsupported in any way, it gets upset, and it makes sure to let everyone know by screeching constantly until its grievances are addressed. This happened quite a few times, but the professor would intervene, correcting how a student was holding the piglet and then gently cooing until the animal felt safe again.

Thus began the first day of the Hands-on Activity Program at the Animal Resource Science Center.

A nexus for animal science education in rural Ibaraki

The Hands-on Activity Programs are a project started in 2012 designed to provide UTokyo undergraduate students the opportunity to be exposed to different lifestyles and new experiences. Through these programs, students are expected to nurture their creative and expressive abilities, both of which are necessary to become knowledge professionals. In 2019, nearly 100 such programs were offered, with themes ranging from working at multinational companies in London to monitoring coral reefs in Okinawa. The three-day program at the Animal Resource Science Center presented five UTokyo undergraduate students who had little prior experience with farms the chance to become farmhands, working morning through evening to take care of the Center’s resident pigs, cows, goats and horses for the first two days, and visit commercial farms in the region on the third day, all while considering the costs involved in operating a farm.

Founded in 1949, the Animal Resource Science Center is a facility affiliated with the UTokyo Graduate School of Agricultural and Life Sciences. The facility is located on over 36 hectares of land in the City of Kasama, a rural area in Ibaraki Prefecture 100 kilometers northeast of Tokyo known for Kasama-yaki pottery and as the former residence of Morihei Ueshiba, the founder of the Japanese martial art of aikido.

In addition to serving as a place to conduct animal science research and interact with livestock, one of the Animal Resource Science Center’s main functions is as a teaching farm. Staff at the facility hold an average of 20 training sessions per year for various groups, including not only those from UTokyo but also groups from other Japanese universities, a university in Thailand and the Japan Farriery Association. Session topics range from animal hygiene and veterinary medicine to cow milking and hoof trimming (farriery).

“What’s so appealing about this farm,” explained Associate Professor Junyou Li, who is in charge of the facility’s day-to-day operations, “is that there are a variety of animals here rather than just one kind. We have cows, horses, goats and pigs, and we plan on getting chickens in the future. Also, other university farms may let you visit, but you can’t interact with the animals on the same level as you can here.” He added that being able to get up close to different kinds of animals in one place attracts interest from both within and outside of UTokyo.

Barn and silo at the Animal Resource Science Center

It was late morning on a sunny September day when the train carrying the five undergraduate students arrived at Iwama Station in Kasama. Li welcomed them and drove them to the farm, which is about 6 km away. Once there, the students settled into their on-site accommodations and ate lunch. Then, after receiving a set of work clothes, everyone was told to get dressed and to put on boots at the decontamination area. From there they would go to the pig shed. 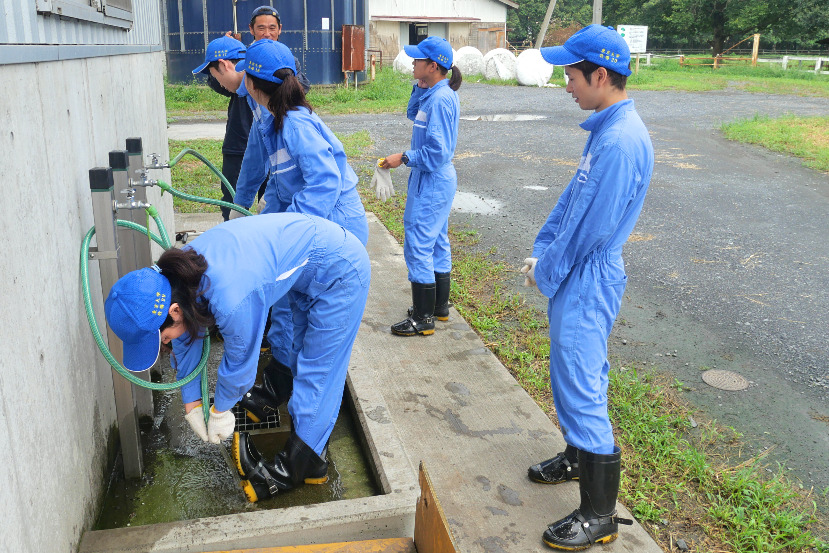 Students rinse off their boots before entering the farm area. To prevent people from carrying diseases harmful to animals, everyone must wear boots and wash them thoroughly when entering and leaving the farm. 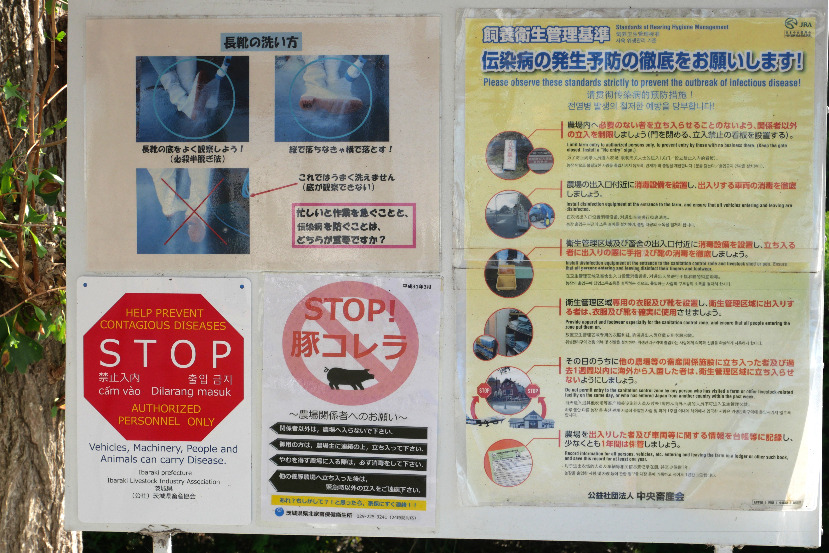 Signs posted at the decontamination area explain proper washing and disinfecting protocol for preventing hog cholera and other contagious diseases.

The students were tasked with feeding and brushing the pigs and shoveling the animals’ manure, while also getting to hold the piglets. The pen had around 50 pigs of various breeds, including English Yorkshire and Duroc. They seemed to enjoy the attention that they were getting from the excited students as they happily munched on their feed and wallowed around in water. 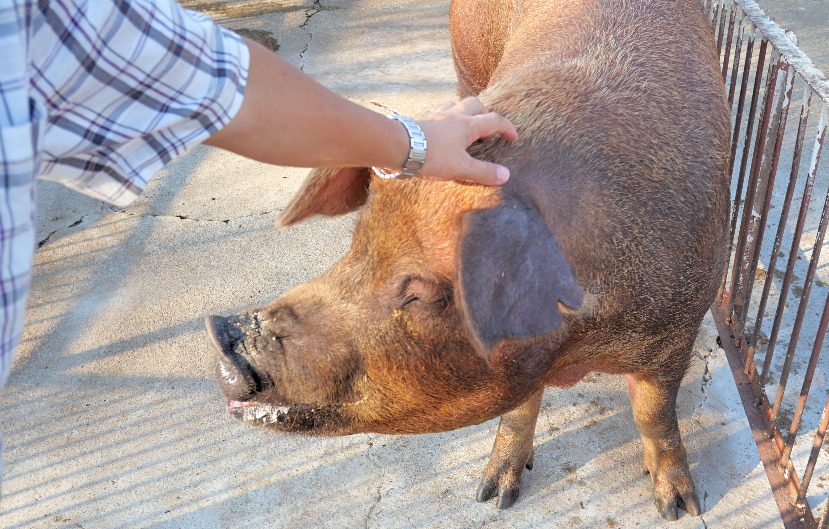 Associate Professor Junyou Li pets a Duroc pig. Duroc is a domestic pig breed from the United States, where it was bred in the early 1800s.

Day 2 — Cows and goats and horses, oh my

After a 7 a.m. breakfast and donning the work clothes again, the students set off for their longest day, which would include taking care of cows, goats and horses, as well as getting to operate farm equipment. They started out with milking cows, which is a multistep process first demonstrated by the farm’s veterinarian. After the students took turns wiping the udders, doing the preliminary milking and attaching the milking machines, they then fed the cows, swept the barn and led a cow to a scale to be weighed. 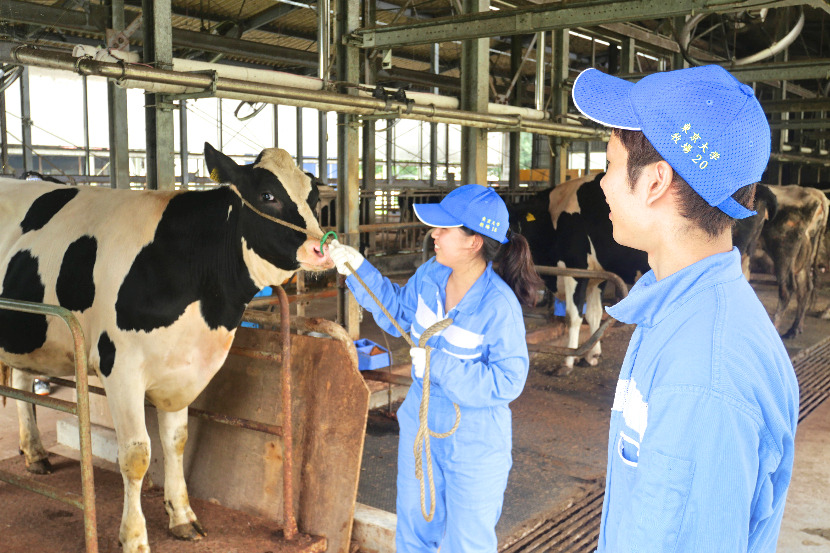 A student leads a cow onto a scale for weighing. Regular weighing of livestock can help identify health problems.

Next, Li had the students visit another area of the farm where the heavy machinery is kept, and two farmworkers there instructed them on how to operate an excavator and a tractor. Students took turns digging a hole with the excavator to help uproot the trunk of a tree that had been recently cut down. Controlling the machine using its many multidirectional levers was confusing at first, but the students took to it quickly, with some even making good progress on the hole. 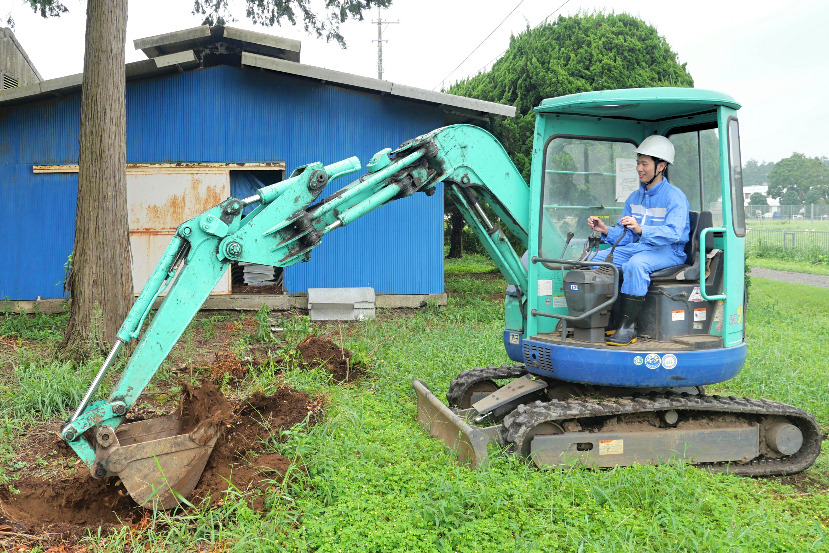 Yugo Funato, a third-year student in the Faculty of Engineering, uses the farm’s excavator. 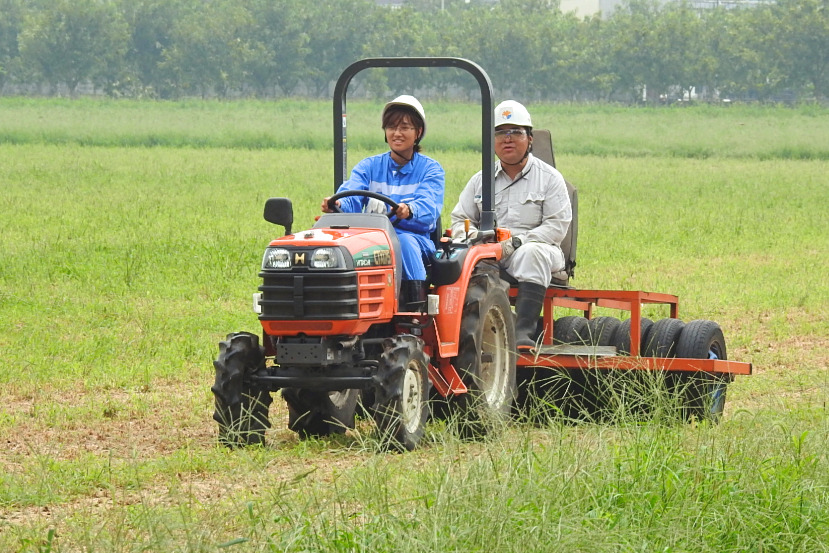 Minori Kamijo (first-year student, Natural Sciences II course) drives a tractor around a field under the supervision of one of the farmworkers. Photo courtesy of Junyou Li.

Next was the goat house. The students gathered up hay in large orange scoops and emptied it in the troughs along each side. The goats were so excited to eat that they rushed over to the troughs before the hay had been completely dumped out, getting hay on their heads. After scooping up hay, it was time for the students to scoop up the goats. At the professor’s direction, each student went into a pen and picked up a goat. The goats were nervous at first, but they relaxed once firmly held in the students’ arms. Compared to the piglets, the goats were much larger and heavier, so holding them for long periods of time was a challenge. 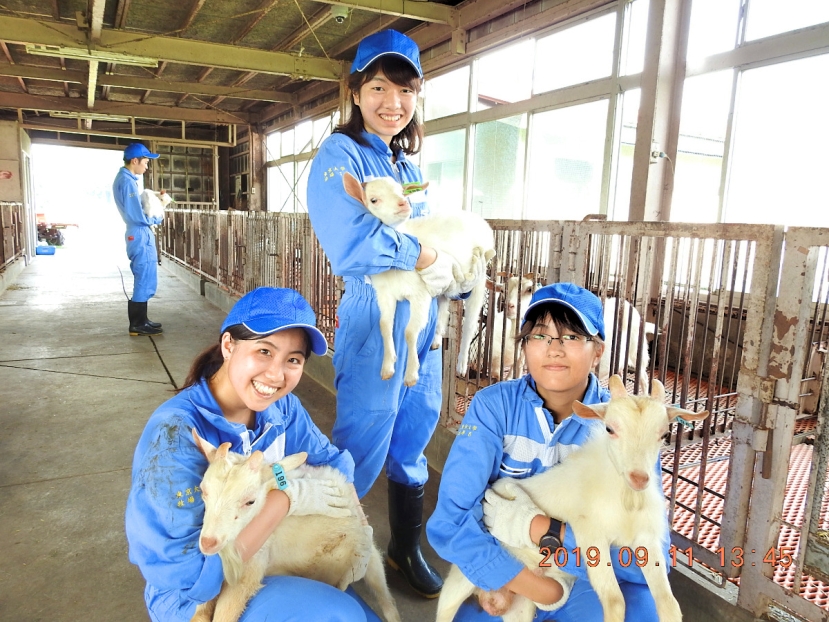 One of the workers also explained to the students how they medicate goats, which is by putting medicine in their feed, and marking ones that have received medicine with paint. He then gave a demonstration of hoof trimming, a necessary procedure for maintaining good foot and leg health in goats and other hooved animals. 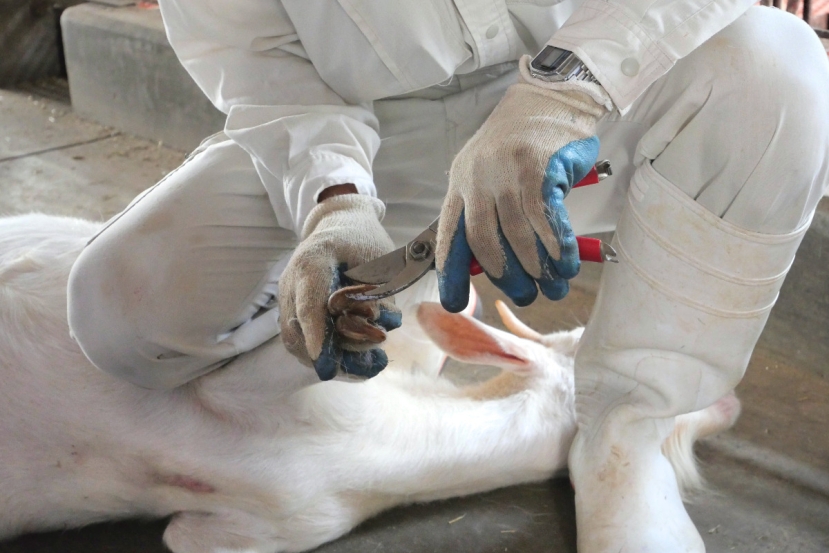 A farmworker demonstrates hoof trimming, a necessary procedure for maintaining good foot and leg health in goats and other hooved animals. 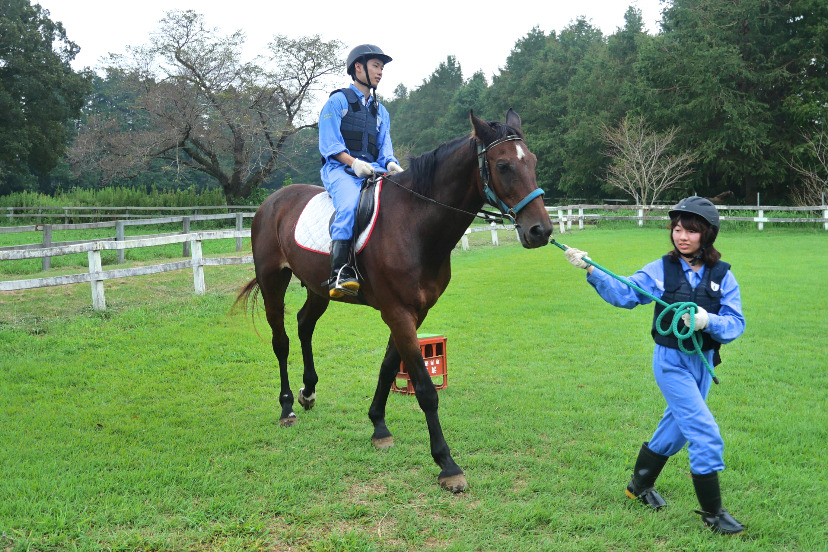 Mikuru Kudara leads a horse in a circle around a pen while Yugo Funato rides on its back.

The last stop of the day was the stables. As a reflection of its horse-breeding and -training history, the farm’s 14 horses include several South American Criollo, a French Selle Français, a German Hanoverian, an Irish Draught and a retired Thoroughbred racehorse. The students led some of the horses back to the stables and prepared their feed, using a customized mixture for each horse. Then, students and horses alike suited up for the horseback riding experience. Though it was hot and they had already had a busy day, the prospect of riding horses filled the students with energy. With the help of the two workers, pairs of students took turns mounting one of two horses and leading it in a circle around the pen. The students beamed as they trotted along, happy to have this opportunity to do something they couldn’t easily do in Tokyo.

After riding, the students fed the horses some hay and headed back to the common area for a barbecue dinner, where they got to enjoy all the meat they could eat. On the menu was kuributa, or “chestnut pigs,” called such because of their diet of chestnuts. Li and others at the farm have been developing this variety of pork. Students compared the taste of kuributa to regular pork, and concluded that the kuributa had a smoother texture and more robust flavor. 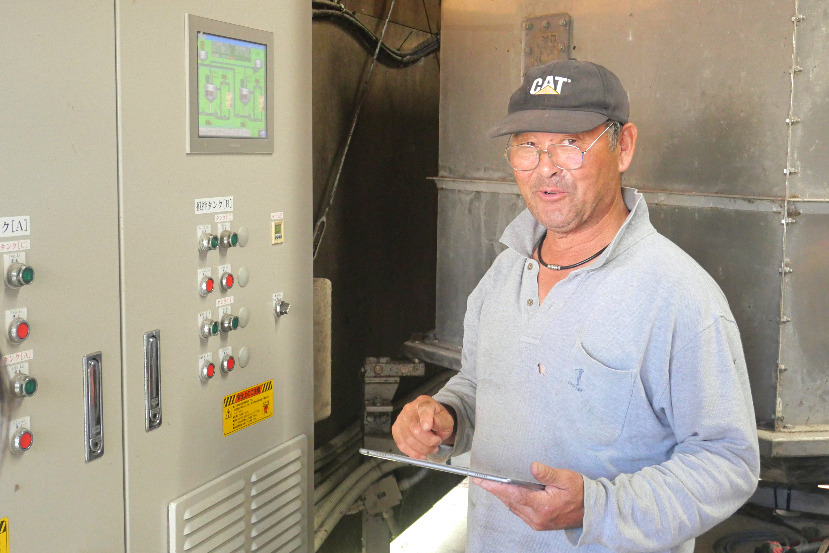 To deepen the students’ understanding of farms, the final day of the program had them leave the Animal Resource Science Center to observe two commercially run farms in other parts of Ibaraki Prefecture. The first stop was Kikuchi Farm, a pig farm about 40 km away in the City of Hokota. Masaru Kikuchi, the owner, took the students on a tour of his farm, showing them how feed and waste for the over 2,000 pigs raised there are managed. Then, following lunch at a local restaurant, Li brought the students to Pioneer Farm, a dairy farm in neighboring Omitama City. Shuichi Asakura, the head of that farm, introduced the students to his many Holstein cows, including young calves, and let the students witness a Swedish automated milking robot in action. 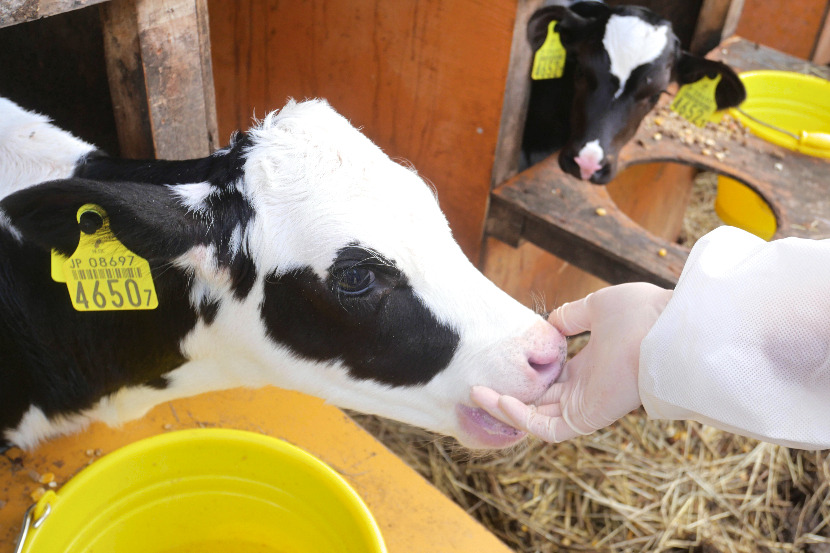 A young calf at the Pioneer Farm in Omitama, Ibaraki Prefecture, sucks on a student’s fingers. Calves instinctively want to suck on anything that resembles an udder, including fingers. 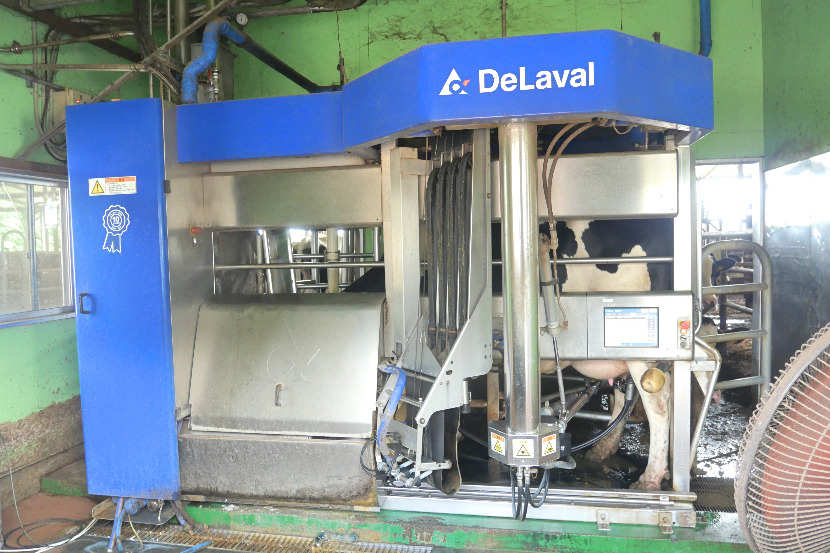 A cow is milked by an automated milking robot at the Pioneer Farm. Cows enter voluntarily when they are ready to be milked and exit when finished.

After the visit, the students went back to the Animal Resource Science Center to give reports on what they learned in the past three days. At the beginning of the program, Li had divided them into two groups to estimate the feed cost for pigs and cows. Thanks to questions they had asked the farmworkers at both the UTokyo farm and the commercial farms, and some quick math, the students were able to roughly estimate the cost and explain their answers to the professor and fellow students. 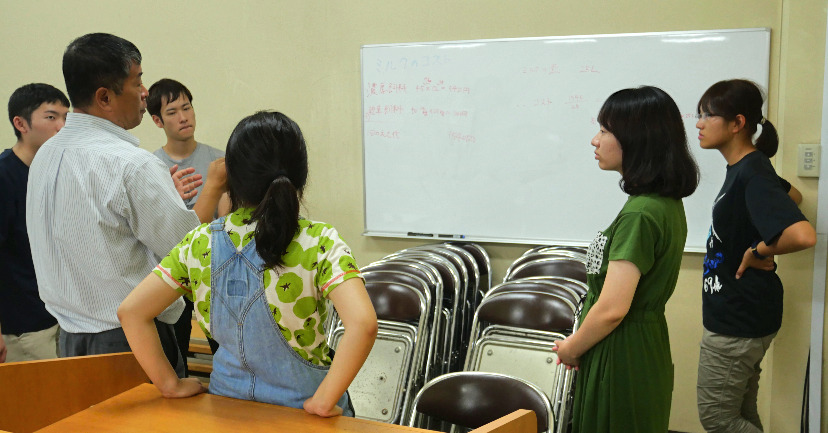 Li talks to the students about their presentations on feed costs for pigs and cows.

Following the presentations, it was time for the program to come to an end. Everyone packed their bags and got into the professor’s van again to head to the train station. In a couple of hours, they would be out of Ibaraki and back to their everyday lives, but the memories of what they experienced during the program no doubt left a lasting impression, giving them a distinct appreciation for farming and animal science. 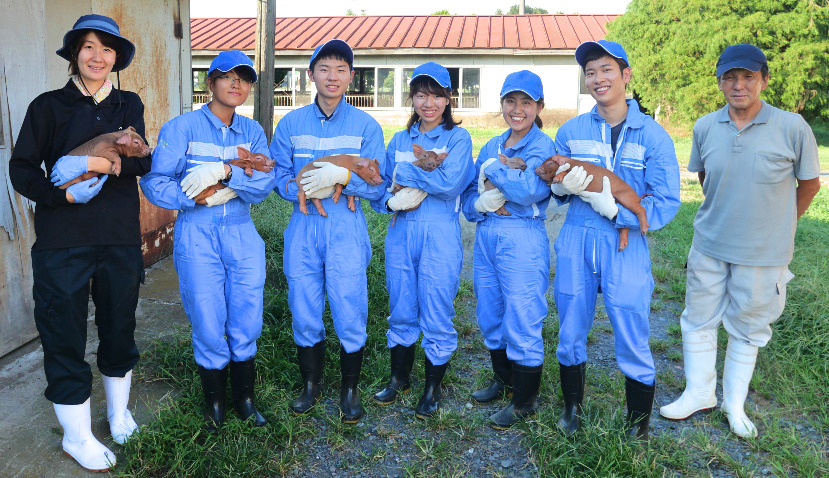