With a view of having a better understanding of the alumni activities at overseas universities so that our own can be made more lively and fruitful, we exchange ideas with the alumni of world leading universities.

The *IARU Alumni Associations Network connects the IARU alumni directors. Alumni associations are key to the long-term growth of the IARU institutions. In addition to the exchange of experiences and best practices, the delegates discuss at their summits several new ideas for joint programs and activities. One of the objectives is to connect like-minded alumni worldwide through a networking event hosted at the end of the International Alumni Summit/ Presidents’ Meeting or other related events.

- The 8th IARU Alumni Associations Summit was held in the University of Oxford from October 24 through 26, 2016. 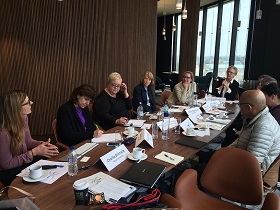 The IARU (International Alliance of Research Universities), established in 2006, is a network of eleven international research-intensive universities. IARU promotes institutional joint work among the member universities. Projects cover a broad range of topics, ranging from equal opportunities, technology transfer, technology-enhanced learning, research administration, libraries, open access, alumni associations, etc. As one of the projects, IARU forms a community consisting of directors of alumni associations in each university. The community annually holds an “Alumni Associations Summit” where they exchange experiences and best practices, explore issues that present challenges at each institution, and also discuss new ideas for joint activities.
This year, nine directors out of 11 gathered at the University of Oxford campus. Setting issue-oriented themes, the Summit covered various topics such as how best to host alumni events with impact, how best to harness social media to effectively communicate with alumni, how best to build reliable alumni database, and how best to use metrics to evaluate alumni programs.
On the last day, the IARU Alumni Networking Reception was held in the Savoy hotel in London, featuring a talk by Professor Richard Hobbs, head of Primary Care Health Sciences at the University of Oxford. Over 200 alumni joined the reception with four attendees from United Kingdom Akamon-Kai. 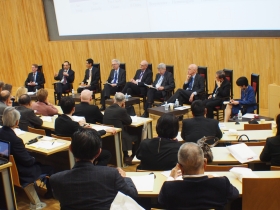 IARU World Alumni Forum was an event especially for the alumni of universities belonging to the alliance of 10 leading international research-intensive universities, IARU, organized by the IARU Alumni Associations Community, and hosted by the Alumni Office of the University of Tokyo. The forum consisted of keynote speeches and a series of panel discussions, inviting world-famous leaders as speakers from academia, industry and politics who are alumni of IARU-member universities and was concluded with a panel discussion with some of the IARU member presidents.

- Networking reception
On March 1, 2015 at UTokyo to coincide with the IARU Presidents’ Meeting.
On October 29, 2015 in Sydney hosted by Australian National University to coincide with IARU Alumni Associations Summit.
Top

Alumni Networks with Other Universities

In the evening of the same day, the 2018 general assembly meeting of the Seoul National University Alumni Association was also held. Mr. Mutsutake Otsuka, President of the UTokyo Alumni Association, attended this event and gave a congratulatory message.

On November 6, 2015, the UTokyo Alumni Association signed its first Memorandum of Understanding (MOU) with the Seoul National University Alumni Association to develop relations between both associations. We will further develop alumni relations with other universities.
Inquiries about the content of this page: Alumni Affairs, Division for External RelationsSend inquiry