Why UTokyo?
Home > Why UTokyo? > In Depth > What is the Institute for Cosmic Ray Research (ICRR)?
In Depth

What is the Institute for Cosmic Ray Research (ICRR)?

Learn about the Institute Headed by Nobel Laureate Professor Kajita

The Institute for Cosmic Ray Research (ICRR), whose director is Professor Kajita, is one of the University of Tokyo's 11 Institutes, and is known as one of the world's only institutes that promotes research on a wide range of areas in cosmic rays in an integrated manner. The 2015 Nobel Prize in Physics came from this globally unique institute. In this article, we introduce the Institute from seven perspectives.

About the Logo
The ICRR logo, which is inspired by astrophysics phenomena such as supernova explosions, gravitational waves, Cherenkov light, air showers and shockwaves, was selected through an Institute-wide design competition. It is said that the winner was presented with a bottle of wine by the Institute's director at that time.
Top

So, what exactly are cosmic rays?

Microscopic "messengers" that come to Earth from outer space

A cosmic ray is the general term for extremely small particles with high energy (radiation) that travel around outer space. The presence of cosmic rays was first demonstrated in 1912 by Austrian physicist Victor Hess in his experiment using balloons. Cosmic rays are grouped into primary cosmic rays and secondary cosmic rays; the latter, which include neutrinos and gamma rays, are produced when primary cosmic rays collide with atoms in the air. Cosmic rays are valuable "messengers" from the far reaches of the universe that can teach us various pieces of information.

What is the history of the ICRR?

The origins of the ICRR lie in the Asahi Hut built on Mt. Norikura

The predecessor of the ICRR was a hut that was built on Mt. Norikura with money given by the Asahi Academic Grant which was used for research on cosmic rays. After receiving requests from researchers throughout Japan, this hut was made into the Cosmic Ray Observatory of the University of Tokyo in 1953. As Japan's first institute for joint research, the Observatory was utilized by many researchers both inside and outside the University. Later, the Observatory was merged with the Cosmic Ray Division of the Institute for Nuclear Study, which was located in Tanashi City, Tokyo, and reorganized into the Institute for Cosmic Ray Research. The ICRR was then relocated to the Kashiwa Campus, where it stands today.

Where is the ICRR?

With the Kashiwa Campus as its base, the ICRR has numerous facilities both inside and outside Japan

The ICRR is headquartered on the Kashiwa Campus (naturally, the office of the director is located there). Its important hub is located in Kamioka, where large-scale experiment facilities, such as KAGRA and Kamioka Observatory are placed. Its affiliated observatories are located in Norikura and Akeno. Outside Japan, the observation of air showers and Ultra-high Energy Cosmic Ray are conducted in the Tibet Autonomous Region and Utah (the USA), respectively. The ICRR is also preparing to conduct observations of high energy gamma rays in Paranal (Chile) and La Palma (Spain). 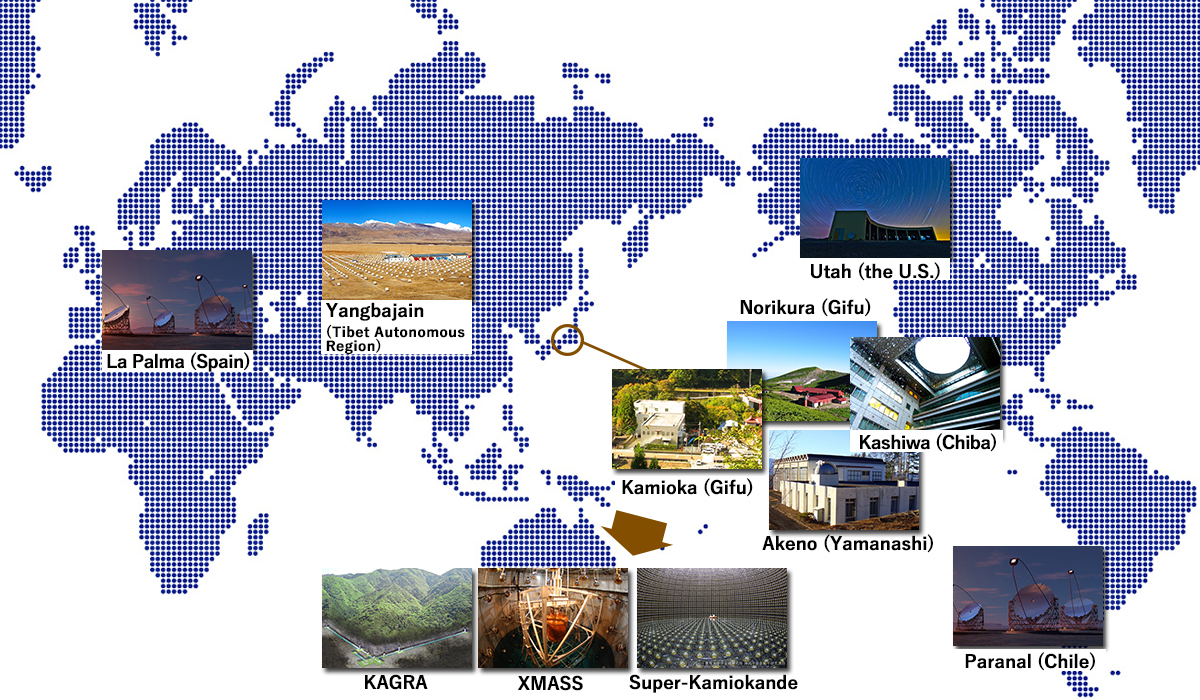 How is the ICRR organized?

Under the management of its director, the ICRR has three research divisions and five research facilities whose operations are supported by administrative staff. A total of 126 members, 63 academic staff and 63 administrative staff (including part-time staff), work at the ICRR (as of May 2015). Professor Kajita is the ninth director of the ICRR and the first head of the Research Center for Cosmic Neutrinos.

What is the goal of the ICRR?

To shed light on the mysteries of everything, from the vastness of the universe to the tiniest elementary particles

The objectives of the ICRR as headed by Professor Kajita are to analyze the universe mainly through research on cosmic rays, as well as to conduct research on elementary particles with approaches different from traditional methods using particle accelerators. Cosmic rays are important for the ICRR because they act as a bridge between the microscopic world of particles and the macroscopic world of the universe.

What's in store for the future of the ICRR? 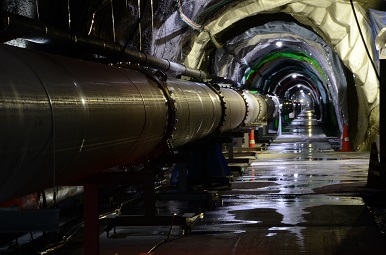 The ICRR plans to start the operation of Hyper-Kamiokande in 2026. Hyper-Kamiokande will be an experiment facility with a gigantic water tank that surpasses the capacity of Super-Kamiokande's (SK) tank. Also, the ICRR is working to promote the SK-Gd plan, which will improve the performance of SK dramatically through the addition of gadoliniums (Gd) to the facility's pure water.

As the representative of the Japan team, the ICRR also leads the Cherenkov Telescope Array (CTA) project in which more than 170 entities from 31 countries have participated. The objective of the project is to employ more than 100 Cherenkov telescopes to detect with high sensitivity ultra-high energy gamma rays.

The Large-scale Cryogenic Gravitational Wave Telescope, widely known as KAGRA (see picture), completed a test-run experiment in March 2016. Full-fledged experiments will start in FY 2017 when the second-phase construction of the experiment facility is completed. With KAGRA, the ICRR strives to lay the foundations of gravitational wave astronomy.
Top

Does the ICRR have mascots?

Yes, it has mascots that appear only during open campus events.

Although ICRR does not have an official mascot, there are mascots whose appearances are limited to the annual open campus event. Recently, these mascots have been featured on items such as pinback buttons and original card games, which are given as free gifts to people who come to the event. The future of the mascots, however, remains unclear. Please visit the event in autumn and keep on the lookout for these mascots!

The actual scientific phenomena are written in parentheses.  Additional explanations of the names are given when needed with asterisks.

* This article is a translation of an article that was originally printed in Tansei 32 (Japanese language only).