Many congratulations to all of you. You have been awarded a doctor’s, master’s, professional, or bachelor’s degree by the University of Tokyo. On behalf of the University, I extend my sincere congratulations. I also congratulate your families, who have supported you through your studies, and are present here today to join you in these celebrations.

This April, the University of Tokyo celebrated its 140th anniversary. You are graduating during this memorable year in the history of the University.

The first 70 years of the University of Tokyo coincided with the modernization of Japan, which began with the opening of the country to the world. One of the University’s first functions was to educate highly talented professionals to work with the Meiji government and transform Japan into a modern state. The aim was to gain acceptance from international society. In the beginning, the University embraced Western learning. But it also developed new learning by integrating Eastern and Western approaches. This has become a tradition at the University of Tokyo.

The second 70 years started with the reconstruction of Japan, physically and socially, after World War II. In the latter half of the 20th century, innovation in science and technology helped drive industrialization, expanding the global economy. In the meantime, fortunately, Japan achieved rapid economic growth and developed into one of the world’s most advanced and peaceful states. In this period, too, the University played an important role by educating many highly-skilled professionals for all areas of Japanese society.

Now, the University of Tokyo has just embarked on the journey of its third 70 years, a period we name “UTokyo 3.0.” In this time, we must envision the future direction of our society, and create new value aiming to contribute to the common good of humanity. This is the first year in this great project. You are the first of our graduates whose working lives will take place in this new era of UTokyo 3.0.

In this period of UTokyo 3.0, the University of Tokyo is working to create a better future for society. It is important that you also create your own future rather than wait for it to happen. I hope you will enjoy fulfilling lives after graduation and will contribute to the common good.

Today, I would like to tell you about two topics that might provide you with some hints for navigating your future. One is about our lifespan, the other about water and the environment.

As you all know, Japanese average life expectancy has become longer over the last century. According to the latest survey in July, life expectancy reached a new high. There are nearly 70,000 people over 100 years old in Japan, and the number is increasing by about 2,000 each year. In January this year, one academic society made a proposal to raise the definition of when senior citizenship starts from the current 65 years old. Indeed, people can work until an older age than before. This trend is true not just of Japan but also of many other countries thanks to improved nutrition and public health. I am certain that the coming 70 years will see the emergence of an entirely new and unprecedented society, in which we live together with a great number of senior citizens.

In June, the University of Tokyo became a designated national university corporation. This means that the University has greater autonomy. I would like to make good use of this greater freedom to start a new program in the next academic year. Under the current system, our academic staff retire at the age of 65. I plan to introduce a new system that will allow retirees who are still active to continue working with the University in some way. You might think such re-employment could take away jobs from young people. In fact, our objective is the opposite. This new system is intended to enable senior members to utilize their experiences to support the university. Meanwhile, this will allow us to hire more talented young individuals and give them time to engage fully in research and education. And of course, give more time for life events outside the university, involving your families, your personal goals, your health and personal activities. In other words, the system is designed to generate synergies between senior and younger members.

Instead of only the younger generation supporting the elderly, this will facilitate a system in which more older members are also able to support their younger colleagues. I hope this system will serve as a sustainable model for active social participation by people of all ages. We are aiming to create such models and present them to the world so that many people can benefit from them.

You have many years ahead of you, and some may be worried about future uncertainty. In my opinion, a longer life span means a longer period of time for activity and greater opportunities. You may experience setbacks, but taking on challenges time and again will surely enrich your lives. I hope you will take full advantage of the long time you have ahead of you.

Now, let us turn our eyes to the world. The 21st century has seen even more rapid advances in science and technology, as well as continued population growth. Meanwhile, humanity faces many shared challenges: environmental degradation, increased regional disparity, religious conflicts and other problems. We have long regarded our Mother Earth as a limitless and unchanging home. But we have come to realize that the earth is not infinite.

We face the challenge of how to preserve this finite, shrinking earth. We need to achieve sustainable development of humankind and the earth as a whole. At the same time, we need to encourage individuals to engage freely in the activities they choose. As one possible approach, let me talk about a case involving something that you are all familiar with: water. 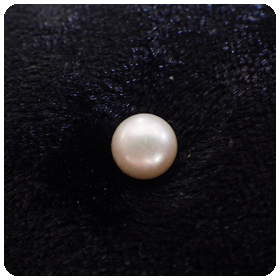 Today I’ve brought something with me. It’s so small you probably can’t see it from your seats, but this is a pearl.

Diamonds and other jewels gain their brilliance only after being processed by human hands. But pearls are nature’s work of art. The School of Science has a Marine Biological Station in Misaki on the southwestern tip of the Miura Peninsula, in Kanagawa Prefecture. The station is one of the oldest marine research facilities in the world and marked its 130th anniversary last year. This facility was built at the suggestion of American zoologist Edward Morse, who discovered the Omori shell mound.

Professor Morse came to Japan to verify the Darwin’s theory of evolution. It was in 1877, the year when the University of Tokyo was founded. He was the first professor of zoology at the University. Convinced that diverse marine organisms would play an important role in the development of zoology, Professor Morse proposed that the University should establish a marine research station. The University took up his proposal and set up this station in Misaki, a location with rich marine biodiversity.

It was at this marine research station that the world’s first pearl farming was conducted. About 130 years ago, Professor Kakichi Mitsukuri became the first Japanese professor of zoology at the Faculty of Science and the first director of the Misaki Marine Biological Station. He earned his doctorate in the United States for research on shellfish. In this station, he researched pearl farming and encouraged and instructed Kokichi Mikimoto, the founder of the Mikimoto company, on how to produce cultured pearls. Mr. Mikimoto later succeeded in establishing pearl farming in Ise-Shima, Mie Prefecture, and became very successful in the pearl business. It all started from the pearl farming at the University’s marine station on the Miura Peninsula.

Clean seawater is essential for pearl farming. Unfortunately, in the years that followed, the quality of seawater in the Miura area deteriorated because of industrialization, making it impossible to produce cultured pearls.

Many decades since then, a change in public mindset combined with government efforts have greatly improved the quality of water on the Miura Peninsula and rivers in and around Tokyo. In 2013, the University of Tokyo, Kanagawa Prefecture and other organizations worked together to launch the “Miura pearl project” to revive pearl farming. This is a Miura pearl produced by that project.

During the rapid growth after the war, Japan experienced serious environmental pollution. However, Japan overcame such problems through pioneering efforts, making the seas around Misaki clean again. It enabled us to preserve and pass on to the next generation the wealth of biodiversity surrounding Misaki, or what biologists worldwide used to call “the sea of miracles.”
The Misaki pearl project is the symbol of this broad and sustained effort.

It is our duty to preserve a pleasant, beautiful environment not just for our own generation but also for the next generation. As graduates of the University of Tokyo, every one of you has the responsibility to take the lead in preserving our environment. Whenever you see a pearl in the future, I hope you will remember this story about the revival of the Miura pearl, and remember that anything is possible if you set your mind to it.

You have made many friends at the University of Tokyo, a meeting place of excellent students and researchers from around the world. You have met with people of different nationalities, religions and with different values, and you have learned about the importance of appreciating and respecting such diversity. I believe that the ties you have built at this University will help you in your life ahead. I hope that you will keep this global awareness and tackle issues, such as human rights, inequality and environmental problems.

The unfading beauty of the perfectly round pearl is often taken to represent longevity, good health and happiness. As such, pearls have traditionally been used as accessories and gifts. I hope you all will enjoy good health and make the most of your time in this age of longevity. I hope you will contribute to making a peaceful and sustainable world by using your strengths and ties developed at the University of Tokyo to create new value and contribute to the collective wisdom of humanity.

As alumni, I ask that you do all you can to make the University of Tokyo a better place for education and research for all our members, past, present, and future.

Finally, I would like to wish you all well and every success in your future lives.