Why UTokyo?
Home > Why UTokyo? > In Depth > The Expansive Range of Humanities Subjects at UTokyo, Visualized
In Depth

The Expansive Range of Humanities Subjects at UTokyo, Visualized

A Categorization by Fundamental Kanji Characters


Kenji Sato
Professor
Graduate School of Humanities and Sociology In an effort to discern the scope of the humanities research conducted at UTokyo, our focus turns to kanji characters. The editor of Tansei sampled the Japanese names of the research areas of the approximately 800 academic staff members affiliated with humanities organizations throughout the University, calculating how many academic staff members are researching in areas with certain characters in their names. The results are displayed below. Can we say that these results mean something? Or do they mean nothing?

To boil down the scale of the humanities research, or, to phrase it differently, the diversity of the humanities and social sciences at the University of Tokyo, into single characters included in the research areas of academic staff members, and putting this information into a distribution map. A truly unique endeavor, I believe, but to accurately evaluate such a quixotic task, let me turn to a small book published 135 years ago when the University of Tokyo had only four Faculties, each expressed by one character: 法 (hou, Law); 理 (ri, Science); 文 (bun, Letters); and 医 (i, Medicine). 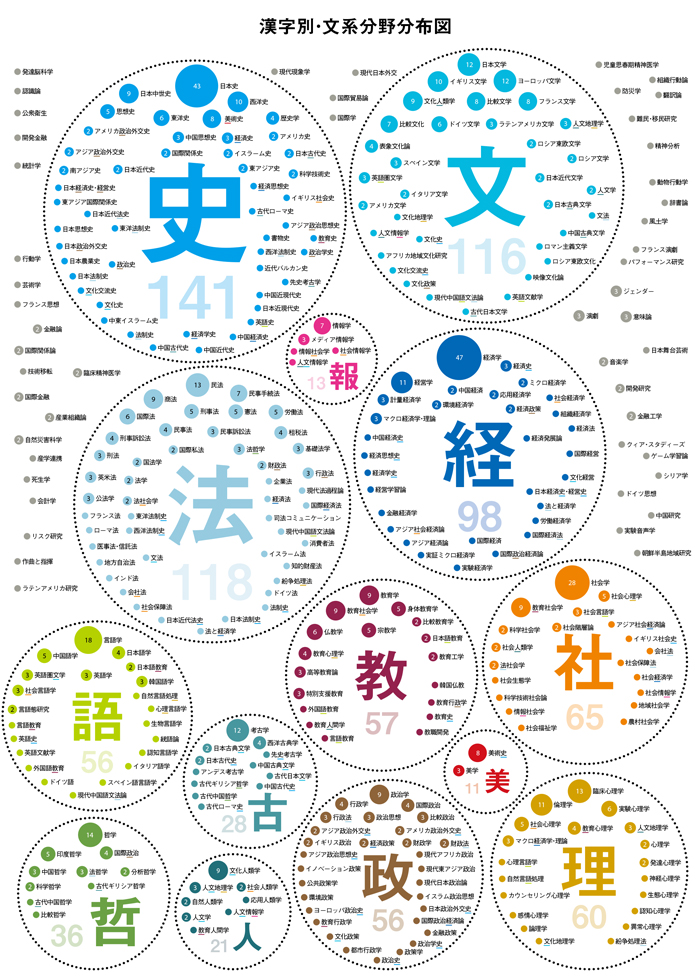 In 1881, the three Faculties of Law, Science and Letters* published a work titled Dictionary of Philosophy (Tetsugaku Jii). Throughout the pages of this book, we can see the daunting spirit of the authors as they attempted to render academic terms from around the world into usable Japanese words. The English "concept" and the German "Begriff" were christened 概念 (gainen); the word 存在 (sonzai), which appeared in Chinese classical works, was appropriated to describe the idea of "existence" discussed in Western philosophy. Numerous other phenomena were given new names: for instance, "paradox" became 逆説 (gyakusetsu), "inertia" became 惰性 (dasei), and "omniscience" became 全知 (zenchi). The revised translation of "science" from 理学 (rigaku) to 科学 (kagaku) and its subsequent proliferation also can be traced back to this book. While serving as a translation glossary, this work also constituted a list of new words compiled for the purpose of returning to the roots of phenomena to consider them at their source—in other words, philosophizing.

My reason for recalling this classic text does not come from simple nostalgia. Rather, it is because this book touches upon the ceaseless task that is creating words, the fate consigned to the various disciplines in the social sciences which must use words as tools to weave together the fruits gained through the continued exploration of the world. Although this book is a representative work of the age in which new kanji words were being created, 40% of the words listed in it are no longer used at all in the modern age, and have thus faded into obsolescence. So, was compiling this book a fruitless endeavor? Certainly not. The energy put into seeking out and devising new words is precisely the ability needed to evaluate options and aim for better, improved solutions to issues.

The catalyst driving this collaborative creation of words was the comprehensive versatility of kanji, characters which have been used for 1500 years since the 4th or 5th century. Each of these characters, which formed the basis of Chinese civilization, illustrates the various elements comprising their subject as well as a general idea of its meaning. Within the public forum of knowledge in East Asia, the role fulfilled by this writing technology rivals the contributions of Latin to the arts and sciences in Europe. The pronunciation of the characters and words of both kanji and Latin varied so much by region that even those from regions using the same language system could not understand one another. Despite these differences, the ideas conveyed by both languages could be understood by others when written, demonstrating that kanji and Latin possessed universal and international utility. Latin and kanji transcended the national borders of communities separated by differences in spoken language, achieving with the written word the creation of a communal space for the reading public.
The intellectuals of the early Meiji period were well-grounded in not only Western but also Chinese learning. Thus, they did not let trifling irregularities hold them back; they combined words in every manner conceivable, forging new terminology that could accommodate thoughts and technologies that were teeming with a diversity of unknowns. Novel concepts and functions that could not be completely conveyed using one kanji character were explained by combining two. Through this effort, a wide array of names for academic disciplines in modern Japan were produced, including 心理学 (shinrigaku; psychology), 理財学 (rizaigaku; later changed to 経済学 keizaigaku; economics), 政治学 (seijigaku; political science), 世態学 (setaigaku; later changed to 社会学 shakaigaku; sociology), and 博言学 (hakugengaku; later changed to 言語学 gengogaku; linguistics).

The constant influx of new departments and research areas occurring nowadays brings with it new conventions in naming. The research themes of these freshly-minted disciplines cannot be adequately summarized using two- or four-character compounds; they are often thus rendered as a series of eight to more than ten characters. Moreover, as certain words in their original language sound more accurate than their Japanese translations, incorporating the katakana versions of these words into the names of disciplines and research areas is becoming increasingly common. While this naming trend is understandable, a discipline with such a name can end up all alone parading around its unique name, making it difficult for the original purpose and research theme of the discipline to be communicated. If the public does not acknowledge the idea behind the words used in the name and share a common image of what they mean, the words will fail to establish themselves in the public lexicon.

Contemporary trends and the number of each kanji “submitted” are both important factors in selecting the character for the Japan Kanji Aptitude Testing Foundation’s “Kanji of the Year” event held every December at Kiyomizu Temple. However, with regards to analyzing the data accumulated for this distribution map, we do not need to take such factors into account. That being said, I find it thought-provoking to consider anew whether there are one or two kanji characters hidden at the core of the foundation of the humanities research that each of us conducts every day. Perhaps this map will lead us to discovering profound connections between researchers who have never met each other in Faculties that are far apart.

About the Distribution Map

Research areas within the dotted circles that have at least one of the other 13 kanji in their names have those kanji underlined in the colors of those kanji.
* Note: The University of Tokyo was established upon the merger of Tokyo Kaisei School (South Branch School of Daigaku) and Tokyo Medical School (East Branch School of Daigaku) in 1877. At the time of the University’s inception, the Faculties were not strongly independent of one another. The three existing Faculties (Faculty of Law, Faculty of Science and Faculty of Letters) were therefore often referred to together as the “Faculties of Law-Science-Letters” or the “three Faculties.” The reason for this treatment is not unrelated to the fact that one of the predecessors of the South Branch School of Daigaku was the Bansho Shirabe-sho (Institute for the Study of Barbarian Books). The Shirabe-sho was a research and educational institution established by the Tokugawa shogunate, which had strongly sensed the necessity of understanding advanced Western learning. A wide range of subjects were studied at the Shirabe-sho, from linguistics and mathematics to astronomy, chemistry, engineering, art and natural history.

** This article was originally printed in Tansei 33 (Japanese language only).